Accessibility links
Architects, Rehabber Find Riches In Detroit Ruins Detroit is full of architectural ruins and abandoned houses, but some resourceful people are mining the city for profit. There's an architect couple who adapt and restore large buildings downtown, a company that strips buildings of their interior treasures and a real estate investor who rehabilitates houses and flips them. 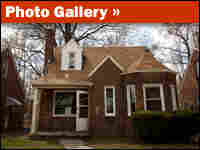 The electric lights of the Fox Theater offer a classic view of Detroit. The structure is one of the city's many historic buildings, and its lights are visible for many blocks because of Detroit's many vacant lots.

This city has lost about a million people since the population started declining in the 1950s. Since then, people have been trying, usually without success, to bring the city back. Those efforts take on special urgency now that the auto companies are in trouble. But even today, people are trying to make money in Detroit's real estate market.

Architects Bob and Maureen Kraemer are two of them. They've invested in the Broderick Tower, a vacant skyscraper in downtown Detroit.

The Kraemers have grown their company during good and bad times by taking any work available. They started out doing high-end interiors for dot-coms. Once the money fell out of that market, they say, they started doing historic rehab, not to mention hotels and even a client's tree house.

Now they want to turn the Broderick Tower into luxury apartments — which matters because cities tend to recover only when people want to live in them.

The Kraemers are putting $100,000 of their own money into this skyscraper, alongside the tower's investors. They think the project can pay off partly because it's a historic building. Tax credits may pick up more than one-third of the construction cost.

And they're not the only people expecting a benefit.

Climbing the stairwell to the 36th floor of the Broderick Tower, passing the open doors on each level, feels like one of those TV programs where an underwater camera peeks inside a shipwreck.

Two men are easing radiators down the stairs. They're hand-trucking 200 pounds of steel.

The men work under the eye of Stewart Beal, whose client wants the radiators for another building. His demolition firm is salvaging Detroit's ruins. Beal says his firm is doing legally what many people here do illegally. "They break into buildings, strip copper out, strip metal out," Beal says. In the most egregious cases, "they actually will cut down active light poles."

Many people want to salvage what they can from Detroit's real estate market — some in large properties, some small.

Andrew Fox, 32, was raised in Detroit. He owns 45 modest homes, and he's still buying. He renovates them and then rents them out.

Fox recently showed a house to a woman who said she wanted to rent it that day. The reason: The house where she and her children live keeps getting broken into.

Fox used to work for a company that made car seats. In 2002, he bought his first house for $32,000. Two years later, he sold the property for more than double what he paid. That, he says, was his introduction to the power of real estate.

Fox kept an eye on that house after he sold it, and then the market collapsed.

Spotting Opportunities In The Rough

What happened to that house is a reminder that Detroit real estate isn't just depressed — it's suicidal.

"It hasn't just gotten worse; it's dramatically gotten worse," Fox says. "Matter of fact, that house isn't even there anymore. It was burned down." And it's in a neighborhood where he wouldn't buy property anymore, he says. "I wouldn't even drive in that area anymore."

Fox tries to buy homes in neighborhoods that seem at least a little more stable. In the house he bought last week — a tiny bungalow for $5,100 — the ceilings are collapsing and the paint is horrible. The carpets smell awful. To Fox, this is an opportunity even if it's not immediately obvious to most.

Peering out the windows of the tiny home, another opportunity comes into view. There's a house across the street. The door looks kicked in, but it's a nice enough house that Fox wants to look inside.

That broken door probably means somebody took the plumbing and even the furnace. But Fox might still want to buy it.

Fox shoves aside the wreckage of the door and walks inside. Sometimes opportunity doesn't even have to knock.