Accessibility links
The Real Story Behind 'The Soloist' The friendship between Steve Lopez, a Los Angeles Times columnist, and Nathaniel Ayers, a homeless musician, has inspired newspaper columns, a book and now a movie. In 2008, Lopez joined Fresh Air to describe his friendship with Ayers. 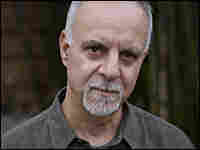 Lopez met Ayers four years ago, when Ayers was a homeless musician on Skid Row in Los Angeles. Lopez learned Ayers had been a promising violinist, and that he had left the prestigious music program at the Juilliard School because of his struggle with mental illness.

Lopez chronicled Ayers' struggle in several columns at the Los Angeles Times. These columns inspired readers to send instruments to Ayers through Lopez. The friendship that Lopez formed with Ayers and eventually helped the musician get off the street, settle into an apartment and find treatment for his schizophrenia.

Lopez says his friendship with Ayers has "always been a two-way street, it's not just me doing for him." The writer explains that the musician re-ignited his passion for journalism and gave him a sense of well-being: "You know, there's this humility, there's this good feeling I have from giving something," Lopez says.

Lopez published a book about Ayers called The Soloist: A Lost Dream, and Unlikely Friendship, and the Redemptive Power of Music. The book inspired the recently released movie The Soloist starring Jamie Foxx and Robert Downey Jr. 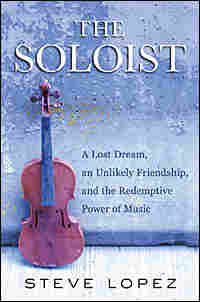 I can't get the image out of my head, this odd picture of grubby refinement. But when I go back to look for the violinist in Pershing Square, I come up empty. His disappearance only makes the mystery more provocative.

Who was he? Where did he go? What is his story?

Three weeks later, he's back, reappearing in the same spot, and I watch from across the street for a while before approaching. His playing is a little scratchy and tentative, but just like before, it's clear this is no beginner. There'd been some serious training in there, somewhere along the way. He doesn't appear to be playing for money, which seems strange for a homeless guy. He plays as if he's a student, oblivious to everyone around him, and this is a practice session.

Strange place to practice. The ground shakes when buses roar by, and his strings are barely audible in the orchestra of horns, trucks and sirens. I gaze at the tops of buildings adorned with gargoyles and grand cornices. Men and women move about, duty-bound, ignoring him for the most part as they disappear around corners and into entryways. The man plays on, a lone fiddler. He throws his head back, closes his eyes, drifts. A portrait of tortured bliss.

When he pauses, I move in.

He jumps back, startled just as before.

"I remember your voice."

He's still suspicious of me, suspicious of everything around him, it seems. He says he was trying to remember a Tchaikovsky piece he once knew quite well, but now it is as elusive as the meaning of a dream. It's obvious that he's troubled in some way, like so many others who wander the streets as if they inhabit a different planet than the rest of us, wrapped in many-layered outfits to keep from coming unraveled. He's wearing a ratty blue sweater with a light brown T-shirt over it and the collar of a shirt spilling out over the top of it all. Wrapped around his neck, like a scarf, is a yellow terrycloth towel. His pants hang low on his waist, fitted for a man three sizes bigger, and his grimy white sneakers have no laces.

He tells me his name is Nathaniel Anthony Ayers. From Cleveland. He's going to keep practicing until he's proud of what he hears, he says, and I tell him I might like to write about him for the L.A. Times.

"Seriously?" he asks. "You'd really want to write about me?"

He's a handsome guy, lean and fit-looking, with a strong jaw and clean white teeth. He reminds me a little of Miles Davis. I ask where he lives and he says at the Midnight Mission, one of the biggest rescue operations on nearby Skid Row. Not inside, he specifies. But on the street, though he showers and takes some meals inside.

"Why not sleep inside?"

I wonder how safe it can be for a man trying to reconnect with Tchaikovsky as drug dealers, prostitutes and hustlers work streets teeming with the lame and the afflicted. Skid Row is a dumping ground for inmates released from the nearby county jail, and it's a place where the sirens never stop screaming.

"Maybe I'll come by and visit you at the mission," I tell him.

He nods, but I can see he doesn't trust me. He tucks the violin back under his chin, eager to get back to his music, and I know that if this one ever pans out, it's going to take some time. I'll have to check back with him now and again until he's comfortable enough to open up. Maybe I could go on his rounds with him over the course of a day or so, see if anyone can help fill in the blanks in his story or explain his condition. As he begins to play, I wave good-bye, and he responds with a suspicious glance in my general direction.

Two weeks later, I go looking for him once more and he's disappeared again. I stroll over to the mission at Fourth and Los Angeles streets, where I see street people by the dozens, some of them drug-ravaged, some of them raving mad, some of them lying so still on the pavement it's hard to tell whether they're napping or waiting for a ride to the morgue.

I check with Orlando Ward, the public information man at the Midnight. He tells me he's seen the violinist around, but doesn't know the backstory. And he hasn't seen him lately.

Weeks go by and I get distracted by other things, shoveling whatever I can find into that empty space on the page. And then one day while driving to work from my home in Silver Lake, a neighborhood five miles northwest of downtown, I cut through the Second Street tunnel and there he is, putting on a one-man concert in a location even noisier than the last one.

He remembers me this time.

He says he's been around, here and there. Nowhere special.

A car whooshes by and his mind reels.

"Blue car, green car, white car," he says. "There goes a police car, and God is on the other side of that wall."

I nod, not knowing what to say. Maybe he's a little more unreachable than I realized. Do I take notes for a column, or do I make a few calls to see if someone can come and help him?

Nathaniel says he isn't so sure.

"I don't know how God works," he tells me sincerely, with an expression that says anything is possible.

I scribble that down in my notebook, and I also copy what he's written on his shopping cart with a Magic Marker:

I ask Nathaniel if he has moved to this location to be near the concert hall and he says no, he isn't even sure where Disney Hall is, exactly.

"Right up the hill. The great big silvery building that looks like a schooner."

He says he moved to this spot because he could see the Los Angeles Times Building two blocks away.

Having lived in Cleveland, New York and Los Angeles, Nathaniel tells me, it's reassuring to be able to look up at the L.A. Times Building and know where he is.

He plays for a while; we talk for a while, an experience that's like dropping in on a dream. Nathaniel takes nonsensical flights, doing figure eights through unrelated topics. God, the Cleveland Browns, the mysteries of air travel and the glory of Beethoven. He keeps coming back to music. His life's purpose, it seems, is to arrange the notes that lie scattered in his head.

I notice for the first time that his violin, caked with grime and a white chalky substance that looks like a fungus, is missing an important component or two.

"Your violin has only two strings," I say. "You're missing the other two."

"All I want to do is play music, and the crisis I'm having is right here. This one's gone," he says of the missing top string, "that one's gone, and this little guy's almost out of commission."

His goal in life, Nathaniel tells me, is to figure out how to replace the strings. But he got used to playing imperfect instruments while taking music classes in Cleveland's public schools, and there's a lot you can do, he assures me, with just two strings.

I notice while talking to him that someone has scrawled names on the pavement where we're standing. Nathaniel says he did it with a rock. The list includes Babe Ruth, Susan, Nancy, Kevin and Craig.

"Whose names are those?" I ask.

Oh, those people, he says.

"Those were my classmates at Juilliard."