Accessibility links
Series Overview: Electricity In America In a series of stories airing this week on Morning Edition and All Things Considered and published here on NPR.org, we examine the costs, the politics and other challenges of upgrading the country's electricity grid.

Learn about NPR's series on the U.S. electric grid

Learn about NPR's series on the U.S. electric grid

In a series of stories airing this week on Morning Edition and All Things Considered and published here on NPR.org, we examine the costs, the politics and other challenges of upgrading the country's electricity grid. 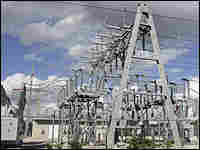 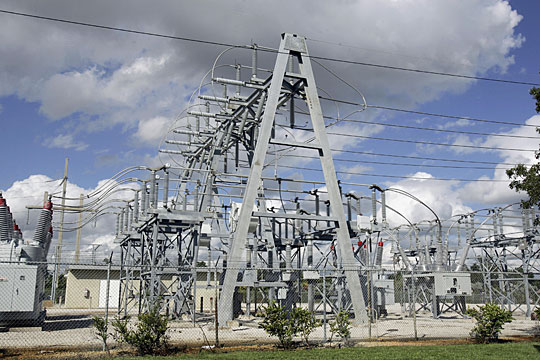 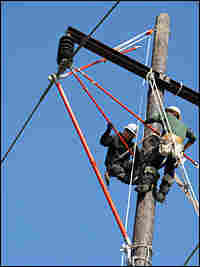 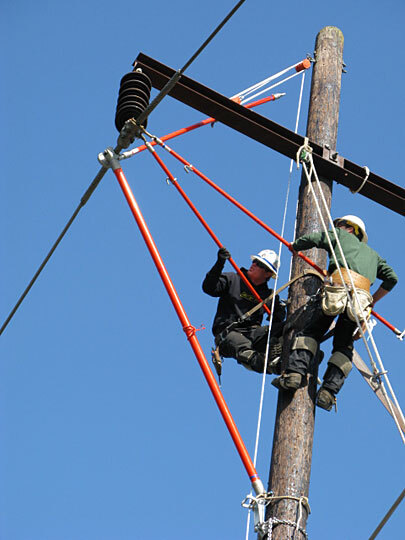 Workers practice repairing high-voltage power lines — part of the new energy infrastructure being built to support an increase in electricity demand in the U.S.

It makes our modern lives possible, but we hardly give it a thought. It's the key to plans for cleaner, greener sources of power, but it is fed by the oldest and dirtiest fuels.

The electricity grid is a marvel of reliability, but, in many ways, it's a throwback to century-old technology. And for a future with more computers and gizmos of every kind — and more power from renewable sources — the grid is going to need some major work.

Seeing a source of jobs and environmental benefits, politicians are embracing the need for an updated power grid. The stimulus bill signed in February includes $11 billion for improvements. But that's just a drop in the bucket. It will take hundreds of billions more (total estimates are impossible to find), years of work, and new technologies to turn the current grid into the smart grid of the future.

Starting Monday, April 27, NPR reporters will more closely examine the costs, the politics and other challenges of upgrading the country's electricity grid.

On Monday, we'll take stock of the grid as it exists now and look ahead to the future. We'll also learn about the challenge of storing power. Most forms of renewable energy are intermittent, so scientists and utilities are hard at work on new ways to store electricity, to capture and save it for when it is needed.

Tuesday, we'll hear about another challenge of updating the grid — it will need thousands of miles of new transmission lines. To get the new grid built, power companies and the government will have to convince a lot of people that power lines aren't a nuisance or a danger. We'll also meet a family in Allentown, Pa., that is living with a new, smart electricity meter. Now able to monitor their power usage, family members have made major changes to their lifestyle to save energy. The meters show the potential uses for smart grid technology, but it may be a while before the real benefits for consumers are realized.

The grid and the environment will be the topic on Wednesday, when we'll ask the question, "Will the new grid be greener?" Getting green power, such as solar and wind, to the grid will take massive new transmission lines, and power companies are hoping the government will help out with the cost. Then there's the potential that an expanded grid will just carry more electricity from traditional dirty sources, like coal.

Our stories on Thursday will focus on the role the power industry is playing in the push for improvements to the grid. Some companies are embracing new technology; others are taking a more cautious approach. But they're all lobbying the government to pay a big share of the cost. And after the money is allocated and the projects are approved, someone's going to have to design and build the new grid and the renewable power plants that feed it. In the Pacific Northwest, some community colleges are seeing a rush of students eager for green energy careers.

Finally, on Friday, we'll get down to business. All the excitement about the smart grid has the makings of a speculative bubble, according to some industry observers. Is green energy headed for a boom, then a bust? And we'll also talk about demand. Just how much power will we need in the future? Some of the projections might surprise you.