Accessibility links
A Toddler, An Open Window And An Amazing Catch Marvin Goldstein was a toddler in 1945 when he fell out of a window five stories up in Brooklyn, N.Y. Fortunately for him, Sal Mauriello was there. Goldstein tells the story of Mauriello's great catch — and their reunion years later — to his son, Eric. 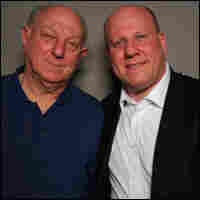 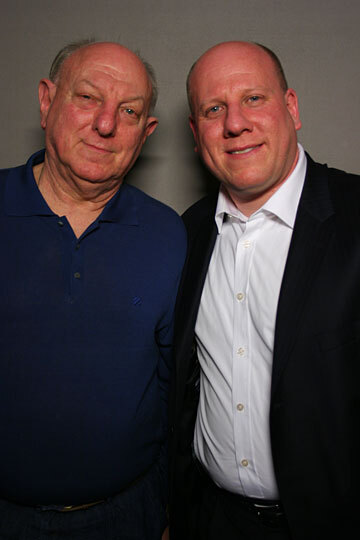 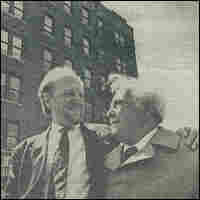 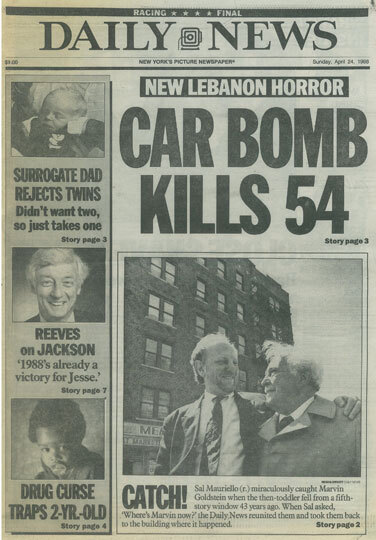 The New York Daily News featured Goldstein and Mauriello's reunion on its front page in 1988.

Marvin Goldstein was a toddler in 1945 when he experienced a catch rivaling any you'd see at a baseball game.

"The windows at that time did not have window guards," Goldstein remembers. "I leaned out, and I had one hand on the window inside and the other hand I was leaning out. [I] let go and fell five stories."

Sal Mauriello, a barber, was coming home early from work that day. He heard a woman scream and saw her point up to the window. Mauriello took off his coat and used it as a net to catch Goldstein in his arms.

"I fractured my nose, but there was no trauma. I became very popular in the neighborhood. My mother's name was Blanche, and I was known as Blanche's Son Who Fell Out of the Window," Goldstein, now 66, tells his son Eric.

Goldstein later learned that every year after his astonishing catch, Mauriello would wonder aloud about what had happened to Goldstein. Mauriello's daughter, a reporter, found Goldstein, and the two men met for a second time in 1988.

"It was absolutely thrilling to see Sal. We hugged, we kissed and it was a glorious reunion," Goldstein says.

On the day of their second meeting, Mauriello and Goldstein returned to the scene in of the catch in the Williamsburg section of Brooklyn, N.Y. Mauriello, who is now deceased, said then that he had kept and put away his coat from that 1945 day, complete with the bloodstains from Goldstein's fractured nose. Mauriello's wife said at the time that it was one of the most important days of his life. And, of course, it was an important day for Goldstein as well.

"He was just so, so happy that we were together again," Goldstein says.