Accessibility links
Army Specialist in Recruitment Ad Killed in Iraq Army Spc. Astor Sunsin-Pineda of Long Beach, Calif., enlisted straight out of high school and was featured in a recruitment ad on Spanish-language TV. He was killed earlier this month by a roadside bomb.

Army Spc. Astor Sunsin-Pineda of Long Beach, Calif., enlisted straight out of high school and was featured in a recruitment ad on Spanish-language TV. He was killed earlier this month by a roadside bomb. 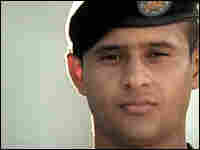 When a man from Long Beach, California, enlisted in the U.S. Army, Army officials were so impressed with him that they featured him in a TV commercial. Now that 20-year-old Army specialist has been killed in Iraq. His Humvee was hit by an improvised explosive device earlier this month.

Mr. JULIO DE PAZ (Stepfather of Astor Sunsin-Pineda): We offered him a job, apartment, a brand new car. And my wife told him just relax for one year. And if you just want the bonus from the Army, we give you the money.

KAHN: Nothing worked. By Astor's last year in high school, Lesby de Paz says her son was begging daily to enlist. Then one day he came up to and said, okay, mom, you win. I won't go.

Ms. LESBY DE PAZ (Mother of Astor Sunsin-Pineda): (Through translator) But are you going to be happy watching me all my life just traded because I couldn't do what I wanted to do. His words just pierced my heart. I looked him straight him in the eyes and I said, son, from this day on, you have my unconditional support.

KAHN: Astor's perseverance not only won over his family, it won him a starring role in an Army recruitment commercial that ran nationwide on Spanish language TV.

KAHN: In the 30-second spot, Astor is seen in his Army fatigues sitting on the family couch between his mom and step dad. Recruiters were impressed with the whole family story.

Mr. DE PAZ: It came from the bottom of our heart because it's a true story, and they liked it very much. They interviewed a lot of people, then she called back in half an hour and said, you guys got the part.

KAHN: The commercial aired for months. It was a quick flash of fame for the modest family who migrated to the U.S. from Central America. Lesby de Paz says her son was always generous with relatives back in Honduras. When Astor was 10, he saved $100 and gave it to his grandfather to buy a horse. Just last month, he wired money from Iraq to a needy cousin. He called and wrote often. And even from Iraq, de Paz says he made sure he sent a special Mother's Day card.

Ms. DE PAZ: (Through translator) Dear Mom, I want to thank you for everything you've done for me and everything you have given me. I am sending you this simple card, but full of love. I'm fine here, but I would have loved to be with you on this very special day.

KAHN: The card arrived just days after the family was told that Astor had been killed.

Ms. DE PAZ: (Through translator) I'm just so proud and thankful to have had these 20 years that I had with him.

Mr. DE PAZ: To me he'll call me Julio, but to other people he would say that's my dad. He was very proud of me. And that's what I hear from other people now, that always called me dad.

KAHN: De Paz was just as proud of his stepson. He says so in the Army recruitment spot, beaming with pride.

KAHN: As the announcer continues, you see Julio de Paz give Astor a giant bear hug. The next shot, a smiling Lesby de Paz affectionately grabs her son and kisses his cheek. Astor Sunsin-Pineda was buried in Long Beach this past weekend. The Army has stopped running the recruitment commercials.