Accessibility links
Critics Decry Naming Of LAPD Building For Ex-Chief Since the 1960s, the LAPD has operated from Parker Center, a building named after William H. Parker. But many now oppose a measure to name LAPD's new headquarters after him, citing incidents of racial insensitivity. 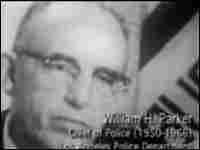 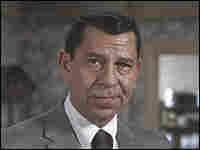 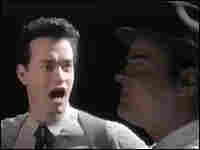 Watch YouTube video from a 1987 movie version of "Dragnet."

The old TV series Dragnet paid homage to the Los Angeles Police Department, headed up by the iconic chief William H. Parker. His LAPD was immortalized by its most famous TV sergeant, Joe Friday.

"You're a cop, a flatfoot, a bull, a dick, John Law, you're the fuzz, the heat. You're poison, you're trouble, you're bad news," Friday famously said in one episode." They call you everything. But never a policeman."

Friday's pokerfaced image personified the real life style of William Parker, who rose through the ranks to become L.A.'s police chief for 16 years.

"The model of 'just the facts, ma'am' and the structure and uniform, that is a carryover from the Parker and how he established LAPD," says ex-Police Chief Bernard Parks, who became an LAPD cop in 1965, the year before Parker died on the job.

Since the 1960s, the LAPD has operated from Parker Center, a downtown building named after the late chief. Parks, now a city council member, made a controversial proposal to put Parker's name on the new $437 million headquarters now under construction. Parks recalls how his former boss initiated a professionalized, even militaristic force, to clean up the city and its police.

"Before he became chief, the city was one of most corrupt cities in the United States," he remembers. "You could become sergeant with several hundred dollars, you could buy that position. You could buy the lieutenant's position. He corrected all that in his era."

Parks says Parker set up an internal affairs division, and integrated black and white officers to patrol the city together.

But many who lived in L.A. in those days remember a darker side of William Parker, a man who was quoted calling black folks "monkeys" and referring to Latinos from the "wild tribes" of Mexico. A new documentary "LAPD: Transforming the Dream" includes footage of Parker talking about L.A.'s African American residents:

"They came in and flooded a community that wasn't prepared to meet them, despite the fact that we got all this relief money going in there," Parker said. "We didn't ask these people to come here."

"William Parker was a racist," says political analyst Earl Ofari Hutchinson, who grew up in L.A. He says the chief's attitudes and policing style helped fuel the Watts riots in 1965.

"When you heard Chief Parker talk, it was almost you heard ropes, crosses, white sheets, a hard-bitten, Jim Crow, plantation mentality," says Hutchinson. "This man had total contempt for the African-American community."

There were similar recollections from residents when the city council debated naming the new headquarters after William Parker.

"He created a philosophy of it's us against them. The us was the police department, the them was the citizenry," recalled one former judge.

"My tios when they used to see a Black and White [police car], used to run and hide behind the house," said a longtime resident.

"They would come in the neighborhood and everyone would scatter," said city council member Herb Wesson. "But it's not like that today."

Wesson, echoed many others who said today's LAPD is far more community-oriented, less abusive than in the old "Dragnet" days. Even the police department's harshest critics praise the current chief, William Bratton, for transforming the LAPD.

"Did you ever see Joe Friday ever put his arm around a victim?" asks Bratton, adding that his officers are much more sympathetic. "Just facts ma'am. The police department of the Parker era, he coined the phrase 'the thin blue line.' It was the idea, leave us alone we'll take care of business and you the public really have nothing to do with how we take care of business. That's certainly not how we look at policing today."

The city council passed the renaming question into committee. So when LAPD's new building opens this summer, it'll simply be called Police Headquarters.