Accessibility links
Connie Converse: A Lost Singer's Music, Finally Found Few people heard Converse's work back when she made it. She was ahead of her time and didn't fit into the 1950s music market, and no commercial recordings were made. 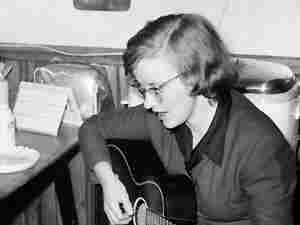 Thirty-five years after singer Connie Converse disappeared, her unusual, tuneful, smart, poignant, personal songs are finally being heard. Converse wrote and sang back in the 1950s, long before "singer-songwriter" was a recognized category or style. But everything we value in singer-songwriters today — personal perspective, insight, originality, empathy, intelligence, wry humor — was abundant in her music.

Few people heard Converse's work back when she made it. She was ahead of her time and didn't fit into the 1950s music market, and no commercial recordings were made. After a decade or so spent living and working in New York, she became discouraged and moved to Ann Arbor, and for the next 12 years edited a scholarly journal on International Conflict Resolution for the University of Michigan. In 1974, she packed her things and drove away, and hasn't been heard from since.

Gene Deitch is a cartoonist, a legend in the world of animation and a music-lover. In the 1950s, Deitch lived in New York and had informal get-togethers at which he'd make use of his newfangled tape recorder to document the music his guests would perform. His tapes of Converse made in 1954 — and her subsequent home recordings — are all that survive of her music. Now, a small label has released an album of her songs, titled How Sad, How Lovely.

In Deitch's old recording, Converse introduces "One by One" as a song she wrote at 3 a.m. It's probably her most poignant piece: With a few vivid images and verses, she depicts what she apparently knew well — the fragility of our connections and our place in the world.