Accessibility links
Ben Folds Goes A Cappella, With Help Pianist Ben Folds has crafted a series of alt-rock hits over the past 15 years. For his pseudo-"greatest-hits" package, he's commissioned new arrangements of those songs from university a cappella groups across the country. Folds and host Jacki Lyden compare and contrast the various versions of his songs.

Note: Some songs contain language that may be offensive to some listeners. 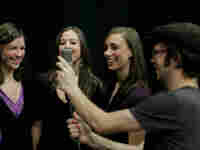 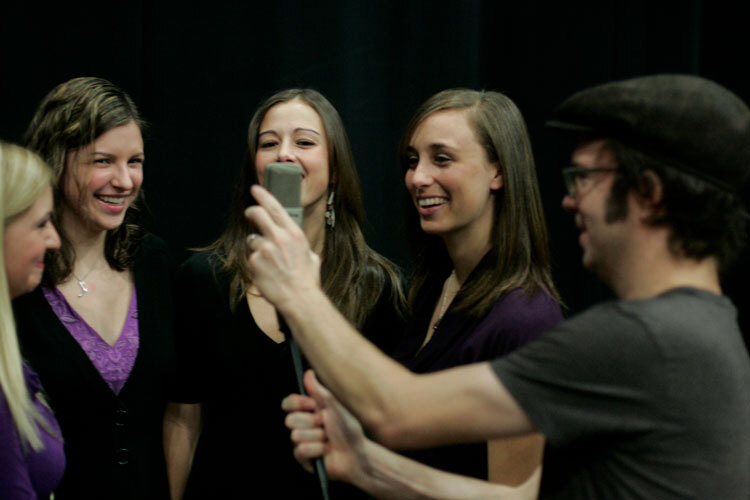 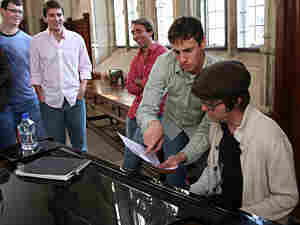 Ben Folds works with the a cappella group The Princeton Nassoons to arrange his song "Time." Jason Harper hide caption 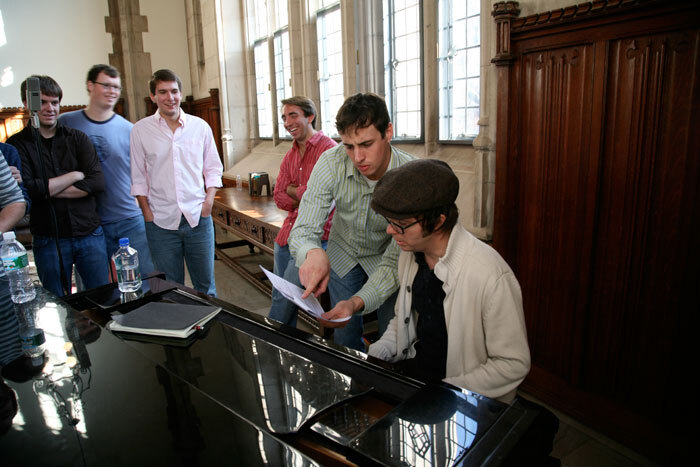 Ben Folds works with the a cappella group The Princeton Nassoons to arrange his song "Time."

Ben Folds first got the country to sing along with his music back in 1997, with his breakthrough hit "Brick." His dynamic live shows often found Folds leaping on top of the piano, dividing the audience down the middle, and conducting them in two-part (and sometimes even three-part) harmony.

Now, he's again harnessing the power of the singalong, but a little bit differently. He's commissioned a cappella arrangements of his music from some of the country's best college vocal troupes and titled it Ben Folds Presents University A Cappella.

Around the time he decided to curate a greatest-hits record, Folds happened upon a YouTube video of an Ohio University a cappella troupe, The Leading Tones, singing "Brick." He recalls watching it, fascinated.

"I intervened and asked them to get their original singer, the one who had been on YouTube, even though he'd graduated. Eventually, we just put the word out to university groups to post similar videos, and got about 250 submissions in just a few weeks."

This discovery has given Folds a newfound respect for a cappella music. He says he wasn't really interested in the genre until he realized that it's "a movement" that requires a sharp understanding of music theory.

"I can play a chord on the guitar or piano that can fall under my hands, but I don't necessarily know what I'm doing," Folds says. "You have to understand voice leading, the chords and theory when you arrange [an a cappella song], and everyone in the group has to understand it. It's cerebral. And it's all live. It's an event, as music should be."

That's the thing about singing a cappella. It's all recorded in a single, unedited performance. Folds himself even takes a stab at singing a cappella for the songs "Boxing" and "Effington." While some may see this as a novelty record, Folds maintains that producing University A Cappella just felt like the right thing to do.

"How often do you get to make a record that's never been made before?" he asks.