Accessibility links
Latin America Poses Challenges To IMF Amid the global downturn, the IMF could face its biggest test in Latin America, where it has a stormy history of development loans and tinkering with economies. Some governments loudly severed ties over the agency's free-market orthodoxy. But some of those countries now need big loans. 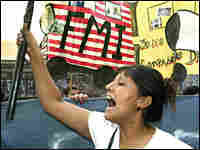 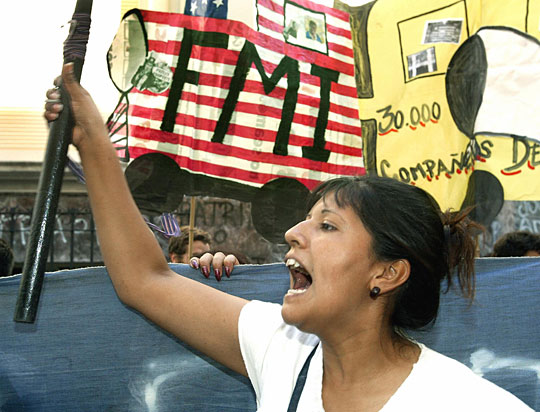 An Argentine woman shouts slogans against the International Monetary Fund in front of Argentina's central bank in Buenos Aires in March 2004.

The chiefs of the International Monetary Fund and World Bank pledged new resources last week to fight the worst global downturn since the Great Depression.

Poised to loan billions of dollars, the IMF could face its biggest test in Latin America, where it has a stormy history of development loans and tinkering with economies.

The multinational lending agency was thoroughly discredited in much of Latin America earlier this decade for pushing its free-market orthodoxy. Some governments loudly severed relations.

But now, amid the worldwide financial crisis, some of those countries need loans — big ones.

The big question is whether countries that fell out with the IMF, such as Bolivia, will go back.

In February 2003, the Bolivian people rose up against President Gonzalo Sanchez de Lozada. Thirty people died in the failed putsch in which Bolivians rebelled against a tax increase levied to reduce the fiscal deficit — an IMF demand made on Bolivia.

"The fund wasn't helpful at all. They had a big role [in] what ended up happening. They were very stringent and adamant [in] asking the government to place a new tax and lower the fiscal deficit," says Javier Comboni, who was Bolivia's finance minister then. He is now a professor at Wheaton College in Illinois.

The IMF and its sister institution, the World Bank, were created at the end of World War II in an effort to support the global economic structure and encourage financial order. The IMF has 185 member countries, but it is largely controlled by its richest members — the U.S., Europe and Japan — and its operations are closely overseen by the U.S. Treasury.

The IMF has its critics worldwide, but nowhere is the fund more scorned than in Latin America.

Many leaders in the region blamed the IMF for making tough demands — cuts in government spending, devalued currencies, privatizations — that they say hurt instead of helped.

How out of favor was the fund? IMF loans to Latin America dropped from $48 billion in 2003 to less than $1 billion last year. Much of the trend can be attributed to a booming export market that fueled Latin American economies.

But a new wave of left-leaning leaders also raged against the IMF. Some, like former Argentine President Nestor Kirchner, paid off IMF loans and promptly severed ties.

Lending Could Grow Threefold This Year

"We are emphasizing, much more than in the past, that the adjustment cannot take place at the expense of weakening the social safety nets," he says.

The IMF says the number of Latin American countries seeking loans could grow threefold this year.

Eyzaguirre says the strategy is to spur spending and improve investor confidence.

"If we are willing to put our money where our mouth is, investors should not fear. The fund could step in, if the countries want, with our money. And it's a wall of money," he says.

Other multilateral lenders are also offering loans. They include small regional organizations like the Andean Development Corp., and bigger ones like the Inter-American Development Bank, which is based in Washington.

Luis Alberto Moreno, president of the Inter-American Development Bank, says loan approvals could rise by more than 60 percent to $18 billion this year.

"We have a very deep reach. We have 26 offices throughout the region. The countries ... love coming to the bank," he says.

But the IMF has vaster resources. So far this year, three Central American countries and Colombia are applying for loans. The IMF also announced that Mexico is receiving $47 billion through its new flexible credit line — an overdraft of sorts that's offered to countries the IMF says have sound economic policies.

In 2007, the government of Ecuador's leftist President Rafael Correa kicked the IMF out of its office in the central bank.

Ecuador, they say, is in need of a loan.