Accessibility links
Hard-Edged Noir Jewel From Denis Johnson The criminals in Denis Johnson's hard-edged Nobody Move aren't cool. But with a Mamet-like ear, Johnson — who won the National Book Award for Tree Of Smoke — wrings poetry from his hapless heroes' deadly exploits. 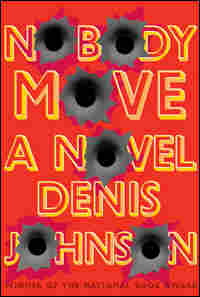 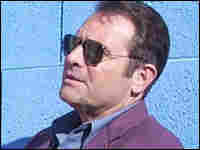 Real gangsters aren't particularly smart or wise. If they were, they'd be hedge fund managers with secret Swiss bank accounts. Mostly, they're dim and desperate and, if clever at all, gifted with the ability to know when a situation might get worse. They don't do long-term planning.

National Book Award winner Denis Johnson's new novel, Nobody Move, gives us authentic goons: eternal fall guys, not cool criminals. They're people who turn to crime because they can't get anything right. With a Mamet-like ear, Johnson makes their deadly, idiotic squabbles sing.

Jimmy Luntz is behind with his gambling debts. When a tough guy shows up and matter-of-factly proposes to begin breaking body parts, Jimmy shoots him in the leg and makes a run for it. Before the day is out, Jimmy ends up in bed with the beautiful but damaged Anita Desilvera, an embezzler of millions who now has nothing to her name. "In a single morning ... she'd made herself a vagrant, a felon and a future divorcee." Instead of leaving town, the two decide to go after the big money Anita left behind — with only their paltry wits and horrendous luck to aid them.

This noirish little shoot'em-up is faster-paced than Johnson's much-celebrated novel Tree of Smoke (2007) or story collection Jesus' Son (1992). It's a rogue sonnet. Yet there's something about this tale of losers on the lam that sticks in the mind. As the book piles on the tough talk and lowlife locales, its tragicomic nobodies begin to look a lot like regular folk, but without the middle-class safety net and with a wee bit more imagination than might be good for them.

In Nobody Move, Jimmy and Anita almost seem sensible for fighting to keep what little they have. As she gushes about choosing him for her lover (and partner in crime), he quips, "I just think it's bullshit for you to act like you had a choice."

One could be melodramatic and say that at least they have each other, but that fact is unlikely to save them. Johnson's triumph is that he makes poetry out of these two emphatically unpoetic lives.

This excerpt contains language some readers might find offensive.

Jimmy Luntz woke at the Log Inn Motel and spent twenty minutes sitting upright in his bed, smoking a Camel and staring at the woman asleep beside him. Just watching her breathe. Very gently he lifted the covers. She was dark-skinned all the way down. "Oh, that's right," he said, "you're an Indian."

He carried his shaving kit into the bathroom. Before he emptied his bladder he fished the woman's cell phone out of the toilet and set it on top of the tank. Anita. She hadn't told him her last name.

He took his time shaving, grooming, getting good. He couldn't remember the last time he'd awakened beside an unfamiliar woman. As for one this good-looking-- never.

He came out naked and found her wide awake, sitting on the bed's edge. Also naked. Holding a revolver in one hand.

With the other hand she held up a credit card. "What's this?"

"You said your name was Franklin."

She spun the credit card from her fingers, and it sailed across the room. "Then what is your name, if you don't mind my asking, since we recently fucked, and all."

"Gambol is a great big asshole."

"As big an asshole as you?"

"In my opinion, the asshole is the one who steals the wallet."

"I'm talking about this other gun."

"The one I shot Gambol with."

She closed her knees together and took hold of the blanket and pulled it over her crotch. "Now it's pointing at you."

"That's what I thought yesterday. I saw you at the Feather River, remember? I thought, Hey, that guy has a gun. Then-- sploosh. No more gun."

She aimed her weapon at him a long time without speaking. She stood up. Luntz stepped backward until his shoulders collided with the wall.

With her purse in one hand and her gun in the other she headed for the can and shut the door behind her. The lock clicked. Luntz heard the shower start. He let the air out of his lungs.

He lit up and burned through half a Camel, inhaling smoke with every breath.

With the cigarette clamped in his lips he went on his hands and knees and pulled Gambol's white duffel bag from under the bed and opened it. He found his last clean set of socks and underwear. He didn't touch Gambol's shotgun.

He got on his socks and shorts and opened his door and tossed the last burning inch of his cigarette into the parking lot and observed a county squad car pulling up to the motel's office. A green Caprice, mid-nineties.

Luntz sat on the bed and wrapped himself in his own arms and closed his eyes and sat there shaking his head.

As soon as the knocking came he started for the door, but three feet short of it he stopped. He cleared his throat and said, "Who is it?"

Luntz put his hand on the doorknob and bowed his head and waited for a thought that didn't arrive. Four more knocks. He opened the door and said, "Good morning!" to a young guy in uniform.

"Good morning. Mr. Franklin, right? How are you?"

"That's good. Do you know anything about a Cadillac parked over there at the airstrip?"

"There's a Cadillac Brougham parked over there, and Mr. Nabilah tells me you checked in without a car."

"The manager. He thought it might be your Caddy over there."

"And it looks like blood on the left rear tire, lotta blood. Did you maybe hit a dog?"

"There's a hole in the left rear quarter panel. Looks like a bullet hole."

At that moment Anita came out of the bathroom wrapped in a towel, her black hair slicked back, and flashed a smile that would have blown the doors off Jesus Christ.

"Oh, right," the deputy said, "that's your Camaro out there. I mean, it looked like it. I mean-- yeah. That's your car." He turned to look at her car, which was parked sideways across three spaces behind him.

"All mine. Is there a problem?"

"No problem. I was just checking about this Caddy out there at the airstrip. If nobody claims it, I'll have to get it towed."

"Okay, that clears things up a little. Thanks."

"Are you going to watch?"

Luntz said, "You too," and shut the door in his face and sat down on the bed.

Anita dropped her towel and stepped into her skirt. Luntz stared at her breasts.

She got her bra fastened. "That was Deputy Rabbit."

"You actually have a carry permit or something?"

"I did. But it's revoked." She found her blouse on the floor. "Deputy Rabbit was talking about your Caddy."

"It was your Caddy when I saw you throw that gun in the Feather River."

"I just borrowed it."

"What did you say your name was?"

"Can I borrow the Cadillac, Jimmy?"

"What's wrong with that Camaro of yours?"

"Too many people know it."

"The door's unlocked," he said. "I put the keys under the floor mat. But I wouldn't advise driving around in that thing."

"Not legally, I guess. Gambol doesn't deal with the police."

"Gambol? I thought you shot him."

"Is he running around looking for it?"

"Probably not. Not yet. If he is, he's running around on one leg."

Luntz stared while she sat on the bed and stuck her toes into the legs of her pantyhose and stood up straight and hiked her skirt and wiggled her underwear all the way on. She dropped the hem and smoothed her skirt. One at a time she kicked her black pumps into position on the floor and worked her feet into them. She got her coat on and opened the door.

"What was your name again?"

"Jimmy Luntz. I had a good time last night."

"I get that. Yeah. But maybe we could have coffee or something."

Leaving the front door ajar, she went into the john and came back and handed him her cell phone. "Hang on to this phone. If it still works, maybe I'll call you."

She gave him a little salute and walked out, and he sat there holding her phone in his hand for ten minutes.

Then he set the cell phone aside, clapped his hands together twice, and stood up. He got dressed and got his gear together. He had no jacket other than his white tuxedo. He put it on and pocketed the cell phone. He picked up Gambol's duffel by the handle and looked around for anything he might have forgotten. A knock came at the door.

He opened it quickly. It wasn't Anita.

Two very clean-cut men stood side by side in the doorway, one of them holding up a badge. "We're with the Federal Bureau of Investigation." 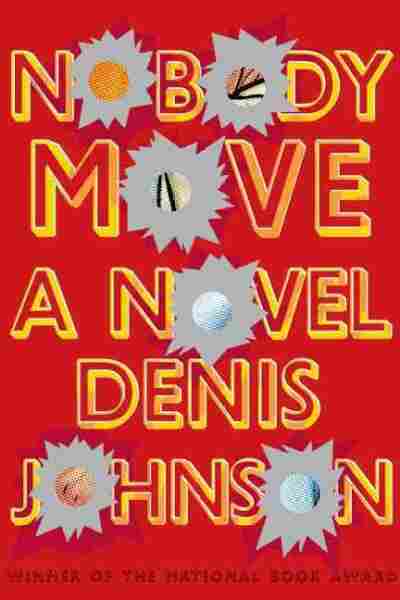