Accessibility links
Foreclosures Hit Hard in Minneapolis Neighborhood A high concentration of foreclosures has created problems for businesses and homeowners in a Minneapolis neighborhood. Observers say similar difficulties could be in store for other communities, partly as a result of subprime lending abuses. 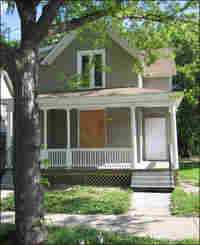 Boarded-up homes like this one dot the neighborhoods of north Minneapolis, where foreclosures skyrocketed in the last two years. Scott Horsley, NPR hide caption 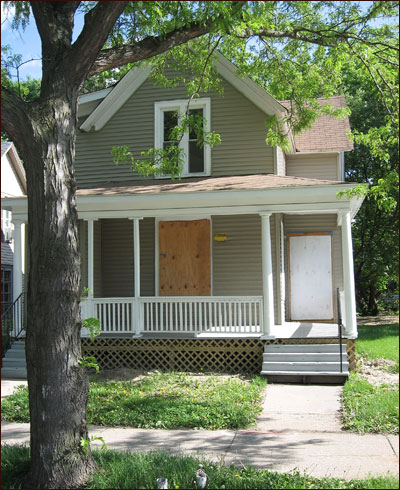 Boarded-up homes like this one dot the neighborhoods of north Minneapolis, where foreclosures skyrocketed in the last two years. 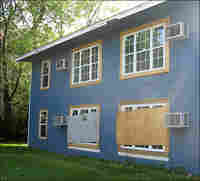 Windows are boarded up on this home and others throughout north Minneapolis. Homeowners and businesses are struggling with the area's high concentration of foreclosures. Scott Horsley, NPR hide caption 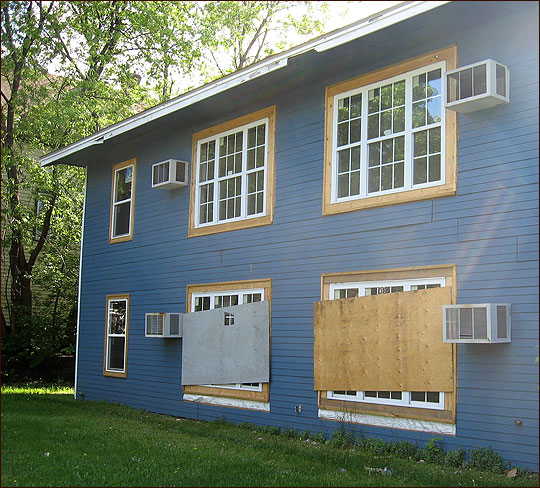 Windows are boarded up on this home and others throughout north Minneapolis. Homeowners and businesses are struggling with the area's high concentration of foreclosures.

See a map from the City of Minneapolis Department of Community Planning and Economic Development showing foreclosures in 2006.

Federal Reserve Chairman Ben Bernanke says problems with subprime mortgages should have only a limited effect on the broader housing market. But he warns the fallout could be more severe in neighborhoods with a high concentration of foreclosures.

North Minneapolis is one such area: a working-class neighborhood where efforts at revitalization have been hampered by the growing number of abandoned houses and "For Sale" signs.

A map of foreclosures in the city shows a dense cluster of orange dots in neighborhoods just north of downtown. Ruth Hayes's home almost became one of those dots, after she and her husband Gene unwittingly refinanced into a risky, adjustable rate loan. Their monthly payments began ratcheting up last summer, overwhelming Gene's salary as a city bus driver.

"It was scary. We did a lot of praying," Ruth says.

The Hayeses won a reprieve with the help of ACORN, a non-profit agency. But many of their neighbors were not so lucky. Foreclosures in Minnapolis soared nearly 80 percent last year, and those foreclosures are concentrated on the city's north side.

"When you get those concentrations of foreclosed properties, it moves from being an individual tragedy to a challenge for the entire community," says state Rep. Jim Davnie.

The neighborhood had been one where working-class homeowners were building wealth. Home prices along the leafy, tree-lined streets near downtown had climbed in the last decade to as much as $180,000. Now, vacant and foreclosed houses are being offered for $60,000 or less.

"The longer you're here, the more you're seeing boarded-up houses and your neighbors moving away," says Kim Vaye, who's been trying to sell the three-bedroom home she owns with her husband since October. They've already dropped the price by $10,000. But during two open houses, only two people showed up to look.

"It's hard to sell a house at full price when you have all these houses that the banks own or that people are trying to get rid of at super-low prices. So you're kind of competing against that, which is really unfortunate," Vaye says.

Area businesses are suffering from the exodus as well. Just three years ago, the opening of the Cub Supermarket was a major boon for the Broadway business corridor. The sparkling aisles are stocked with food. But on a recent day, only three of the 14 checkout stands were open.

Store director Ed Anderson is thinking of cutting back on his in-store bakery staff because there aren't enough customers to buy the fresh-baked goods.

"The barbershop needs so many heads to cut. The grocery store needs so many customers. All the various businesses up and down Broadway feel this immensely," Anderson says.

The wave of foreclosures has not been triggered by massive layoffs. Unemployment in Minneapolis is actually lower than it was two years ago. Even on the north side, the city has been making public improvements, building pocket parks and adding a bike path. The neighborhood was making progress, but the foreclosures are a big setback.

"We also have what we call the plumbing thieves, the copper thieves, they come in and strip the houses of copper," says Sherrie Pugh Sullivan, executive director of the Northside Residents Redevelopment Council. "We've had some houses that have exploded because the gas was left pouring out into the house. So we feel like we're dangerously tipping back."

Some northsiders are still trying to improve the neighborhood. At the Bean Scene coffee shop, residents of Sheridan Avenue gather to plan a neighborhood trash pickup and block party. They also take time to discuss the foreclosures.

Rebecca Stack says she was struck by the problem while walking home from choir practice.

"I came back a different direction on another block. And both sides — there must have been five homes on one side and six on the other. One city block and they were all for sale," Stack says.

Even for a neighborhood sparkplug like she is, the foreclosures take a psychological toll.

"I pick up trash, and my specialty is glass," Stack says. "And there was a point in time not long ago when I stopped doing it. I thought about it. But I didn't do it. And I realized I was no longer engaged with the neighborhood. I had given up. On a certain level, I had given up. And I think the foreclosures that day on either side of the block, it just was like, why bother. Because I can't fix this. I cannot make this better."

Stack is not completely discouraged. She organized the coffee shop get-together in an effort to reconnect with her community. Still, observers say without more help for borrowers, foreclosures are likely to keep climbing. While north Minneapolis has been especially hard-hit, other communities will feel the pain as well.