Accessibility links
Anne-Sophie Mutter's Journey to Mozart Violinist Anne-Sophie Mutter has been making her way through all of Mozart's major violin works. She stopped by the studio, with her longtime pianist and collaborator Lambert Orkis, to play selections from Mozart's Violin Sonatas. 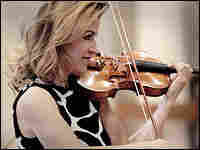 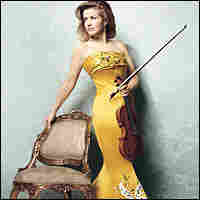 Anne-Sophie Mutter has rededicated herself to the music of Mozart. Deutsche Grammophon hide caption

Classical Sessions, a new feature, presents some of today's most exciting musicians in conversation as they perform in the studio with public radio hosts from around the country.

There's nothing quite like seeing and hearing a masterful violinist and pianist engaged in musical conversation right in front of you in a studio. Add to that the opportunity to talk with them about the music and their careers, and you've got a radio host's dream come true.

That was the case when violinist Anne-Sophie Mutter and pianist Lambert Orkis came by our studios to play Mozart. The two have been making music together for nearly 20 years and their long-standing musical relationship shows.

Anne-Sophie and Lambert are so steeped in the music, when they talk about Mozart, they tend to finish one another's sentences. That makes for some very exciting performances.

Sitting beside these two great musicians, while they played Mozart with such intensity and freedom, made me think that somehow, somewhere Wolfgang Amadeus himself was smiling.

Violinist Anne-Sophie Mutter has played baroque standards, thorny contemporary works and grand romantic concertos. But from the very beginning of her career, through to this day, Mozart's music has held a special place for her. "Mozart's music is like an x-ray of the soul," she says, "it shows what is there, and what isn't."

When Anne-Sophie was just six years old she remembers a sound that made a huge impression on her--an old scratchy recording of Mozart played by the legendary pianist Clara Haskil.

At age nine, she made her debut playing Mozart's Second Violin Concerto. She played Mozart again, at age 13, at her breakthrough concert at the Salzburg Festival with conductor Herbert Von Karajan.

Lately, Mutter has returned to Mozart. She's been rediscovering all of the composer's major works for the violin. With Lambert Orkis, Mutter has been on tour playing Mozart's Violin Sonatas. The two stopped by the Performance Today studio to play selections from some of their favorite sonatas.

American Public Media, based in St. Paul, Minnesota, presents a diverse array of musical offerings, from pop and folk to award-winning classical music programs such as 'Performance Today' and 'Pipedreams.'