Accessibility links
Home Butchering Class Goes From Pig To Parts Pork lovers may be pining for their porcine fix as the economy puts the squeeze on everyone's wallets. But for the hard-core foodie, a DIY attitude can help bring home more bacon. A butcher in New York is teaching students how to trim some fat from their budgets. 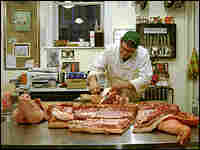 Butcher Tom Mylan's secrets to butchering at home include a cheap, flexible carving knife and the right tunes on the iPod. Zach Brooks/MidtownLunch.com hide caption 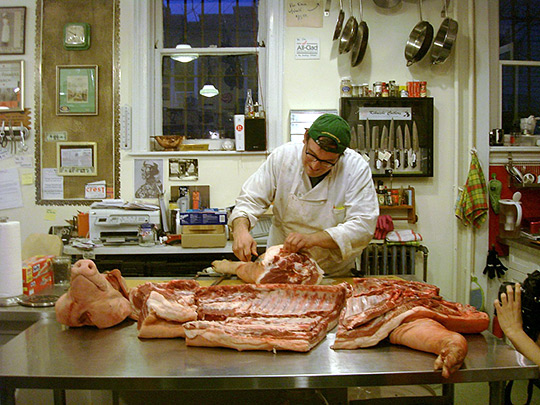 Butcher Tom Mylan's secrets to butchering at home include a cheap, flexible carving knife and the right tunes on the iPod.

I always had a simple culinary dream: to host a reunion in my belly for all the parts of the pig. What butchers have put asunder, I want to put in my mouth. Bacon. Snout. It doesn't matter. The stomach is willing, but unfortunately, my supermarket is weak.

Most stores make do with a small selection of swine in plastic foam rectangles. Ribs. Chops. Butt. No problem. But for something more exotic, you have to go to the source: the whole pig.

That's why I and a dozen other obsessive foodies made the trek to the Brooklyn Kitchen to learn to be our own butchers. The tiny shop in the Brooklyn, N.Y., neighborhood of Williamsburg barely seems big enough to fit an entire pig, but that's the point of the monthly classes. If we're going to learn how to saw off a trotter in our apartment kitchens, then we have to learn to make do in small spaces.

Legendary neighborhood butcher Tom Mylan is our porcine guide. He's the lead meat cutter at Marlow and Daughters, a few blocks away from the store, and the supplier of exotic cuts to trendy Brooklyn restaurants like Dressler. At the beginning of the class, he shows off his two secrets to butchering at home: a cheap, flexible carving knife, and the right tunes on the iPod.

The first task of the home butcher is getting the 100-pound pig from the street to your kitchen. Mylan prefers the firefighter carry, with the hooves draped over his shoulders. He drops the $350 carcass on the counter like a ton of pork.

The students lean in to look Porky in the eye. Just one eye, since the poor thing has already been split in half. There's not a squeamish vegetarian in the bunch. They take notes and ask about the breed and the background. Matthew Crosby isn't sure he wants to try this at home, but that isn't the point.

"People see meat as something wrapped in plastic in an aisle of the supermarket. They've completely lost touch with where meat comes from," Crosby says. "I'm not sure I'll ever put these skills into practice, but it still seems like something worth knowing."

Mylan begins by opening up the pig. I've spent my life staring down at beautiful hunks of pork, but I can't recognize a single store-bought cut in that red interior.

"This is just a blank canvas," Mylan says. "Every culture cuts up their pigs differently. An American pork chart has five dotted lines, and that's it. And you look at a French chart, and it's like a map of the Balkans."

Mylan says that on this night, we're going to do it his way. And the cutting and sawing begins. There's almost no blood, but there is sweat and tears. Mylan is breathing heavily and perspiring as he separates out the chops and the pork belly. The food lovers cry with hunger.

"It's tough physical work," Mylan says. "But I'm mostly sweating because it's nerve-wracking to be cutting and talking at the same time, and hopefully not cut yourself."

Then he shows off his scars. The place where he plunged the knife into his forearm. The shavings off his fingers. He doesn't lecture the students on home safety, but he does show off the medieval looking chain mail he wears under his shirt. Lesson accomplished.

It takes about two hours to reduce the pig into a pile of cuts that wouldn't look out of place on your dinner table. The students ooh and aah at the biggest slice of bacon you've ever seen. But a few pieces are puzzling. Mylan helpfully offers recipes for the cheeks, the kidneys and the diaphragm.

Then he lets the students choose which parts of the pig they want to take home. No wonder the class sells out every month. The hardcore foodies take the head and ham. Some just want all the Flintstone-looking pork chops they can grab.

In the back, two sisters are reviewing their notes. Kirsten and Julia Moberg are actually going to try this at home. The only challenge?

"Our kitchen is also our living room and dining room and office. But it's also going to be a butchery soon." Kirsten says. "What I need is a bigger freezer."

By the time I get back to the counter, there's only one part left for the poor public radio reporter. The tail.

"You're lucky." Mylan says, "I recommend scoring the skin very slightly with a knife, rubbing some salt and pepper into it, and then roasting it in an oven at about 350 until it gets golden brown and crispy. Then pull it out of the oven and just start gnawing away at it."

I go home with the meat lollipop. It's still in its little baggie at the bottom of my fridge. I can't quite bring myself to chew on something that still has wiry hairs on it. The pork reunion will wait. But the dream never dies.

A Recipe For Head Cheese

Take the whole pig head and give it good shave. A disposable razor works fine. Take out the eyes. Place the head into a brine solution. (Try a cup of salt and a half-cup of sugar per gallon of water. You can also add bay leaves, garlic, pickling spice — whatever you like.) Keep the pig head submerged in the brine for a few days.

Rinse off the head and put it in a large pot of water. Bring to a boil for 5 minutes until the scum rises to the top. Dump off the water. Fill it back up with cold water and add some onions, celery, carrots and any other seasoning you'd like. If you have a pig hoof, you can throw it in to add to the gelatin. Cook at a bare simmer for 8 hours.

Take out the meat and bones. Strain the liquid, picking out all the meat. Don't forget to save the tongue. Bring the strained broth to a boil and reduce by half. Add white wine and a squeeze of lemon to the stock to brighten it up. Meanwhile, chop up the meat and leave the tongue whole. Thinly slice a few stalks of celery to add some crunch.

In a mold, place the tongue and the chopped meat and celery around it. Cover with stock, and put in the fridge. It will firm up, and you can slice it.