Accessibility links
Webb's Prison Crusade The Virginia senator's willingness to take up this cause is evidence that the culture gap may be closing. Partner content from The Nation. 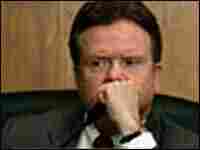 The Virginia senator's willingness to take up this cause is evidence that the culture gap may be closing. Courtesy of The Nation hide caption

toggle caption
Courtesy of The Nation

After more than a year of hearings before the Joint Economic Committee, in March Virginia Senator Jim Webb introduced the National Criminal Justice Commission Act of 2009. The legislation would create a blue-ribbon panel with the mandate to make recommendations for wholesale reform of criminal justice policy.

There's dramatic symmetry to Webb's taking on this issue. A proud member of the white working class, raised a Democrat, he sided with the right during the culture wars only to return to the Democratic Party in response to the kleptocratic neoconservative incarnation of the modern GOP. If his election in Virginia signaled that conservative backlash politics had reached a point of diminishing returns, his crusade against the prison-industrial complex can't help but make me feel optimistic that the culture wars may finally be drawing to a close.

Webb's biography makes him the perfect vessel for this endeavor; it also helps that he's so indifferent to the rudiments of electoral politics. In fact, it's a kind of miracle the man is a senator at all. On a recent afternoon, as he toured the Bragg Hill Family Life Center, which provides social services to ex-offenders in Fredericksburg, Virginia, he was so stone silent that co-founder Rev. Joseph Henderson grew self-conscious. "You can ask any questions," Henderson offered nervously. "We preachers talk too much sometimes." As we walked through the gym, Webb had to be prompted to shake the hands of the (adorable) children scurrying around him, and the look on his face as he prepared to glad-hand was that of a man steeling himself for the dentist's chair.

But once we were inside the presentation room, where about a dozen people who work in corrections and social services had assembled to talk about the criminal justice system, Webb's evident passion and fluency with the issues created a palpable bond with the attendees. "We have 5 percent of the world's population and 25 percent of the people in prison," he said. "Either we're the most evil people on earth, or we're doing something wrong." As for the imprisonment of nonviolent drug offenders: "I saw more drug use at Georgetown University Law Center when I was a student there than I've seen anywhere else in my life," he said, to knowing laughs. "And some of those people are judges."

Webb then listened as attendees enumerated the various dysfunctions, injustices and perverse incentives created by the metastasizing prison-industrial complex: "I can get $600,000 from the state for a new jail," said Fredericksburg Mayor Tom Tomzak, "but I can't get $40 for Healthy Families."

There are some hard policy questions in Washington, but whether we should have more, or fewer, people in prison is not one of them. The question is whether politicians remain paralyzed by fear of culture war demagogy. The mere fact that Webb is calling for a commission, a classic Washington way of outsourcing explosive issues like intelligence reform or closing military bases, suggests that members of Congress remain wary.

On the other hand, the right-wing, tough-on-crime backlash that started in the wake of the Watts riots in 1966 corresponded to a dramatic rise in the crime rate in the United States: violent crime more than tripled between 1960 and 1980. This doesn't mean the politics of crime were just about crime--the issue stoked racial solidarity among white voters--but it does mean that crime and the political reaction to it are related, and that the drop in the crime rate in the past decade (down almost 14 percent) should make reform more possible.

So far Webb has gotten nineteen co-sponsors, including Southern Democrats like Mary Landrieu and Kay Hagan and Republican Lindsey Graham. Most promising, he has enlisted the support of Arlen Specter. Facing a primary challenge from his right, Specter is as attuned to the risk of provoking a conservative backlash as any politician in the country. If he thinks he can get away with it, it's a good sign.

Politics is a path-dependent business: most elected officials simply imitate the actions and language of those who came before them. Occasionally, an innovator comes along who senses that the old rules no longer apply. If he's successful, others follow. That's how the culture wars started, with men like Richard Nixon and Ronald Reagan, who understood there were new resentments and frustrations to tap that weren't available to an older generation of conservatives. "People follow leaders," Webb told me, "if leaders give them something to believe in."