Accessibility links
Tips For Preventing Swine Flu To steer clear of swine flu, the CDC recommends old-fashioned medicine: Wash your hands, cough into tissues — and get plenty of rest! 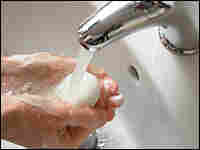 Washing your hands frequently remains some of the best preventive medicine. hide caption

As it investigates recent incidents of swine influenza in humans, the U.S. Centers for Disease Control and Prevention is stressing prevention.

The agency has posted several Web pages dealing with swine flu, including a list of what you can do to forestall this — or any — infectious disease.

• Avoid contact with people if you, or they, are sick.

• Stay at home — from work, school or other public activities — when you are ill.

• Shield others from your coughs and sneezes by using a tissue.

• Keep your hands away from your eyes, nose or mouth.

Currently, there's no vaccine for humans that prevents swine flu, though scientists are working on one. But there is a vaccine for some forms of swine flu in pigs.

Which suggests one more precaution particular to this outbreak: Avoid unnecessary contact with live pigs. (It's safe to eat pork, but not pet a pig.) But that alone may not roadblock the spread of swine flu this time around. In pigs, this virus causes a respiratory illness that's highly contagious, but usually not fatal.

As seen with bird flu, people coming into contact with infected animals occasionally become sick themselves — but the virus usually stops there. Rarely have humans infected other humans with bird flu — or swine flu. With the current swine flu outbreak, the swine flu virus has transformed, appearing to increase its ability to spread between humans.

"We've seen swine influenza in humans over the past several years, and in most cases, it's come from direct pig contact. This seems to be different," Arnold Monto, a flu researcher with the University of Michigan, told the Associated Press. "I think we need to be careful and not apprehensive, but certainly paying attention to new developments as they proceed."

At this point, the CDC and other government organizations are focusing on getting the message out to individuals about how to respond to the threat of influenza. Public health officials are monitoring the various cases and conducting epidemiological research on the virus.

"If the outbreak turns into a full blown epidemic," says Andrew Pekosz, an associate professor at the Bloomberg School of Health at Johns Hopkins University, "the government will have the right to place limitations on travel and gatherings of groups of individuals." Schools may be closed or sporting events canceled, Pekosz says, and officials will implement quarantine procedures for hotspots of cases and begin distribution of antiviral drugs.

All these steps, Pekosz says, are necessary "to limit the epidemic and slow virus spread."

Jeanne Matthews, an assistant professor at the Georgetown University School of Nursing and Health Studies, says health officials are "so dependent on whether it appears that community containment might halt person to person contact. This is a new strain. I don't think we know enough about this flu to have a sense of when that should be."