Accessibility links
A Green Challenge: Make Renewables Reliable Bringing renewable energies like wind and solar power onto the electric grid is the first step toward making the grid both green and smart, but engineers and power companies must also find solutions to the challenges of renewable energies, which don't produce consistent, reliable power.

The second of a 10-part series

In a series of ten stories airing this week on Morning Edition and All Things Considered and published here on NPR.org, we examine the costs, the politics and other challenges of upgrading the country's electricity grid. 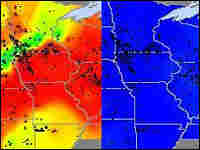 These images represent the available electricity that could be generated from wind power on the windiest day in 2004, April 29 (left), and on the least windy day that same year, Aug. 13. Darker red indicates stronger wind, while blue represents no wind. Electric Power Research Institute/DPE Eastern Wind Integration and Transmission Study hide caption

These images represent the available electricity that could be generated from wind power on the windiest day in 2004, April 29 (left), and on the least windy day that same year, Aug. 13. Darker red indicates stronger wind, while blue represents no wind. 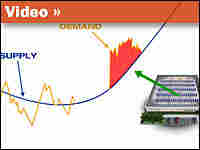 The Obama administration wants to rebuild the national electric grid that delivers power to everyone's toasters and televisions. One reason is that the grid can't handle all the new solar and wind power the president wants to build to create a greener energy economy.

Here's the problem: Solar and wind power are intermittent. Sometimes it's sunny, sometimes it's not, and it's the same for wind. But the grid needs constant and reliable sources of power.

What's the answer? One solution, says Imre Gyuk, a researcher at the Department of Energy, is to store that energy. Gyuk and engineers at power companies have an idea for how to do that.

"You put a large number of small batteries around a neighborhood," Gyuk says, "just like the neighborhood transformers — just a little green box that's innocuous."

By small, he means about the size of the battery in a hybrid car, and it would be hooked up to the grid. In fact, DOE and American Electric Power, a large utility, plan to use batteries made for hybrid plug-in vehicles to create such a constellation of storage sites. The batteries are charged when there's surplus power — say, on an especially windy day —and then tapped on a cloudy or windless day.

"If you have these storage units sitting throughout the community, then you can simply withdraw half an hour's worth of storage to make up for the wind," Gyuk says.

The Department of Energy is plowing more than $600 million from the government's stimulus package into storage technologies. Another possible solution is something called a "flywheel" — a spinning metal rotor, floating in a vacuum inside a steel cylinder.

Gene Hunt, communications director at Beacon Power in Massachusetts, says one of the company's flywheels spins at 16,000 revolutions per minute.

"It's the same principle as that of a potter's wheel," he says. "The potter's wheel is powered by the human foot, pumping the pedal up and down. It turns this wheel which has a certain weight, it brings it up to a speed, and when you take your foot away, it continues to spin. It's using the energy that's stored in there."

A small amount of electricity is needed to keep the flywheels spinning, and the machines store that power as rotational energy. Beacon is building flywheel "farms" that can return that energy as electricity in short bursts when operators need to meet a spike in demand on the grid.

There are other ways to store electricity for the grid: Water can be pumped up into an elevated reservoir when electricity demand is low (and electricity production is in excess); then it can be released to flow through turbine generators to make more electricity when demand is high.

But all these devices need software to keep them linked to the grid. That's something a company called GridPoint does. Karl Lewis, the company's chief strategy officer, says the idea is to allow utilities to draw on electricity in household storage devices when customers don't need it, much like a virtual power plant.

That "shared" power could extend to electric cars. As the car wanders around the grid, Lewis says, "we know where the car is, where it's plugged in, how much energy it needs. And what happens is that the car becomes a smart charging asset available both to the consumer and the utility."

Lewis acknowledges that some people may not want the utility to know where they are all the time. He says people would have the choice to participate in a program like this. But, he adds, hooking up to the new grid as an energy partner may ultimately mean cheaper utility bills, and more wind and solar electrons running Americans' appliances or cars.