Accessibility links
Building Power Lines Creates A Web Of Problems To create a new energy economy with much more solar and wind energy, thousands of miles of new transmission lines must be built across the nation. But finding suitable locations to place the lines is incredibly complicated without a federal body to oversee planning.

The third of a 10-part series 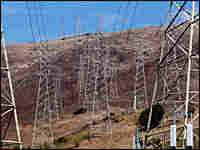 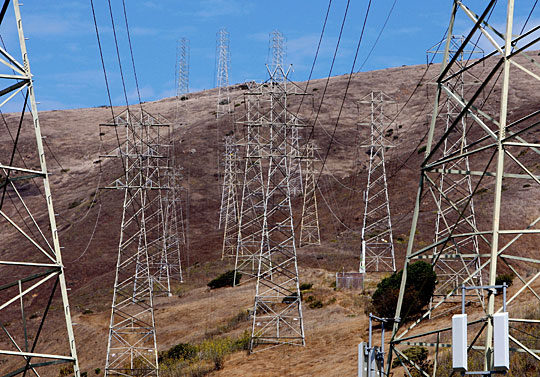 In a series of 10 stories airing this week on Morning Edition and All Things Considered and published here on NPR.org, we examine the costs, the politics and other challenges of upgrading the country's electricity grid.

To create a new energy economy using much more solar and wind power, the Obama administration needs to build thousands of miles of new transmission lines. Despite the promise that these are needed to get more green energy from solar and wind generators, the proposal faces a host of obstacles.

Chris Miller, president of the Piedmont Environmental Council and an advocate of renewable energy, points out that new transmission lines may not be dedicated just to "green" electrons.

"There is a real potential that what you are expanding is the capacity to move coal-fired electrons," says Miller, "and that the cheapest power supplies, which are the dirtiest plants, will have access to markets they didn't use to."

And here's something else to consider: Does everyone really want renewable energy brought in from distant producers over power lines subsidized by the federal government?

Maybe not, says Ian Bowles, the energy secretary for Massachusetts. Bowles says that might undercut homegrown wind projects in New England. "When you decide upfront [that] transmission is the problem, you've put your hand on the scale and said, 'We want to help out particularly those remote sources of wind and green electricity.' "

The man picked by President Obama to resolve these questions is Jon Wellinghoff, the new chairman at the Federal Energy Regulatory Commission.

"I think everybody has to play ball," Wellinghoff says. "I think that we have to realize that we're all in this together, and that nationally, we do have a huge problem."

Wellinghoff says local and state politics can be daunting. "You have to do siting. Where are they going to go? And that's where you get very contentious," he says. "In whose backyard are you going to run the line?"

For a power line to cross 10 states, each of those states must approve that siting.

Wellinghoff hopes he'll soon have the authority to overrule states if they balk. FERC had that power until recently when a federal court took it away, and now the Senate Energy Committee is writing a bill that would give it back to FERC. The bill has strong support from members of Congress who want to see a new grid built quickly.

Energy Secretary Steven Chu says that no matter how much authority it has, the Energy Department shouldn't play the bully by simply declaring eminent domain when it wants to build a new line. He says states and citizens have to be partners, and enjoy some of the benefits.

"If you just go in and say, 'I'm going to pass a law that has a huge stick,' " Chu says, "what will invariably happen is that you end up in lawsuits."

Among these uncertainties, one thing is sure — making the grid smarter and greener will cost a huge amount of money. Chu says that could be well over $100 billion over several decades.

"If you accept that there's a national objective here, just as we did with the national highway system, then you create the national authority to expedite that at the federal level," Detchon says.

Eventually, that national authority will have to decide who's going to pay for the new grid.