Accessibility links
Mexico Grapples With Deadly Swine Flu Outbreak Mexico's borders will remain open, but schools, museums and libraries will be closed in the face of a deadly flu outbreak that's suspected of killing as many as 149 people.

Jason Beaubien Reports From Mexico On All Things Considered

Jason Beaubien Reports From Mexico On All Things Considered 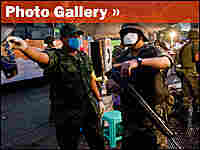 Officials said the death toll from suspected cases of swine flu in Mexico jumped sharply on Monday, and so did public fears as the effects of the epidemic touched almost every aspect of life.

Mexico closed schools nationwide for 33 million students — from kindergarteners to college students — until May 6. Mexico City Mayor Marcelo Ebrard says he is considering suspending all economic activity in the capital until the swine flu outbreak is under control.

Mexican Health Secretary Jose Angel Cordova said midday Monday that 149 people had died from pneumonia-like symptoms since April 13, though only 20 have been confirmed as being caused by swine flu. The government is awaiting test results on the other cases. Nearly 2,000 people have been hospitalized with serious cases of pneumonia since mid-April, and about half have been released, Cordova said.

He sought to reassure Mexicans that the country is working with the World Health Organization and the U.S. Centers for Disease Control and Prevention in Atlanta. He says Mexico has the technology, drugs and expertise needed to address the virus outbreak.

"We have to recognize that we are in the most dramatic moment of the epidemic," he said. "And the number of cases will unfortunately increase, and that's why we will reinforce all the measures necessary to contain the outbreak."

In addition to schools, most other places where people could gather have been closed. Museums, nightclubs and movie theaters are all shuttered.

Streets Quiet, But Not The Hospital

Much of Mexico City is quieter than usual for a metropolis of 20 million people. The subway is less crowded. Fewer pedestrians and motorists are on the streets, and those who are out are wearing surgical masks.

But one place is displaying the frantic pace of Mexico City — the General Hospital.

Federico Jimenez Vicencio came Monday to see his 22-year-old niece, who has been sick with a bad cough for several weeks. He fears she has swine flu, though doctors have not confirmed that yet, saying only for now that she shows symptoms of pneumonia.

She was a healthy young mother before becoming ill, he says, and she appears to be recovering quickly now that she has been admitted to the hospital.

Cordova said drugs appear to be working against the flu and that the government has tightly controlled their supply to make sure they reach people who need them most. Anti-flu drugs had been openly available in Mexico pharmacies until news of the epidemic spread and panic-buying followed.

Cordova also announced that water cutoffs that had been planned for the capital to address a severe shortfall in the city's reservoirs are being postponed. Additional resources are being given to sanitation departments to address potentially unsanitary conditions.

Education Secretary Alonso Lujambio supported the decision to shut the schools nationwide, calling it a prudent and preventive move.

"Nothing, nothing is more important than Mexicans' health," Lujambio said. He added that students will get a chance to complete their studies when classes resume.