Accessibility links
Making The Case For Intellectuals Public intellectual George Scialabba contemplates the role of great — and not so great — thinkers in his new collection of essays, What Are Intellectuals Good For? Critic Maureen Corrigan calls it "a pleasure to read." 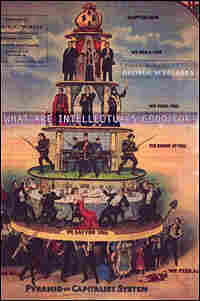 Some years ago, when, at last, I'd finished my belabored dissertation and got my Ph.D. in literature, a relative of mine "congratulated" me by asking: "So, are you making any money now?" It's that kind of attitude, the all-American pragmatism that needs to attach a bottom-line value even to ideas, that prompts the title question of George Scialabba's new collection of essays and reviews: What Are Intellectuals Good For?

The national tendency to equate the term "intellectual" with "ineffectual" hits Scialabba where he lives. Scialabba is one of the last of the free-range eggheads, a nearly extinct breed of public intellectual not affiliated with think tanks or ivory towers. Granted, he graduated from and has long been employed by Harvard, but as a clerical worker, not a faculty member. In his free time, Scialabba writes, acutely, about literature and politics and ethics.

I first came upon his byline in The Village Voice in the 1980s, and once you read one of his lively and learned review essays, you are always looking for more: These days, you'll find him in The Nation or The Boston Review or in those little avant-garde journals like N+1 that celebrity public intellectuals like Christopher Hitchens have left behind for the greener pastures of Vanity Fair and Hardball.

This new Scialabba collection, What Are Intellectuals Good For?, has been published in a beautiful paperback edition by the tiny Pressed Wafer. No one could expect it to be a stealth best-seller. But if you're at all interested in 20th century thinkers like Noam Chomsky, Dwight Macdonald, William F. Buckley, Ellen Willis and Christopher Lasch to name a few, and in the larger question of whether the world would be poorer if they'd never written a word, then you'll find Scialabba's ruminations here invigorating. In fact, just reading Scialabba's collection will make you feel smarter — even if it's not clear if that kind of smarts has any direct social utility.

Scialabba tries to get a handle on just what intellectuals do for civilization, by delving into the work of Great and allegedly Great Minds. In that latter category, critic Edward Said comes in for especially droll and scornful attack because of what Scialabba sees as the damaging legacy of his writing: that is, inspiring this current generation of academics into deluding themselves that they're carrying out political work by teaching, say, post-colonialist critiques of Paradise Lost. If intellectual work matters, Scialabba implies, it has to matter in ways that run deeper than delusionary self-puffery.

Lionel Trilling is one such thinker whom Scialabba prizes for something beyond the obvious. In his shimmering appreciation of Trilling, entitled "The Liberal Intelligence," Scialabba says: "Though nearly everything Trilling wrote had an ultimate political relevance, almost nothing he wrote had an immediate political reference." Later in the essay, Scialabba tries to clarify what he means by that riddling statement by linking Trilling with the great Victorian culture critic Matthew Arnold and demonstrating how both men saw literature primarily "in its moral aspect" — as an agent for teaching "discrimination, receptiveness, patience, magnanimity." That pronouncement surely serves as part of Scialabba's answer to what intellectuals — or at least some of them — are good for.

But that pronouncement wouldn't carry much weight with my bottom-line-only relative and his millions of fellow citizens. Truth to tell, the audience for writers like Scialabba and the journalists and thinkers he admires here was always relatively small. Even in their post-World War II golden age, the New York Intellectuals — Irving Howe, Mary McCarthy, Dwight Macdonald and the rest of that crowd — weren't speaking to a fraction of the audience who was tuning into I Love Lucy. That's why it's something of a miracle that an independent public intellectual like Scialabba has managed to hang on.

If you're one of the fit-though-few whose brain doesn't go into automatic snooze mode at the mention of the word "intellectual," his pieces here are a pleasure to read — supple, accessible and wide-ranging. Writing enthusiastically about the work of journalists Alexander Cockburn and I.F. Stone, Scialabba says that, while they didn't "create monuments of unaging intellect ... they hemmed in everyday barbarism a little." That's a fine way to sum up Scialabba's own achievement: He's not a household name, his essays and reviews won't rock the world, and I doubt that they're making him a whole lot of money, but to those of us who follow his lonely patrols around the perimeter, his work hems in the everyday barbarism of mental laziness and moral evasion, just a little. 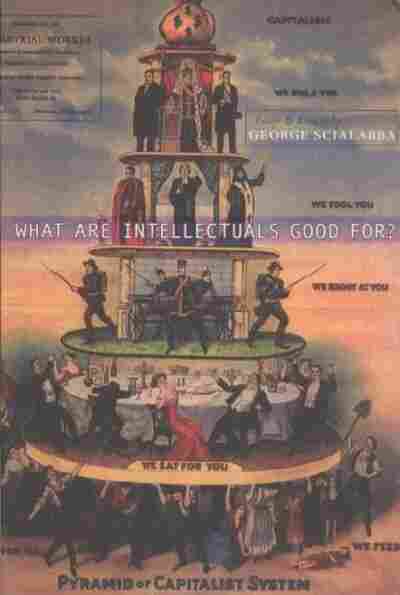 What Are Intellectuals Good For?

by George Scialabba and Scott McLemee

Title
What Are Intellectuals Good For?
Author
George Scialabba and Scott McLemee