Accessibility links
Light Out For Christian America? Is Christian America is coming to an end? Didn't left-wingers spend the past eight years telling us that we were on our way to becoming a Christian theocracy? And, now, we're living through the end of Christian America? So soon? That's certainly a relief. Better buy this issue of Newsweek and read that story! Partner content from The New Republic

Light Out For Christian America?

Light Out For Christian America? 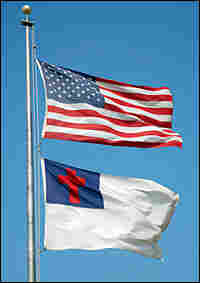 But wait: Don't bother. What you'll find if you plow through its 4,000 or so words is nothing very remarkable. The author, Newsweek editor Jon Meacham, cites some widely reported statistics: For instance, 8 percent of Americans in 1990 claimed no religious affiliation, whereas now 15 percent do. Over that same period, the number of self-identified Christians fell ten percentage points, from 86 percent to 76 percent. That's right, what was once an overwhelming majority of Americans has shriveled to ... a slightly smaller overwhelming majority of Americans. And that means we're living through the end of Christian America. Eventually. Down the road. If trends continue unchanged for a very long time. I guess.

Actually, what Meacham's statistics show is something far less monumental, but far more interesting, than his headline would have us believe. Fights over the role of religion in American public life nearly always concern the question of which theology (and how much) should be incorporated into the country's civil religion--that is, into the spiritual dimension of its national identity. During the middle decades of the 20th century, the victor in this battle was liberal (mainline) Protestantism. (Meacham seems to favor a return to something along these lines.) More recently, over the last decade, the religious right has made a strong push for elevating a synthesis of traditionalist evangelical Protestantism and orthodox Roman Catholicism to a central place in the public square. That, in turn, has led to a backlash among the huge number of Americans who are non-Christians, less fervent Christians, and not-at-all eligious Christians. Which explains why somewhat fewer Americans are now identifying as Christians and somewhat more are identifying as secular.

But this leaves the most intriguing question unanswered: What will provide the theological content of the nation's civil religion now that the evangelical- Catholic alliance has proven unsuitable for a pluralistic country of 300 million people? To my mind, the most likely and salutary option is something that sociologist Christian Smith has called "Moralistic Therapeutic Deism." Here, in Smith's words, is the core of its catechism:

1. A God exists who created and orders the world and watches over human life on earth.

2. God wants people to be good, nice, and fair to each other, as taught in the Bible and by most world religions.

3. The central goal of life is to be happy and to feel good about oneself.

4. God does not need to be particularly involved in one's life except when he is needed to resolve a problem.

5. Good people go to heaven when they die.

Theologically speaking, this watered-down, anemic, insipid form of Judeo- Christianity is pretty repulsive. But, politically speaking, it's perfect: thoroughly anodyne, inoffensive, tolerant. And that makes it well-suited to serve as the civil religion of the highly differentiated 21st century United States.

Would this mark "The End of Christian America"? Only if we define "Christian America" the way the religious right prefers to--namely, as a nation with the outlook of an evangelical Protestant or orthodox Catholic church. Viewed in broader terms, a nation in which a majority embraced something like Moralistic Therapeutic Deism would still be Christian in all kinds of important ways--its moral and civic outlook, for example, would be a distillation of the Christian ethic of loving one's neighbor--it just wouldn't be the kind of Christian nation that makes a theocon feel all warm and fuzzy. And that's a very good thing indeed.

Damon Linker, who teaches writing and religious studies at the University of Pennsylvania, regularly blogs at TNR.com.