Accessibility links
Chef Ming Tsai Makes $10 Dish His Kids Love Ming Tsai, who owns the Blue Ginger restaurant in Wellesley, Mass., took NPR's "How Low Can You Go" family supper challenge and concocted a dish of chicken-and-corn fried rice with lemon spinach. Tsai says fried rice is close to his heart because it's the first meal he ever cooked. And his kids love it. 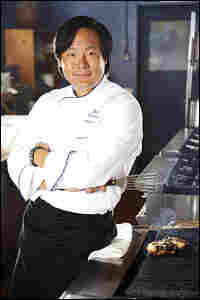 Ming Tsai, who owns the Blue Ginger restaurant in Wellesley, Mass., cooked a chicken-and-corn fried rice with lemon spinach for the "How Low Can You Go" family supper challenge. Anthony Tieuli for WGBH hide caption 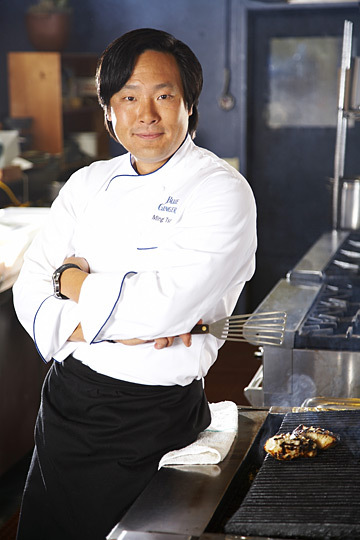 Ming Tsai, who owns the Blue Ginger restaurant in Wellesley, Mass., cooked a chicken-and-corn fried rice with lemon spinach for the "How Low Can You Go" family supper challenge. 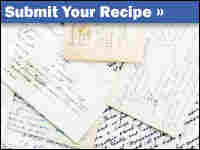 Get the recipe for chicken-and-corn fried rice with lemon spinach.

Ming Tsai, who owns the Blue Ginger restaurant in Wellesley, Mass., has a large following thanks to his Simply Ming cooking show on public television, his series of popular cookbooks and his line of cookware sold at Target.

Tsai grew up in Dayton, Ohio, and says his Chinese family cooked and ate together. That stirred his interest in cooking.

"I always was, still am and will be hungry," Tsai tells NPR's Michele Norris. "And that's why I was always in the kitchen. I would literally, at age 3 and 4 ... hang out in the kitchen hoping that one of my parents or grandparents would throw me a scrap. ... And I always wanted, just like my children now, wanted to get a knife into my hand as soon as I could, and just fell in love with the smell, the sound, the sizzle, everything that I still love about cooking."

For the NPR challenge, Tsai cooked a meal of chicken-and-corn fried rice on top of a spinach salad, because he says the variety of ingredients gives the dish a mix of temperatures and textures.

He says fried rice is very close to his heart because it was the first dish he ever cooked by himself. One day when he was 10 years old, family friends stopped by his house when his parents were away. Instead of asking the guests, "How are you?", Tsai followed Chinese custom and asked, "Are you hungry?" The couple said they were starved, so he told them he'd make fried rice.

"Well, that's great and dandy, but I've never made a fried rice before," Tsai says. "But I've seen my grandparents and parents make it, so I'm like, 'I can do it.' So I chopped my garlic and ginger. Every good Chinese household has leftover rice from the Chinese restaurant. I had scrambled the eggs, I put it all together. They loved it, and that really hooked me. And I realized then that you can make people happy through food."

Tsai says his chicken-and-corn fried rice dish, which by his calculation costs $9.68 to make, is good for you because of the protein from the eggs and chicken, and because it contains spinach.

"But most important — because of the garlic, the ginger powder and the onions — it's got great flavor," Tsai says. "My kids will eat it, and that's the litmus test if your kid will eat it."

Heat a wok or large saute pan over medium-high heat. Lightly coat with oil. When oil shimmers add chicken, season with salt and pepper, and brown, breaking up any large chunks with wooden spoon or spatula. Remove chicken to a plate. Add about 1/2-inch oil to wok and allow to heat; add eggs, which will puff up. Cook scrambled eggs and remove to a paper towel-lined plate. If necessary, add more oil to wok to lightly coat, then add onions, garlic, and powdered ginger, and cook until nicely caramelized, about 5 minutes. Add corn, rice, chicken and egg, and toss to combine. Add naturally brewed soy sauce, toss to combine, and check for seasoning. Place mound of raw spinach in center of four dinner plates. Drizzle with lemon juice and season. Top with fried rice to cover. Enjoy!

*Alternatively, if you're not cooking rice the day before, place the cooked rice in a single layer on a sheet tray, and place in freezer to cool and dry.