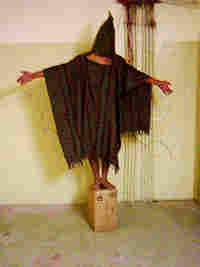 An image obtained by The Associated Press shows an unidentified detainee standing on a box with a bag on his head and wires attached to him in late 2003 at the Abu Ghraib prison in Baghdad. AP photo/file hide caption

When punishment was meted out for detainee abuse documented in the infamous photographs taken at the Abu Ghraib detention center in Iraq, only low-level reservists assigned to the military facility ended up facing court martial and prison time.

But the recent release of Bush-era memos signing off on harsh CIA interrogations techniques and a Senate report that found those tactics were imported to overseas military facilities, has caused a flurry of debate in the very specialized military law community.

Could revelations that the CIA introduced extreme tactics to military prisons and President Obama's decision not to prosecute CIA interrogators who used such tactics, give Abu Ghraib's "bad apples" an opening to clear or at least soften their criminal records?

"It's obvious now that what some defense lawyers said back then was true: They were following orders," says Harvey Volzer, who represented then-Spc. Megan Ambul. She received a dishonorable discharge for failing to report or prevent the mistreatment of prisoners at Abu Ghraib.

"If I were Charles Graner, the only person still in prison, I would be putting in a petition right now to do something," Volzer says.

But even Volzer acknowledges that convicted military personnel like Graner, considered the ringleader of the abuse at Abu Ghraib, face an onerous, if not impossible, road to making a case that their convictions and dishonorable discharges deserve a fresh look.

"It's very difficult to do anything with the courts," he says.

"The simple, unvarnished truth is that the individual conduct of those at Abu Ghraib was clearly in violation of existing criminal statutes," he says.

In those criminal statutes, under the heading of the Uniform Code of Military Justice, Congress has set out what is considered the bedrock of military law.

The code details how military members worldwide are to conduct themselves, including their interactions with prisoners.

And it requires the court-martial of any military person "guilty of cruelty toward, or oppression or maltreatment of, any person subject to his orders."

"You can't maltreat prisoners — it's a law," Myers says. "And the CIA is not subject to the Uniform Code of Military Justice."

So even if the CIA imported its harsh tactics — or the mindset that flowed from the Bush administration's torture memos — military personnel at Abu Ghraib should have known better, says Myers. Longtime military law attorney Patrick McLain agrees.

"There's no way in the world that what was going on in Abu Ghraib was in any way part of their orders," says McLain, who is based in Dallas and has served as a court-martial trial judge.

"Nothing in the evidence of that case suggested that the individuals who were maltreating their charges were doing so at anyone else's direction," McLain says. "They were just a bunch of punks that had freedom and lack of supervision."

Says Myers: "Those accused of abuses at Abu Ghraib had no actual knowledge of the memoranda." And even if they did, he says, lawyers would face a legal conundrum.

"If what was written in those memos is a crime, it can't be law," Myers says. "And therefore, nobody could rely on it — particularly those subject to a statute pertaining to detainee abuse."

Myers said he spent many hours examining whether he could find legal footing for making a memo-related argument. His conclusion: The memos did not have the status of law and so could not pre-empt the Uniform Code of Military Justice.

Volzer argues that though maltreatment and despicable acts occurred at Abu Ghraib, "everybody knows that the CIA was there."

'You Don't Ruin People's Lives Because They Were Stupid'

The best-case scenario for Abu Ghraib convicts like Graner, Frederick and former Pfc. Lynddie England, he says, would be to appeal their dishonorable discharges to the Army's Discharge Review Board.

All of the Army reservists convicted received the most punitive discharge, which halts any military benefits and must be disclosed on future employment applications.

If military personnel have a bad discharge, they have 15 years to appeal to the discharge review board. Its members determine whether the discharge was "proper and equitable."

"These people deserve that," Volzer says. "You don't ruin people's lives because they were stupid."

In an appeal to the review board, those convicted would have to prove that their trials were not conducted justly — that they were, for example, not afforded due process, McLain says.

Their best bet? To argue that their post-conviction behavior has been exemplary enough to merit upgrading the dishonorable discharge to something less onerous.

It appears that for those convicted for their actions at Abu Ghraib, their best defense will lie in the conduct of their lives going forward.

CIA Exempt On Torture, But Not Lynndie England April 20, 2009