Accessibility links
WHO Boosts Flu Alert Level To Phase 5 The World Health Organization increased its pandemic flu alert to its second-highest level. The alert level increase is a further indication that scientists are seeing human-to-human spread of the virus in at least two countries. 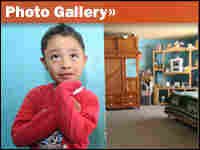 The World Health Organization increased its pandemic flu alert level Wednesday to Phase 5 — its second-highest level and a further indication that WHO scientists are seeing human-to-human spread of the virus in at least two countries.

"It really is all of humanity that is under threat during a pandemic," said WHO Director General Margaret Chan. "We do not have all the answers right now but we will get them."

"All countries should immediately now activate their pandemic preparedness plans," she said.

WHO official Keiji Fukuda said in news briefings Tuesday and Wednesday that officials were looking for signs that transmission is spreading out to neighborhoods and communities, not just susceptible groups such as schools and nursing homes.

Monday, the WHO increased its alert stage from Phase 3 — which means that viruses are spreading from animals to people — to Phase 4, which is characterized by some human-to-human transmission.

The step-up to Phase 5 has been considered inevitable, as the number of cases has continued to rise.

The hike comes as the swine flu outbreak in the United States spread coast to coast on Wednesday, with health officials reporting cases in 11 states from California to Maine, as well as the country's first death from the virus.

The number of confirmed U.S. cases stood at 94 as of Wednesday afternoon, including 51 cases in New York. The virus also spread deeper into Europe as Germany and Austria confirmed their first cases of swine flu Wednesday, bringing the number of affected countries to nine.

The WHO planned to meet Wednesday to discuss its global pandemic alert level. The WHO said Monday that the swine flu outbreak had reached Phase 4 on its 6-point alert scale. That means swine flu is occurring in community clusters and that the risk of a pandemic is increased but is not a foregone conclusion.

Fukuda, WHO assistant director general, said the situation was moving closer to Phase 5, indicating widespread human-to-human transmission and that a pandemic is indeed "imminent."

Obama: School Closures May Be Needed

President Obama suggested Wednesday that school closings may be necessary in an escalating global health emergency that claimed the first death in the United States — a Mexico City toddler who died at a Houston hospital.

Obama said it is the recommendation of public health officials that authorities at schools with confirmed or suspected cases of swine flu "should strongly consider temporarily closing so that we can be as safe as possible."

"Every American should know that the federal government is prepared to do whatever is necessary to control this virus," the president said, adding that he wanted to extend "my thoughts and prayers" to the family of the nearly 2-year-old child who died.

The boy, who had traveled from Mexico to Texas with family to visit relatives, arrived in the border city of Brownsville with "underlying health issues" on April 4 and developed flu symptoms four days later, the Texas Department of State Health Services said. He was taken to a Brownsville hospital April 13 and transferred the following day to a hospital in Houston, where he died Monday night.

In Mexico, the country's health minister said eight people have died from the swine flu out of 99 confirmed cases — with many more cases under investigation. The country has taken drastic steps to curb the virus' spread, closing schools, public venues and other facilities. The government said Wednesday that it would temporarily suspend nonessential activity of the federal government and private business from May 1-5.

Meanwhile, Egypt's government has ordered a nationwide pig slaughter in an effort to avoid panic over swine flu, though there have been no confirmed human or animal cases of the H1N1 virus in Egypt. The Health Ministry says an estimated 300,000 to 400,000 pigs will be culled.

The disease is not spread by eating pork, and farmers were to be allowed to sell the meat from the slaughtered animals.

Experts say that even if cases of the new swine flu disappear with warm weather, the virus may return — perhaps with a vengeance — next winter.

In light of that threat, the Obama administration appears close to announcing a decision to make a vaccine against swine flu as early as this fall.

Normally, it takes six months to make a regular flu vaccine. An effective vaccine protects most people from getting the flu. It would be the primary weapon against a flu pandemic — if it can be made, distributed and put into people's arms in time.

Bruce Gellin, the nation's top vaccine official, says the plan is to make enough swine flu vaccine for all 304 million Americans. The first doses could be available in September — only five months from now. Gellin is deputy assistant secretary of the Department of Health and Human Services for vaccinations, immunizations and infectious diseases.

Gellin says the first decision on whether to go ahead will be in early June. That's when manufacturers would be told to switch from making regular seasonal flu vaccine to a special swine flu vaccine. Fortunately, he says, the nation's flu vaccine makers will by then be finished making all the components for next season's regular flu vaccine.

After swine flu vaccine production begins, Gellin says, "as you continue to watch the situation, the question would be whether you tell them to keep going or to turn it off sometime."

"If they kept going, you would expect that vaccine to be available ... by early to mid-September," Gellin predicts. That's when it would be ready to ship to doctors, hospitals and clinics.

He thinks manufacturers have enough capacity. But not all the swine flu vaccine would be ready at once.

"There may be several million doses available initially," he says, "and then on a daily basis additional doses would be manufactured and released."

That means the first doses of swine flu vaccine would need to be rationed. Decisions will need to be made about who gets it first — the most medically frail and those most at risk of flu complications, or the people on the front lines, like health care and public safety workers, whose roles would be essential in the event of a severe flu pandemic.

But even if a swine flu vaccine can be made in time, there are some big logistical problems. One issue is whether people will need to get two separate flu vaccines in the fall. Public health officials don't want to take the risk of leaving Americans unprotected against seasonal flu.

Dr. William Schaffner of Vanderbilt University says there is talk about mixing a cocktail that would contain both regular flu vaccine and the new swine flu vaccine.

"The discussion is should they do a separate vaccine that would require an additional injection?" Schaffner says. "Or could they insert it into the traditional vaccine?"

Getting two different vaccines to all Americans would be a monumental task, he says. "Having two separate vaccines surely confuses and burdens the delivery system, because we would then have to give two doses. People would have to have two encounters with health professionals."

There's another complication: If the swine flu vaccine were a separate shot, people might need to get two shots of swine flu vaccine plus the regular flu vaccine — a total of three shots. That's because when people get a flu vaccine they've never had before, it often takes an additional booster to get protection.

If that's the case, it will require more than 600 million doses of the new vaccine. That's more than four times more than manufacturers will turn out this year. But the disparity isn't as large as it appears, because regular flu vaccine is actually three vaccines in one — to protect against the three flu strains that normally circulate each year. So if manufacturers only have to make a single-virus vaccine against swine flu, that effectively triples the number of doses they can crank out.

Experts are haunted by what happened with the nation's last campaign to vaccinate against swine flu back in 1976. It was halted after 45 million Americans got flu shots, because several hundred people came down with Guillain-Barre syndrome, a rare paralyzing disease. Some of them died.

And in the end, the threatened swine flu pandemic never materialized.

Dr. Gregory Poland of the Mayo Clinic says that even if a swine flu vaccine were ready to go in September, he'd hold off using it unless swine flu were an immediate threat.

"That's just because you won't have had the clinical tests to know as much about safety as you'll want to know," Poland says.

NPR staff and wire services contributed to this report.