Accessibility links
Rock 'N' Roll At The Top Of The World Tibet's capital Lhasa now boasts half a dozen groups that combine the sounds of traditional instruments with a rock beat. The members of Punkanana, Vajara and other young musicians are trying to change Tibet's traditional musical tastes. 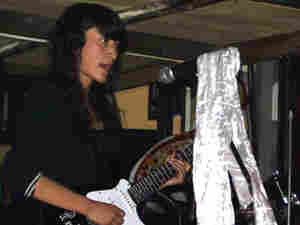 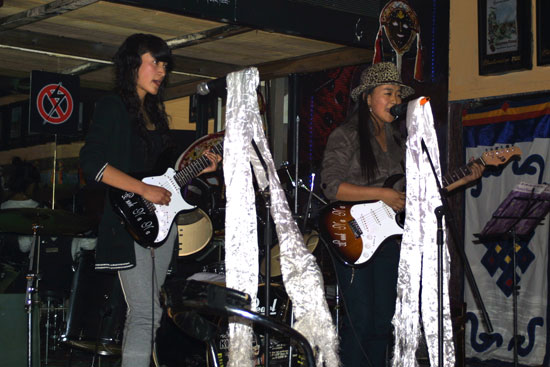 Punkanana, an all-female punk-rock band, performs at the Unplugged nightclub in Lhasa.

The world's highest capital, Tibet's Lhasa, now boasts half a dozen groups that combine the sounds of traditional instruments with a rock beat. One place to hear them is a club called Unplugged.

On a Saturday night, it's filled with more than 100 young people, many of them dressed in tight jeans and leather jackets. They drink beer and snack on dried yak meat. During the day, 19-year-old Zirn Auzn sings in a traditional Tibetan opera troupe. But at night, she comes here, hoping to join a rock band.

Tian Chu is the Mandarin name for Vajara, Tibet's first and most famous rock band. The name roughly translates as "heavenly club," a reference to a musical instrument used in Buddhist ceremonies to defeat evil spirits. Vajara's music can do some pounding, combining heavy metal and blues-rock on traditional Tibetan instruments, electric guitars and drums.

Vajara was founded by drummer Tenzin Dawa. In the early 1990s, he studied music at the Central Nationalities University in Beijing. Back then, Dawa would mostly listen to the music of Cui Jian, the musician credited with popularizing rock throughout China.

"Later on, with access to the Internet, we had access to more information," Dawa says. "Later on, I was affected by the music of U2, Nirvana and Metallica."

Dawa sensed that American and even Han Chinese rock might not appeal to local audiences. So he searched for similarities between rock and his country's folk music. Dawa's band uses a traditional six-string instrument popular in the city of Linju.

"In Linju, there's a music called Linju folk song," Dawa says. "The rhythm of the music is quite similar in rhythm to blues. So we have a point that we can get into rock 'n' roll, so we can incorporate the two kinds of music better."

Vajara is known for reworking traditional folk songs. But despite the musicians' affinity for rock, Dawa says his favorite music is Tibetan opera.

"Heavy metal has some similarities to Tibetan opera, although they are performed on different instruments," he says.

In Tibetan opera, the heavy bass lines are played on traditional stringed instruments. Vajara takes those sounds, along with guttural throat singing, and turns them on their ear. But turning opera into Twisted Sister is jarring for most Tibetans, who are farmers and herdsmen, says Gengdun Pei Jie, a professor of traditional music at Tibet University in Lhasa.

"A number of people here, especially the senior residents, don't like this idea of incorporating traditional music into rock 'n' roll," he says. "But the young people don't mind. The herdsmen, they're not quite used to this. They don't accept this."

One of Vajara's songs promotes Tibetan concepts of oneness with nature and protection of animals. The musicians stay away from controversial political themes, Dawa says. But they do compose songs critical of Tibet's problems, such as rampant materialism. Officials have let them get away with it so far.

"I think they have adopted a wait-and-see attitude," Dawa says. "We write lyrics against selfishness and greed. When we write about such things, they are positive."

Still, Chinese authorities exercise strict control over song lyrics. Sex and drugs are out, but it appears rock 'n' roll is here to stay.