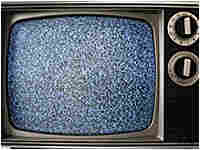 Seriously. I mean it. Don't read on if you're going to be offended by a column all about being offended by the offensive marketing of "adult" stuff on prime-time television.

My 14-year-old son and I have taken to watching reruns of Seinfeld together when his homework is done some nights. Often, my 17-year-old daughter joins us.

The other night we were watching a recording of an episode that aired at 7:30 p.m. on our local Fox affiliate (you remember Fox, the network that has the "conservative" cable news channel). It was the one where Jerry takes George to stake out a cute girl he met at a party but whose name he never got so he has to pretend to bump into her.

Anyway, the show is over and up comes an ad starring "Mr. and Mrs. Mark," an attractive young Asian couple in their bed. "She's a screamer," the man says. The ad is for K-Y Intense, an "arousal gel for her." Mrs. Mark demurely declares she uses it "so that big moment feels like nothing I've ever felt before." Then comes a shot of her standing next to a geyser. Witty. The female announcer tells us that K-Y Intense is "proven to intensify female satisfaction."

God bless America. And thank God my daughter wasn't watching with us that night as I do believe it is possible to literally die of embarrassment. Or feminist outrage.

I assume the ad worked. When I Googled "K-Y Intense," 1,250,000 results came up. Trust me, people are talking about it, YouTubing it and whatever.

Given the depravity of so much that lurks on the television, in the advertising and the programming, is it really column-worthy? I mean, my son and I watch plenty of sports on TV, so we have seen several thousand Viagra ads. Is this any different?

Probably not in any very significant way. I hope you, dear reader, will send in ads that are more reprehensible. But though it may be a mission as futile as Sisyphus', I feel bound to protest when I discover new lows in inexorable degradation of our sensibility, manners, idealism and common sense. Resistance is futile, earthlings, but I resist.

There's a reality show called A Shot at Love with Tila Tequila. Tila became famous for having more Facebook friends than anyone and for taking her clothes off a lot. The new twist of her Bachelor-like show was that both men and women got to compete for attention and affection.

So, is there any aspect of our lives that is off-limits to the peddlers and marketers? Nope. Duh. This isn't trivial. Media and commercial marketing have already infiltrated and polluted our images, our unconscious choices and expectations of love, relationships, sex and intimacy. But the invasion is getting deeper and broader. The female "big moment" is yet another commodity, a marketing opportunity, a product landing zone. And it's smart marketing to target such advertising at teenagers and children watching reruns at 7:30. Get 'em while they're hot.

If I'm wrong and a new specialty lubricant truly can make happier people, I apologize. But I don't think this is a high risk. I think we're letting our lives be commoditized like soft drinks and fast-food hamburgers. And I think that is a recipe for dissatisfaction guaranteed.