Accessibility links
Diet, Exercise Seen as a Key to Staving Off Diabetes Type 2 diabetes is no longer a disease of old age. Increasingly, the disease is hitting people in the prime of life. But research shows that for some people, diet and exercise can be just as effective as drugs in preventing the disease.

Listen
Diet, Exercise Seen as a Key to Staving Off Diabetes

The American Diabetes Association has an online test that estimates your risk of diabetes. 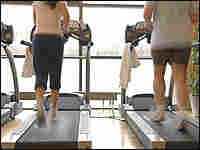 Research shows that for some people, diet and exercise programs can be just as effective as drugs in preventing Type 2 diabetes. iStockPhoto.com hide caption

In beating back the risk of Type 2 diabetes, research shows that diet and exercise programs can be just as effective as medicine for some people.

Type 2 diabetes used to be thought of as a disease that struck only in old age. But physician John Buse says the disease is increasingly hitting people in the prime of life — and even younger.

"The idea of teenagers and people in their 20s developing Type 2 diabetes is really terrifying," says Buse, president-elect of Medicine and Science at the American Diabetes Association.

People who have diabetes can develop a host of life-threatening problems because their bodies can't absorb sugars from the blood properly.

And as the prevalence of the disease goes up, there are also an estimated 50 million Americans with "pre-diabetes" — people whose blood sugar is high enough to put them at risk for the disease. Most are overweight but don't yet have symptoms or complications.

To determine whether someone is pre-diabetic, Buse says, there's a simple post-fasting test to measure blood sugar.

"A lot of them are surprised they're at risk," Buse says.

Take, for example, Dianne Dunn. Ten years ago, when she was in her early 40s, she got screened — only because she happened to walk by a health fair that was being held near her office.

"It turned out to be life-changing for me," she says.

Dunn, a data analyst at the Department of Energy in Washington, D.C., had diabetes in her family and was overweight. So when the results of the screen test showed that her blood sugar was in the pre-diabetic range, she knew she was on the road to developing some of the circulation and heart problems that her dad and aunt had.

At first, she felt powerless. At that time, she didn't think there was anything she could do. But then she was introduced to a diet and exercise plan, developed by doctors at Washington Hospital Center.

Dunn says she's not the same person she was a decade ago.

Back then, she was 40 pounds overweight, her cholesterol was high, and she couldn't walk up her neighborhood hill.

Now, she usually gets to the gym two to three times a week for a 7 a.m. workout.

"I was a total couch potato," she says. "The first time I tried to walk up my block, I was huffing and puffing like a person 80 years old."

Dunn has gotten a lot of help along the way. Her exercise and blood sugar have been closely monitored by researchers in the Diabetes Prevention Program at Washington Hospital Center.

Ten years ago, doctors there set out to determine whether diet and exercise could be as effective as a diabetes prevention drug, called Metformin, in staving off the progression of the disease.

At the time, physician Meeta Sharma and her colleagues were inclined to think that drugs would work better.

"Our own intrinsic appreciation of it was that just medical therapy is going to be the way to go in terms of prevention," she says.

So researchers were quite surprised when they saw the success of Dunn and the hundreds of others in the study who had been exercising for 2.5 hours a week and dieting. After about three years, only 5 percent of them had gone on to develop diabetes, compared with 11 percent of the people who didn't exercise or diet.

It turned out that those in the study who took the medicine didn't fare as well as the exercisers. Sharma says 8 percent of the people on the drug got diabetes.

"When the study came out to show that lifestyle made such a huge difference, it was a real eye-opener for a lot of us," she says.

The results were first published in the New England Journal of Medicine in February 2002, with follow-up studies continuing.

For Dunn, having her blood sugar back in the normal range means she technically is no longer pre-diabetic. And being lighter and stronger, she says, gives her more energy.

"My endurance has definitely increased a whole lot, and I feel better for that," she says.

But Dunn knows she can't afford to slip off the exercise bandwagon. Her doctors have explained that she'll always be at risk of diabetes.

"If she gains weight or if her exercise is not as vigorous as it once was," Sharma says, "then unfortunately she could develop [diabetes]."

Dunn took care of her aunt before she died. She remembers all the diabetes complications, such as vision problems and the exhaustion after dialysis.

"It was just very difficult," she says. "It's hard watching someone struggle."

Dunn says those images give her the will to stick with her healthful lifestyle — even if it does mean waking up at 5 a.m. to hit the gym.