Accessibility links
Behind The Business Plan Of Pirates Inc. Piracy off the coast of Somalia has become an international problem — and an international business. The issues of criminality and the potential for violence aside, a closer look at the "business model" of piracy reveals that the plan makes economic sense. 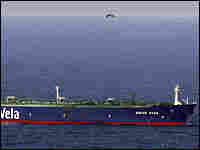 A container is parachuted to a ship being held by Somali pirates on Jan. 9. It's believed the container held ransom money for the ship and its crew — the usual way pirates collect "pay" for their "work" in the piracy business model. David B. Hudson/U.S. Navy/AP hide caption 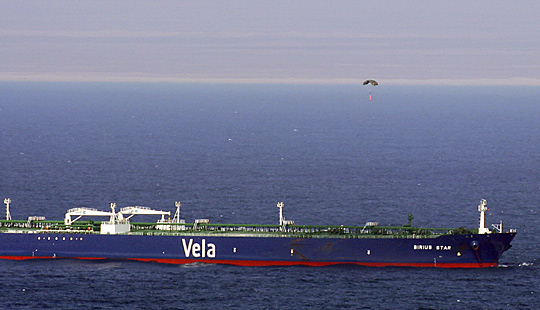 A container is parachuted to a ship being held by Somali pirates on Jan. 9. It's believed the container held ransom money for the ship and its crew — the usual way pirates collect "pay" for their "work" in the piracy business model.

Piracy off the coast of Somalia has become an international problem — and an international business. Navy SEALS rescued an American merchant captain earlier this month after Somali pirates raided the Maersk Alabama as it was making its way around the Horn of Africa to deliver aid.

But the issues of criminality and the potential for violence aside, a closer look at the "business model" of piracy reveals that the plan makes economic sense.

A piracy operation begins, as with any other start-up business, with venture capital.

J. Peter Pham at James Madison University says piracy financiers are usually ethnic Somali businessmen who live outside the country and who typically call a relative in Somalia and suggest they launch a piracy business. The investor will offer $250,000 or more in seed money, while the relative goes shopping.

"You'll need some speedboats; you'll need some weapons; you also need some intelligence because you can't troll the Indian Ocean, a million square miles, looking for merchant vessels," says Pham, adding that the pirates also need food for the voyage — "a caterer."

Staffing Is Not A Problem

And like a cruise ship line, a piracy operation needs a crew. Somalia is an impoverished and largely lawless country with high unemployment. As a result, there is a huge work force looking for jobs.

Once the supplies and employees are ready, the piracy start-up is ready to launch.

But, Pham cautions, the pirates must choose their target carefully.

"Does it have any value? Who is the crew? Do they have any security onboard? Who owns the ship? All of those things have to be factored. This is a business decision, to seize a ship. Westerners command a lot more money than poor Filipinos, whose country and families don't have the money to ransom them," Pham says.

"A European is going to fetch you a lot more than a Filipino. No one is going to ransom an African. I'm being brutally frank, but it's true," he says.

If the pirates have made "good" business decisions, they will soon successfully seize a ship — and have "customers" such as Per Gullestrup, CEO of the Clipper Group, a Danish shipping company. One of the company's ships, with its crew of 13, was hijacked last November in the Gulf of Aden.

When it happened, Gullestrup called the company's insurer, who wanted Gullestrup to pay a ransom and get the ship back — otherwise, the insurer would be stuck with covering a $15 million ship. Gullestrup's company could have tried to take the ship back by force, but that is usually when hostages get killed.

So the insurer put Gullestrup in touch with a professional ransom negotiator.

After three days, the pirates called.

"They introduced themselves, you know, 'My name is Ali; I'm your friendly pirate today' — not quite, but you almost got that sense. They're not making threats or anything. They're very polite in their whole demeanor," Gullestrup says.

Just as Gullestrup had hired a professional negotiator, the pirates hired one, too — usually someone who speaks English well, often a lawyer. In this instance the pirates' negotiator — "Ali" — had spent 29 years in the U.S.

Ali gets a commission out of the ransom, so he has an incentive to drive up the price. Gullestrup laughed at the initial demand for $7 million, calling it "a fantasy number."

He says he never considered paying that amount, because it was "way, way, way above the market and way, way above what we knew was being paid for other ships and ... for similar hijackings."

So the pirates started high, Gullestrup started low, and the haggling began.

For a couple of weeks, the two sides went back and forth, simply restating their positions. Eventually, Gullestrup recalls, "We decided to say to them, 'OK, then there's nothing else to talk about, and we won't call you anymore, and you can call us when you are ready to reduce your demands.' "

Gullestrup says he wasn't worried about the safety of his crew because Somali pirates rarely threaten or kill hostages. The moment crew members get hurt or killed, the pirates lose their most important bargaining chip.

The pirates did eventually blink: But their demand was still much higher than the market rate, so Gullestrup and Ali did some more haggling and finally agreed on a ransom payment — somewhere between $1 million and $2 million (Gullestrup wouldn't give an exact figure).

Faxing Over The Details

The agreement was ironed out, and then Gullestrup literally faxed over the details to the ship. The money was loaded into duffel bags that were put into a watertight container, which was then flown over the hijacked ship and dropped into the water.

"They had a little boat, and they went over, picked up the container and brought it aboard the ship," Gullestrup recalls.

This, of course, is where the pirates settle up. Gullestrup says all the pirates who worked the hijacking showed up for payday. As a result, there were about 30 pirates onboard the vessel.

First, expenses such as food were paid. Then, the pirates paid themselves. Those who took a lot of risk got paid more.

Checking The Time Sheets On Payday

Gullestrup says they actually found time sheets onboard the ship after the pirates had left.

Gullestrup's ship and crew were returned safely, although the pirates didn't actually want to get off the ship right away. That's because they were afraid of getting robbed by other pirates on their way back to shore, Gullestrup says, so he gave them a ride north, dropping them closer to home.

Fortunately, he says, he was going that way anyway. 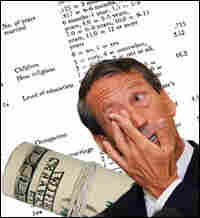 The Republican Party in South Carolina this week voted to censure Gov. Mark Sanford for his extramarital affair with an Argentine woman but stopped short of a formal call for his resignation.

Sanford's marital infidelity may not have cost him his job, but it certainly was a costly choice.

This is the kind of human decision economists love to study. Tim Harford, author of the Dear Economist advice column in the Financial Times, points to an economic model that can help make rational sense of what's usually an emotional issue. The model appears in a paper called An Economic Theory of Extramarital Affairs (PDF) by Ray Fair of Yale, and it focuses on how much time it takes to conduct an affair.

"This must be one of the things that weighs on your mind a lot," Harford says. "And if you're a busy person, like, say, the governor of South Carolina, it's going to be very difficult to clear your schedule and make time for some quality affair."

The dilemma of finding time sounds familiar to Chris Proctor, a married man who admits to having had an affair. "When you're as busy as I am, it is difficult to find the time," says Proctor, a marketing representative in St. Louis.

Three years back, Proctor met a woman from Virginia at a weeklong gathering. The affair lasted for nine months. Looking back on it, he says, it was expensive. He ticks off a list of costly items.

"The cell phone plan, I hadn't planned on," he says. "So that was 60 bucks a month by the time you get text messaging; the phone calls [are] on top of that." He figures he spent up to $5,000 traveling to see his lover. "So it wasn't cheap."

Proctor started to add in other costs — a potential divorce, the cost of his kids not growing up with two married parents — and decided the affair wasn't worth it to him.

Or as Harford would say, the utility Proctor was receiving from the affair was not worth the money or the opportunity cost — that is, what he was giving up in order to have his dalliance.

Economists tend to think about any problem or any choice in terms of preferences. You can't satisfy all your desires at once, because you've got constraints on your budget and your time. Given all your varying preferences, you'll tend to maximize your happiness. You'll rationally choose the best option for you.

People who've had affairs do talk about a measure of rational decision-making at some point in the process — just not always at the outset.

Katherine Johnson works for a law firm in Washington, D.C. She's single, but she encountered a certain married man at the gym who caught her eye. They had both lived in Indiana and hated it, she says. He asked her to lunch, and that lunch was followed by another, and another, until they were having a full-blown affair.

Johnson wasn't betraying a personal commitment of her own. The affair didn't cost her a lot of money. But she did factor in other costs.

"You can't go out on dates," she says. "I couldn't really tell my mom about this. My own integrity was at stake."

She names the benefits.

"It's exciting," she says. "The thought of it is definitely very exciting. For me, the benefit was the companionship and the camaraderie and having someone to talk to throughout the day."

Those benefits outweighed the costs for Johnson for almost a year. When that equation shifted, she ended the affair.

When Your Spouse Is Cheating

Any affair necessarily involves at least three parties: the cheater, the person being cheated with, and the spouse being cheated on. That last person must weigh his or her own costs and benefits.

Harford, the economics advice columnist, hears from this kind of person frequently. In his role as columnist, Harford adopts a persona of someone who finds all of life's answers in economics papers.

A "Mrs. F. in Oxford" might write, "I'm starting to suspect my husband of having an affair. How can I find out?"

Harford says this is a typical "information problem." Mrs. F probably knows people who know whether or not her husband is having an affair, but they don't want to be the one to tell her.

Thus she must to set up what's known as an information market. She can ask her friends and acquaintances to make bets on her husband's fidelity — and those bets should carry real financial consequences.

Obviously, Harford's idea sounds crazy. His plan is also, perhaps, brilliant. It seems to strike people as absolutely one or the other.

Economics is helpful in lining up the rational, measurable benefits of cheating. Proctor says if he had listened to his internal economist, he probably would have determined that $5,000 was more than he wanted to pay for an affair. But he didn't listen.

For politicians, the costs are huge — so much so that they would seem to clearly outweigh any benefits. But every few months, another politician offers another apology.

It may be that these precise economic models can't survive contact with the unpredictability of human beings. If only we could work the passion of X into the utility function — ah, forget it.