Accessibility links
Small Bank Hit With Big Bill In Bailout Centra Bank of West Virginia was the first bank to ask the Treasury Department for an exit from the Troubled Asset Relief Program. CEO Douglas Leech thought it would be simple to pay back the loan. Instead, the bank lost $750,000. 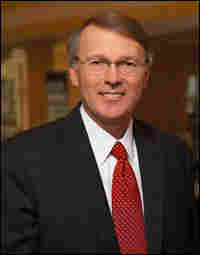 The Troubled Asset Relief Program was crafted at the outset of America's economic crisis by people under a great deal of stress, and probably without much sleep. It's had some unexpected consequences for the banks that borrowed money in the bailout.

Take the case of Centra Bank, a relatively small institution in West Virginia. Centra accepted a loan from the government and promptly paid it back. But that money came with strings attached, and over the past couple of weeks, Centra executives have realized they lost the better part of $1 million in their dance with TARP.

CEO Douglas Leech describes Centra as a community bank. He helped found it in 2000 by maxing out his credit cards and mortgaging his house. Leech says Centra is the kind of place where a human being answers the phone when you call, usually before the second ring. He says Centra is not an international bank and had never made a subprime loan.

"When we make a loan, we can see the collateral, the businesses," he says. "We see them open their doors and close their doors in the evening. We go to church, to school with our neighbors — and that's where our business is done."

As a result, Centra was more than healthy when the crisis hit last fall. As the government unveiled its TARP program to lend money to banks, Leech thought it sounded like a good idea. TARP was seen as a rescue for big troubled banks like Bank of America and Citigroup, but the government made clear that it wouldn't be lending to banks it didn't think could survive.

"Receiving TARP funds was really like Merit Badge in the Boy Scouts," Leech says. "It was being made available to only the strong banks. And you, in fact, may not be looked at quite as favorably if you didn't receive the TARP."

Centra filled out what Leech remembers as a three-page form. Soon the Treasury Department wired the bank what amounted to a $15 million loan. The government got $15 million of "preferred shares" in Centra that paid a 5 percent dividend. In common terms, think of it as a loan at 5 percent interest.

Treasury also got what are called "warrants." Under many TARP contracts, warrants give the government the option of buying stock in the bank at a set price. The idea was that if a bank recovered, and its stock recovered, the taxpayers would make a profit.

After the funding from TARP, Centra found itself with a bigger cushion and more money to work with. But then, Leech says, Congress threatened to change the rules. He heard talk about putting restrictions on how the TARP money could be used and restrictions on taking over other banks, for instance.

Leech called Treasury officials and said Centra wanted out. "They said, 'We understand. We're developing the process to exit the program. We don't have those details worked out.' They told me I was the first banker to call them."

Centra wired back the $15 million plus a little interest to Treasury. But then there came the issue of the warrants. Centra is a private bank, and to protect the taxpayer, the warrants let the government pay $750 for preferred stock worth $750,000.

"Two days later, the lady that runs our wire transfer department came in to me and said, 'Doug got a wire back from Treasury for $750.' Simultaneously, my assistant delivered to me a letter from Treasury indicating that in order for us to exit the TARP program, the pathway was to wire $750,000. Plus interest."

Even though the bank had held the money for only six weeks, Centra had to pay the equivalent of a 60 percent annual interest rate on it. If Centra had stayed in TARP longer, the money would have been a cheap loan. But exiting early came with a stiff penalty.

For Leech, TARP backfired. It was supposed to give banks extra capital. Instead, he lost $750,000.

Since getting the news, Leech has traveled to Washington, D.C., to seek help. He has talked to West Virginia lawmakers, including Republican Rep. Shelley Moore Capito.

Capito says she's not sure what should be done, but that what happened to Centra Bank feels unfair.

"I think we need to look at it to make sure that we don't penalize people who are trying to do the right thing," says Capito. In a lot of cases, she says, banks trying to get out from under TARP are local lenders "who are very healthy."

Centra was the first bank to fully pull out of TARP. Leech says he has been hearing from other bank CEOs who also want to leave the program — and who want his advice on getting out.