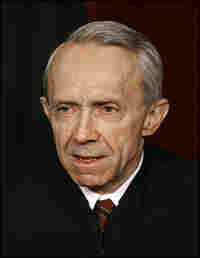 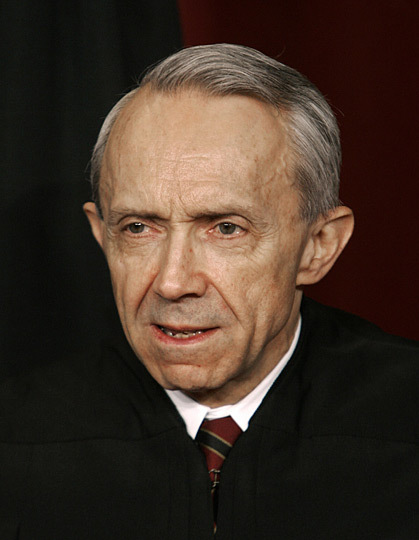 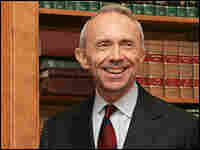 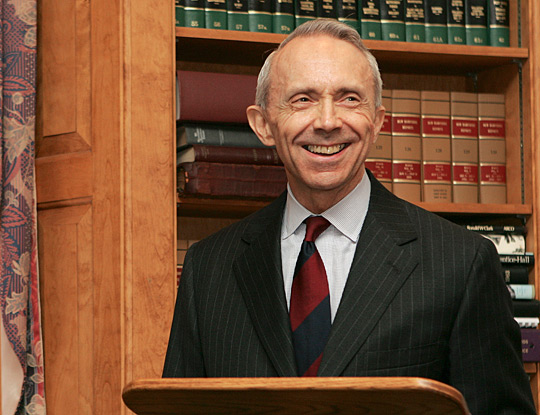 U.S. Supreme Court Justice David Souter smiles after speaking during a dedication ceremony at the State Supreme Courthouse in Concord, N.H., on July 9, 2008.

Supreme Court Justice David Souter is planning to retire at the end of the current court term.

The vacancy will give President Obama his first chance to name a member of the high court and begin to shape its future direction.

At 69, Souter is nowhere near the oldest member of the court. In fact, he is in the younger half of the court's age range, with five justices older and just three younger. So far as anyone knows, he is in good health. But he has made clear to friends for some time that he wanted to leave Washington, a city he has never liked, and return to his native New Hampshire. Now, according to reliable sources, he has decided to take the plunge and has informed the White House of his decision.

Factors in his decision no doubt include the election of President Obama, who would be more likely to appoint a successor attuned to the principles Souter has followed as a moderate-to-liberal member of the court's more liberal bloc over the past two decades.

In addition, Souter was apparently satisfied that neither the court's oldest member, 89-year-old John Paul Stevens, nor its lone woman, Ruth Bader Ginsburg, who had cancer surgery over the winter, wanted to retire at the end of this term. Not wanting to cause a second vacancy, Souter apparently had waited to learn his colleagues' plans before deciding his own.

Given his first appointment to the high court, most observers expect Obama will appoint a woman, since the court currently has only one female justice and Obama was elected with strong support from women. But an Obama pick would be unlikely to change the ideological makeup of the court.

Souter was a Republican appointed by President George H.W. Bush in 1990, largely on the recommendation of New Hampshire's former Gov. John Sununu, who had become the first President Bush's chief of staff.

But Souter surprised Bush and other Republicans by joining the court's more liberal wing.

He generally votes with Stevens and the two justices who were appointed by President Bill Clinton — making up the bloc of four more liberal members of the court, a group that has usually been in the minority throughout Souter's tenure.

Possible nominees who have been mentioned as being on a theoretical short list include Elena Kagan, the current solicitor general who represents the government before the Supreme Court; Sonia Sotomayor, a Hispanic judge on the U.S. Court of Appeals for the Second Circuit; and Diane Wood, a federal judge in Chicago who taught at the University of Chicago at the same time future President Barack Obama was teaching constitutional law there.

President Obama's choice has an excellent chance of being confirmed by the U.S. Senate, where Democrats now have an advantage of 59 seats to the Republicans' 40.

By the time a vote on a successor is taken, the Senate is anticipated to have a 60th Democrat, as the Minnesota Supreme Court is expected to approve the recount that elected Democrat Al Franken over incumbent Republican Norm Coleman in that state.

Souter was a graduate of both Harvard College and Harvard Law School. He also attended Magdalen College at Oxford University in England. But his academic pedigree was only one reason he had been regarded as a thinking man's jurist and a highly thoughtful conservative prior to his elevation to the nation's highest bench.

Once appointed and confirmed, he soon became a "surprise justice." He bucked the expectation that he would join the court's conservative wing — then led by Chief Justice William Rehnquist, who was appointed to the court by President Nixon and elevated to chief by President Reagan, and featuring Reagan appointees Antonin Scalia and Anthony Kennedy.

The appointing president had been assured of Souter's credentials by the White House chief of staff, John Sununu, who had known Souter as a conservative member of the New Hampshire Supreme Court when Sununu was that state's Republican governor.

But when confronted by the ideological debates and partisan landscape of Washington, Souter surprised both Sununu and Bush by aligning himself with the court's more moderate wing, which also included Reagan appointee Sandra Day O'Connor.

Souter was unconventional in other ways beyond his ideological independence. He moved to Washington to attend court sessions, but he returned to his beloved roots in New Hampshire whenever possible, including for the court's long summer hiatus each year.

Rather than fly home, Souter preferred to drive. He also resisted other forms of contemporary technology and convenience, holding out against the cell phone and e-mail and continuing to write his opinions and dissents in longhand, using a fountain pen.

Once engaged but never married, Souter was once listed among the capital's 10 "most eligible bachelors" but remained in that category of "confirmed bachelors."

He was never a creature of the capital city's social scene, living in a spartan apartment in the city not far from the Supreme Court offices on Capitol Hill. Although he served nearly two decades on the high court, he made no secret of his preference for the lifestyle and pace of his native rural New Hampshire.