Accessibility links
The Nation: Exit Justice Souter Supreme Court Justice David Souter has been quietly telling his circle of friends and legal compatriots that he wants to retire. If that happens, a woman will likely be named in his place. 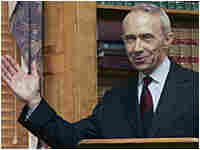 Courtesy of The Nation

Supreme Court Justice David Souter, who has reportedly informed the White House that he plans to retire, is a relative youngster in high court terms.

Five of the current justices are older than the appointee of former President George Bush who turned out to be more liberal on a number of issues than the appointees of former President Bill Clinton. So, at 69, Souter could easily be looking forward to another two decades on the bench. (After all, Justice John Paul Stevens, another Republican appointee gone liberal, is 89 and going strong; most court watchers think Stevens is aiming to surpass the record of Oliver Wendell Holmes Jr., who retired — just shy of age 91 — as the oldest justice in the high court's history.)

But Souter has been quietly telling his circle of friends and legal compatriots – the former attorneys general who he got to know when he served as New Hampshire's chief law enforcement officer – that he wants to retire. Though fit and energetic, Souter has never made any secret of his distaste for Washington and his long-term desire to return to his native New England.

Now, Souter appears to have formalized an exit strategy, as reports circulate that he has informed the White House of his intention to retire at the end of the court's current term.

If Souter follows through on the plan, President Obama will be making a court appointment that, while it is unlikely to alter the court's ideological balance, could bring needed diversity to the bench.

The early line holds that Obama will pick a woman to sit with the court's lone female justice, Ruth Bader Ginsburg, an ailing member of the court's more liberal wing.

Solicitor General Elena Kagan, who has already been appointed to a top position by Obama. She was Kagan was confirmed by the U.S. Senate on March 19, 2009 by a vote of 61 to 31, after conservatives objected to the former Harvard Law School dean's positions on a number of issues.

2nd Circuit U.S. Court of Appeals Judge Sonia Sotomayor, whose Hispanic background could make her a politically-attractive nominee. A centrist who was first nominated to the federal bench by President George H.W. Bush and then nominated to the U.S. Court of Appeals by President Bill Clinton, she was criticized by some conservatives as a "judicial activist." But the 1998 approval of her appeals court appointment came on a 68-28 vote, with broad Republican support.

Federal Judge Diane Wood, who once taught at the University of Chicago with a young constitutional law professor named Barack Obama. His 1995 appointment by Clinton won unanimous approval from the Senate, even though the former clerk for Supreme Court Associate Justice Harry Blackmun has taken hits from social conservative groups for her "strongly pro-abortion" views.

No matter who Obama picks, the chances that his nominee will be confirmed with relative ease have risen significantly in recent days. Pennsylvania Senator Arlen Specter's switch from the Republican caucus to the Democratic caucus moves a key member of the Judiciary Committee into the majority-party camp. If and when Minnesota Democratic Farmer Labor Party candidate Al Franken is finally seated, Democrats will have the 60 votes they need to advance a nomination without having to contend with a Republican filibuster.

The one complexity that conservatives have highlighted involves the fact that the Senate Judiciary Committee operates under an arcane set of internal rules, including one that usually requires the consent of a minority party member to advance a controversial nomination. Specter was the Republican most likely to assist the Democrats in such a circumstance.

But it is worth noting that Utah Senator Orrin Hatch, the ranking Republican on the committee, oversaw the confirmations of both Sotomayor and Wood when he served in the 1990s as chairman of the Judiciary Committee. In the case of Sotomayor, Hatch broke with more conservative Republicans to back her nomination to the appeals court.