Accessibility links
New Strain May Edge Out Seasonal Flu Bugs If history is any indication, the new swine flu virus isn't going away anytime soon. The virus is not merely a case of gradual evolution. The big change scientists see with this strain is called a "shift." 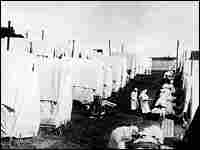 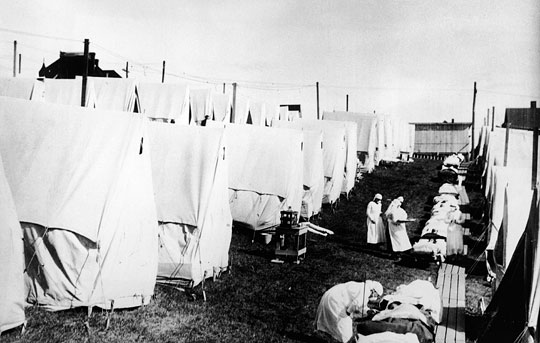 Nurses care for victims of the 1918 "Spanish flu" pandemic during an outdoor fresh air cure in Lawrence, Mass.

Richard Harris Reports On The Flu's Evolution On Morning Edition

Biologists say there's a good chance that the emerging flu strain could establish itself as the dominant strain of influenza in future flu seasons.

Three times in the last century, a substantially new flu virus has emerged and displaced the existing strains. That's quite different from the usual pattern, in which the circulating virus mutates just enough to keep vaccine makers tweaking their annual product.

"You can think of those strains, that vary from year to year, as though they were cousins in the same family. They are variations on a theme," says William Schaffner at Vanderbilt's medical school. But he says the emergence of this new virus is different. This virus, which originated partly in pigs, could be a game-changer.

"This one is completely new," Schaffner says. "This one is a stranger in town. We've never seen one like this before."

The new swine flu virus has continued to spread, with more than 1,200 confirmed cases and 27 deaths worldwide. All but one of the fatalities occurred in Mexico, where officials decided Monday to allow most businesses to reopen Wednesday.

In the U.S., the number of confirmed cases stood at 310 in 37 states as of Monday evening.

The new swine flu virus is not merely a case of the usual gradual evolution. The big change scientists have seen with this strain is called a "shift."

The most infamous shift was the virus that appeared in 1917 and caused the deadly flu pandemic of 1918. That virus then became the dominant variety of flu for several decades. Then in 1957, it was displaced by another shift virus.

There was yet another shift in 1968, says Stephen Morse at Columbia University's Mailman School of Public Health.

"There does seem to be a rule of thumb about this, which is that every pandemic in the 20th century essentially established the variants that would become the circulating seasonal influenzas until the next pandemic came along to displace them," Morse says.

Each shift led to a stronger-than-usual flu season, but each one also calmed down after a year or two, once the population became exposed to the new viruses or were vaccinated. Morse says the question now is whether the new H1N1 swine virus will keep moving from person-to-person efficiently.

"If it continues like that, we'll expect to see this virus chugging along, and probably the next seasonal influenza will be a descendent of this one," Morse says.

The question, then, is how nasty the virus will end up being. Professor John Oxford at St. Bart's and the Royal London Hospital says there's some reason for cautious optimism.

"In one sense, it's one of the mildest shifts because most people on the planet have got some memory, have come across H1N1 viruses since 1978," Oxford says.

Even though health officials are calling this new virus H1N1, that's also the type of virus that's in wide circulation today. And it has an interesting history. It was the dominant flu virus through the 1920s, '30s and '40s. Oxford says it disappeared in 1957, when it was displaced by another flu virus. But then a strain of H1N1 suddenly reappeared in 1977.

"Now where could it have come from?" he asks. "We reckon now, in retrospect, it was probably released accidentally from a laboratory, probably in northern China or just across the border in Russia, because everyone was experimenting with those viruses at the time in the lab."

It was nothing malicious, Oxford believes, just some flu vaccine research that broke out of containment. The descendents of this virus are still circulating. He notes that most people who have encountered the newly emerged H1N1 virus seem to have developed only mild disease, and he speculates that's because we have all been exposed to a distant cousin, the H1N1 virus that emerged in the 1970s.

"That escaped virus perhaps will provide some benefit now in the face of this pig thing," Oxford says.

This is well-informed speculation, not iron-clad assurance. And there is another less reassuring lesson from the previous big shifts in flu viruses. They caused mild disease when they first appeared in the spring, but they all caused big flu seasons when they returned in the fall as the new dominant virus. That's one reason that health officials are taking the new virus very seriously.