Accessibility links
New Grid May Be Needed, But So Is Smarter Energy Consumption Plans are under way to beef up the nation's electricity transmission grid. At the same time, conservationists are trying to reduce the vast amount of power wasted in homes and offices. If we used energy more efficiently, would we need to spend billions of dollars on a new grid?

The last of a 10-part series 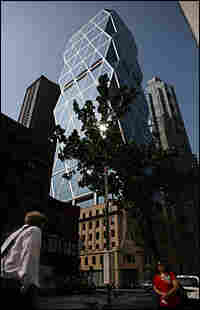 The Hearst Tower in New York City was one of the first skyscrapers in the city to be certified as environmentally friendly by LEED, the Leadership in Energy and Environmental Design. Emmanuel Dunand/AFP/Getty Images hide caption 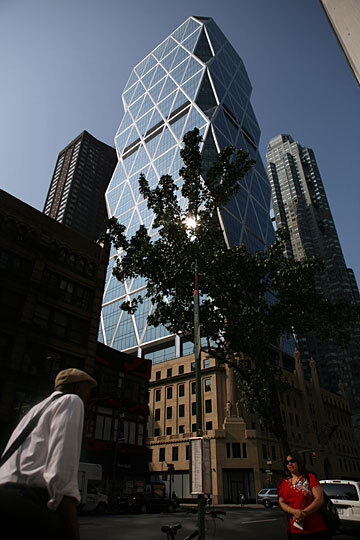 The Hearst Tower in New York City was one of the first skyscrapers in the city to be certified as environmentally friendly by LEED, the Leadership in Energy and Environmental Design.

In a series of ten stories airing this week on Morning Edition and All Things Considered and published here on NPR.org, we examine the costs, the politics and other challenges of upgrading the country's electricity grid.

Power companies are planning to beef up the nation's electricity transmission grid. At the same time, conservationists are trying to reduce the vast amount of power wasted in Americans' homes and offices. That raises a question: If we simply used energy more efficiently, would we need to spend billions of dollars on a new grid?

To answer this question, we first need to know how much electricity buildings of the future could save. A good place to start is an office in downtown Washington, D.C. — the new home of the U.S. Green Building Council, which pushes for and certifies hyper-efficient construction.

Project architect Ken Wilson says the idea is to make the office a model of efficiency. It's a glimpse of the future.

'The Mother Of All Green Projects'

"What we're doing in this project is dramatic," he says. "The energy load for our lighting is being reduced in half. And we've loaded it up full of all kinds of energy-saving devices that are in some ways a paradigm shift."

For example, there are no desktop computers in this office — only energy-efficient laptops. And even those won't be humming away all the time. The new paradigm is that energy is only consumed when it's actually needed.

A set of cubicles has something that looks like a smoke detector overhead. The gizmo actually senses human bodies and is wired into the work pod's electrical outlets.

"The idea is that when someone leaves the pod, and the occupancy sensors will sense that they're not there, then that outlet shuts off. And so if they've got a task light plugged into that or a laptop computer into that, it goes off," Wilson explains.

The laptops revert to battery mode or save active work and shut down, saving energy that would otherwise be wasted. Air conditioners are also set up so that they don't cool empty offices. Brendan Owens of the Green Building Council points out that instead of desks, there is a broad corridor of white carpet near the windows that reflects natural light deep into the work space.

"At the peak of the day, when we're getting most of our light outside the space, we can turn off all our interior lights, and that shuts our demand way down," Owens says.

The office kitchen is outfitted with two giant, hyper-efficient refrigerators — to serve the needs of a young and hip work force that saves energy by riding bikes or transit to work and likes to brown-bag for lunch.

Wilson, the architect, says when this "mother of all green projects" is done, it should use about half the electricity of a conventional office. In fact, the job should end up earning the highest possible rating — platinum — from the U.S. Green Building Council, the very folks who will populate the work pods and offices.

Because this office is a showcase, Wilson could make many expensive choices and not worry so much about whether they'd ever save enough in energy bills to justify the cost. That said, Wilson imagines the energy savings if every office in downtown Washington were able to accomplish what this one is doing.

"Certainly if you were to take every building and cut the energy use by 50 percent, that would go a long way toward solving the need for more power plants," he says.

Revis James, who works for the industry-funded Electric Power Research Institute, says his organization spends a lot of time looking down the road 20 or 30 years to see what our future electricity needs will be.

James says demand has been growing thanks to a proliferation of energy-hungry microwaves, computers, giant TVs and other plug-in devices. That wave of invention may be cresting.

"Over the time frame of the next 20 or 30 years, I don't think we're going to see a tremendous change in the fundamental nature of the devices and the types of things that create a demand for electricity," James says.

What will really drive new demand is the steady trickle of a growing economy — and constant population growth.

For example, the Census Bureau projects that in 30 years, the United States will have 100 million more people, in addition to the 300 million residents today. And James figures that population growth will more than wipe out the gains from efficiency programs.

What's more, some of the things that are now powered by fossil fuels, like cars and even furnaces, may eventually be phased out as climate change is addressed.

"A time will come when the emissions we get from natural gas will become too much, and we'll have to eliminate that, too," James says.

What energy source is left? Electricity, presuming it's from a carbon-free source.

So even the optimists acknowledge that new transmission lines must be built, and the existing electric grid must be made smarter.

That brings us back to Owens, at the Green Building Council's flashy new digs in Washington.

"We need to have the smart grid work with smarter buildings to really make sure the potential of both is optimized," he says.

Both approaches are tools for getting the job done, but they're not solutions in themselves.