Accessibility links
Movie Review: 'Revanche' — Revenge Thrills, Served Up With A Certain Grace Goetz Spielman's Revanche juggles the sacred and the profane, the pastoral and the urbane, by way of a muscular plot touched with black comedy. Critic Ella Taylor says it's got a touch of the timeless. Recommended

Revenge Thrills, Served Up With A Certain Grace

Revenge Thrills, Served Up With A Certain Grace 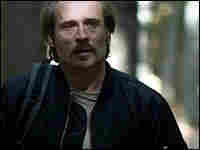 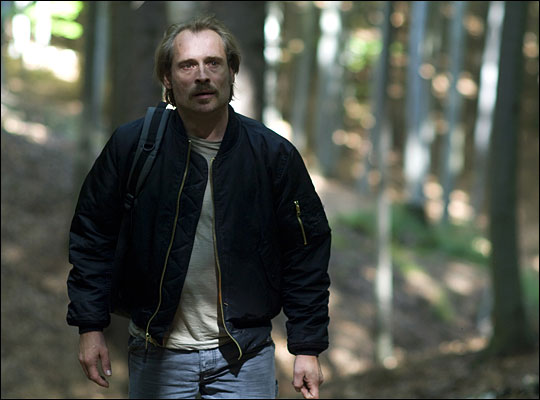 Bordello bouncer Alex (Johannes Krisch) flees the city for the countryside, hoping to make a new life with his prostitute lover. 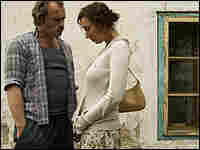 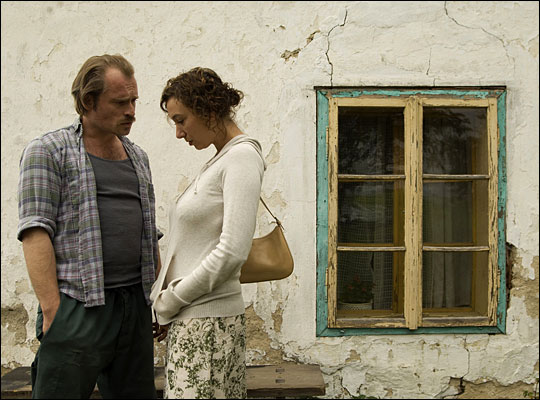 After tragedy strikes, Alex finds comfort with Susanne (Ursula Strauss), the Christian but hardly dogmatic wife of a local policeman.

It's not often you come across a revenge thriller driven by God, goodness and mercy — let alone one that's partially set in a Viennese house of prostitution.

Written and directed by Goetz Spielman, the new Austrian movie Revanche deftly juggles sacred and profane by way of a muscular (if hardly fresh) plot. Touched with black comedy, it's the story of a smoldering encounter between an urban lost soul and a floundering country couple; like Flannery O'Connor, Spielman comes by spiritual redemption through blood, guts and sweat.

Johannes Krisch, a bulky theater actor whose raw, agitated carnality recalls the young Gerard Depardieu, plays Alex, an apparently reformed thug who is deeply in love with a pliant Ukrainian woman (Irina Potapenko) who works at the brothel where he ekes out a living as an enforcer.

They want out, and soon enough they make their move, but their ludicrously inept escape plan goes tragically awry not far from the beautiful rural backwater where Johannes grew up. There, the enraged former convict becomes fatefully entangled with a troubled local cop (Andreas Lust) and his seemingly sensible Christian wife (the excellent Ursula Strauss) who have yet to discover they're mixed up in his business.

Nature has a sly and defining role to play in Revanche, but Spielman won't go the safe route: no parable, for him, of the pristine countryside triumphing over the blemished city. Good and evil rub up against one another in both locales, with just about everyone doing battle with their lesser selves.

He serves up a pimp with kindness (or is it a lower form of cunning?) in his profit-seeking heart; a macho policeman tortured by fears of impotence; a devout wife who invites sex with a stranger and calmly informs him that "God will understand."

More important, he serves up a tragic hero tortured by ungovernable inner conflicts, all flagged by the repeated whine of the machine he uses to cut wood furiously for the dour grandfather (Hannes Thanheiser) who raised him. If Alex cuts a menacing figure on his nightly prowls around the perimeter at that prosperous house deep on the woods, he's also an acutely vulnerable prodigal son, who has returned warped by traumas both recent and — Spielman subtly implies — long ago.

With its disenfranchised young men and imported hookers, its domestic distress and urban anomie inexorably seeping into a rural community, Revanche is in some ways a highly contemporary story — one whose startling formal and thematic similarities to the upcoming German thriller Jerichow make one fear for the well-being of the new Europe, and one whose vibrancy makes one exult over the vivid cinema emerging from all this chaotic change.

If all you want from Revanche is classy filmmaking, Spielman is happy to give you a tautly paced noir thriller laced with lyrical grace notes — a woman closing one living-room curtain while leaving the other open in ambivalent welcome; an old man gruffly offering his grandson freshly picked apples or sitting happily alone playing an accordion — whose possible meanings dawn on you only gradually.

But there's also more than a touch of the timeless Grimm fairy tale about Revanche — and an echo of the tragic Greek, too. The title does translate to "revenge," yes, but it digs bracingly past matters of conscience and culpability into questions of how and why we live.

The movie begins and ends, it's worth noting, with an object — a burden, of sorts — dropped into still water. What you make of that may depend on your spiritual beliefs. But you don't have to trust in a higher authority to see the climax, which holds out a promise of new life born of a shocking mix of apparently incompatible blood, as a kind of gift to a future without boundaries.