Accessibility links
Military Homebuyers Seize Opportunity In Calif. A military salary has never been enough to buy into California's overpriced housing markets, but that is changing because this region has led the nation in foreclosures. 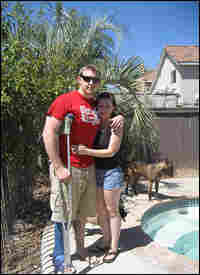 Marine Sgt. Chris Gibson and his wife, Danyell, just bought their first home in Murrieta, Calif., a community that had 7,000 foreclosure filings in the last year. Nancy Farghalli for NPR hide caption 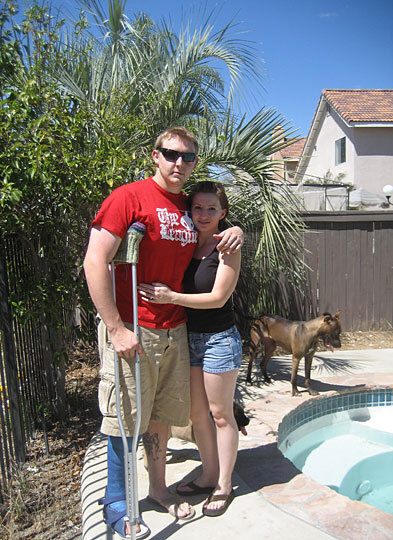 Marine Sgt. Chris Gibson and his wife, Danyell, just bought their first home in Murrieta, Calif., a community that had 7,000 foreclosure filings in the last year.

Bad news for the economy may mean good news for some homebuyers. Median home prices across the country have continued to fall. In March, western states like California, Arizona and Nevada saw home prices drop by 11 percent, according to the National Association of Realtors.

For first-time homebuyers, that's great news. Many people who were priced out of the housing market for the past few decades are now able to buy in, especially in markets with an excess of distressed and foreclosed properties.

That's the case in Southern California, where military families are beginning to take advantage of falling home prices. A military salary has never been enough to buy into the overpriced housing markets in this part of the country, but that is changing because the region has led the nation in foreclosures in the past few months.

They bought a two-story house on a street with cookie-cutter homes that range in color from brown to beige to peach.

The price was $193,000 and the picture isn't perfect just yet. They don't have a fridge, a stove or a lawn. They have weeds. And they are a bit wiped out from the move.

Danyell Gibson says it's all worth it: "We have been renting for so long. When you have a house, we feel like we have taken a step up. And you know for a military family, that's kind of a big deal."

Their mortgage is $1,150 — that's nearly $500 less than the rent on the apartment at Camp Pendleton. Chris Gibson says they were sick and tired of living on base.

"You can't customize your own house at all" on the base, he says. And they are paying less for their new house — with three bedrooms, three baths, a two-car garage and pool — than they did for their two-bedroom, one-and-a-half bath apartment.

The couple represents a growing trend of military families buying into the region's real estate market for the first time. Chris Gibson says it's probably the only time in the past 10 years that an active-duty sergeant could afford a nice home in San Diego County.

The Gibsons were able to afford this home because they bought a bank-owned foreclosure, which usually means a below-market price. In addition, they had some help from the military in the form of a Veteran Affairs "no-no loan" — no down payment, no closing costs.

Their real estate agent, Francisco Lopez, explains that the VA rolls its fees into the loans: "They basically don't have to come out-of-pocket and generally we negotiate the closing costs with the bank."

According to USAA, a financial services company helping military families nationwide, the number of VA loan requests has doubled since 2008. Lopez says he has helped 25 military families buy homes in the last year and says the VA system is already getting overloaded.

Lopez says it is taking more time than usual for the VA to close loans and to get an appraiser to properties because more people are applying for the loans.

"They would not be able to buy in this market three years ago," he says. "You know, good for our military, the people who can now be homeowners. They deserve it."

One downside in a neighborhood like this one in Murrieta, however, is that there are dozens of foreclosed homes on every street. That depresses housing prices even further and degrades the neighborhoods.

Danyell Gibson says she's already noticed that many of her neighbors are in the process of refinancing or getting their loans modified because they are having difficulties paying their mortgages. Some are even losing their houses.