Accessibility links
Historic NYC Sheet Music Store To Close In two weeks, the Joseph Patelson Music House, neighbor to Carnegie Hall in Manhattan, will close its doors after six decades in the business of selling sheet music. From the most accomplished conductors and soloists to young music students, they've all shopped for music and guidance at Patelson's. 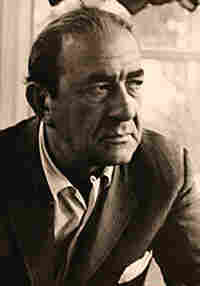 Joe Patelson, the first in the family to run the store. courtesy of Patelson hide caption 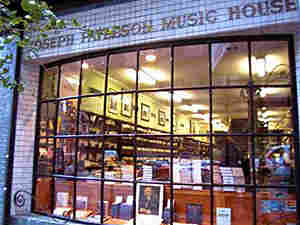 The front of Patelson's, on West 56th St. courtesy of Patelson hide caption

Joseph Patelson Music House is — appropriately — right across the street from the stage door of Carnegie Hall. For 70 years, it has been a place where conductors, instrumentalists, singers and students of music have congregated. Searching through its vast collection of sheet music, you might rub elbows with Isaac Stern or Placido Domingo.

But today, in a declining economy, business is way down and sheet music can be bought online. So Patelson's, as everyone calls it, will close when all of its current inventory is gone. Musicians from all over are trying to get to the store one last time — to buy a memento, or maybe just refresh a memory.

Patelson's is an old carriage house turned into a store. Inside it feels like a small shop on a Parisian side street. There are books, posters, and bins and bins of sheet music — sections for violin, cello, for every instrument and for voice.

Paul Oakley, who lives in North Carolina, came to pay his respects.

Oakley was on his way to conduct the Pennsylvania All State Choir but he made a special detour into New York City to get to Patelson's.

"When I was 13 and bought my first editions of Bach Cantatas, [my] first Messiah score, I always bought them from Patelson's," Oakley says. "So when I heard it was closing, I flew here for one hour to be at Patelson's."

Jocelyn Lieberfarb, an opera singer and voice teacher, holds a huge stack of sheet music as she sifts through what's left. She points to a song called Bless This House.

"I have an old copy that was my mother's that I sung, where the pages are all torn and frayed," she says. She points to another score. "This she taught me when I was 2 — Humperdink's Evening Prayer. I will teach it to my younger students."

For Lieberfarb, the joy of Patelson's is finding pieces that are out of print. For Alisa Leeman, a voice student, it's being able to feel the pages. For conductor and musical director Larry Yurman, it's the fact that every piece of music could be at one's fingertips immediately.

"You never thought twice," Yurman says, "if you needed a piece of music — had to find a piece of music — there was a place to go, and you could browse and you could ruminate if you wanted it or not. I found so many pieces that are probably not in print any more, pieces that today's generation would not be familiar with. It is just the tangible quality of being able to touch these and page through and see if you like this edition or another edition. When you are online you don't get that."

One member or another of the Patelson family has run this store for about 70 years. Joseph Patelson was an 18-year-old college student when he went to work as a clerk at Ernest Cook's music shop in 1929. When Cook died, he left the business to his employee.

Joseph Patelson was followed by his son, Dan, and now his daughter-in-law, Marsha. She's run the shop for the last five years. A cellist and music teacher, she says she's never been a real businessperson — and business has been declining for years. She took out loans; she refinanced her house. But starting last summer, business really went down hill. She remembers going to the bank and not being able to meet a payroll.

"About a month ago, I realized we were on our last, you know, straw," Marsha Patelson says. "I made the decision — I went into a very dark place. I didn't answer phone calls for a couple of days because this was a hard decision. Because it's not only me; it's my employees, it's the world."

Of course, you can get all kinds of music on the Internet. The difference, says Oakley, is that Patelson's had sales people who worked in music for decades and would tell you exactly what they thought.

"There was always someone to give you their opinion, whether you wanted it or not, about what the edition was going to be like, if it was any good," he says. "I remember one time I bought something very proudly and the guy said, 'You're buying a piece of crap' and made me put it back on the shelf. How often is that going to happen in your life?"

A little less often when Joseph Patelson Music House closes its doors for the last time.