Accessibility links
Pete Seeger At 90: An Appreciation He sang for workers in the '40s, civil rights in the '50s and '60s, and against all the wars since Vietnam. When he performs tonight, with an all-star lineup at Madison Square Garden, the audience will surely sing along.

In honor of the iconic troubadour's 90th birthday, NPR Music partner Folk Alley has put together a five-hour mix of Pete Seeger classics and great covers. Hear the stream here: 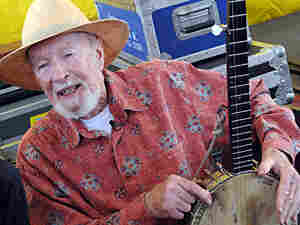 At 90, Pete Seeger is still maintaining a busy touring schedule this year, including an appearance at the New Orleans Jazz and Heritage Festival. Rick Diamond/Getty Images hide caption

Pete Seeger turns 90 today — and he's still performing. In fact he's playing and singing tonight at a birthday bash in Madison Square Garden, alongside Bruce Springsteen, Dave Matthews, Emmylou Harris and many others.

Proceeds from the show will go to Clearwater, an organization — and a boat — launched by Seeger 40 years ago to raise awareness about pollution in the Hudson River.

Pete Seeger firmly believes that song can bring us together and make our lives better. He sang for and with workers in the 1940s. His beliefs in their rights — and his refusal to testify about those beliefs before Congress — got him blacklisted.

But Seeger kept singing. He sang for civil rights in the '50s and '60s. He sang out against the Vietnam War — and all of the others since. He continues to encourage all of us to sing: You can't leave one of his concerts without singing along.

But as we celebrate his 90th birthday, we shouldn't forget that Pete Seeger is also one hell of a banjo player.