Accessibility links
Bush Touts Deals on Iraq, Immigration; Chides Iran President Bush on Thursday tried to put the best face on two bruising fights with Congress, one over funding for the war in Iraq, the other on immigration reform. He also said he would work with U.S. allies to pursue stiffer sanctions against Iran over Tehran's nuclear ambitions. 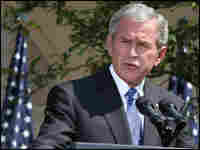 President Bush on Thursday tried to put the best face on two bruising fights with Congress, one over funding for the war in Iraq, the other on immigration reform.

Mr. Bush also said he would work with U.S. allies in an effort to bolster sanctions against Iran after a new U.N. report showed Tehran is accelerating its uranium enrichment program in defiance of international demands.

As Congress prepared for votes in the House and Senate on the Iraq war-spending bill, Mr. Bush said the compromise legislation showed that Americans continue to support the U.S. effort in Iraq.

The bill reflects "a consensus that the Iraqi government needs to show real progress in return for America's continued support and sacrifice," he said.

The legislation would fund the war through September and set out a series of benchmarks that the Iraqi government will be asked to meet. But the compromise language waters down earlier congressional demands that would have required a set of binding benchmarks for progress as a condition for continued funding.

Although the benchmarks still exist, the White House can unilaterally bypass them if they are not met.

The president noted that the goals set out for the Iraqi government "will be difficult; it's going to be hard for this young government."

In exchange for dropping restrictions on the military, Mr. Bush agreed to accept about $17 billion in spending added by Democrats to fund domestic and military-related projects.

Even Democrats who endorsed the deal said they were disappointed with it.

"I hate this agreement," said Rep. David Obey, the Wisconsin Democrat who heads the Appropriations Committee.

But Obey said it was the best deal that Democrats could manage because "the White House is in a cloud somewhere in terms of understanding the realities in Iraq."

At the news conference, Mr. Bush also talked about the bipartisan immigration proposal negotiated by his administration and leaders in Congress, a bill that faces an uncertain fate.

He said many Americans were "rightly skeptical" of the legislation.

"It's a difficult piece of legislation and those who are looking to find fault with this bill will always be able to find something," the president said. "But if you're serious about securing our borders, and bringing millions of illegal immigrants in this country out of the shadows, this bipartisan bill is the best opportunity to move forward."

Still, Republicans and Democrats placed strict new conditions on the immigration measure on Wednesday, voting overwhelmingly to slash the number of foreign workers who could come to the U.S. on temporary visas, capping the guest-worker program at 200,000 a year.

On Iran, the president said he was "sympathetic" to the people of Iran and that he is "sorry they live under a government that insists on a program the rest of the world has condemned."