Accessibility links
Trout Season: A Fish Tale Growing up in fly-fishing country, food writer Carol Guensburg developed a taste for the fresh-caught trout that was a family staple. Whether wild or farm-raised, pan-fried or smoked, the delicate but flavorful fish is still a favorite. 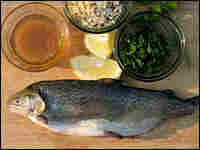 A fresh trout is the centerpiece of a Patagonia-inspired dish that melds toasted nuts, fresh herbs and brown butter. Carol Guensburg for NPR hide caption 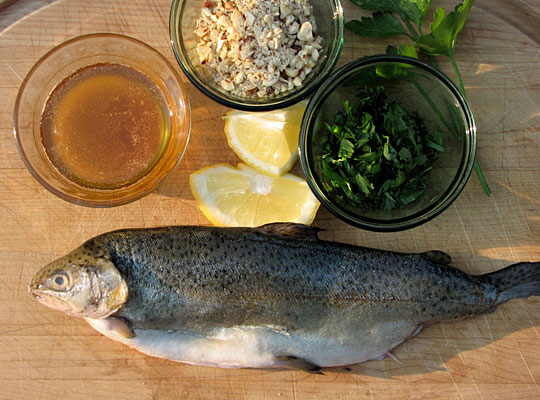 A fresh trout is the centerpiece of a Patagonia-inspired dish that melds toasted nuts, fresh herbs and brown butter.

Carol Guensburg, former food editor for the Milwaukee Journal, is a freelance reporter and editor based in Arlington, Va. She writes about food, education, journalism and more. Contact her at Carol.Guensburg@ comcast.net.

King Montgomery, seasoned angler, cast his line. "No one ever got a heart attack landing a trout," said Montgomery, an outdoor writer based in Burke, Va. While he prefers fishing for bass because they have more fight, he loves to "make a meal of fresh trout — out of the water and into the pan." He sighed happily at the thought.

I talked to Montgomery about catching and cooking trout at the annual Virginia Fly Fishing Festival in Waynesboro, a Blue Ridge mountain town straddling the South River. The South teems with stocked rainbow and brown trout, among other species. On this day, the shore teems, too — with fishing enthusiasts learning more about how to catch them.

To my chagrin, however, trout wasn't on the festival's menu. It ranks among my favorite fish to eat. It's delicate but flavorful, high in protein, low in fat and calories — depending on the preparation — and rich in beneficial omega-3 fatty acids. No wonder it's popular: The U.S. Trout Farmers Association reports that the nation's fish farmers last year raised more than 53 million pounds of the critters, mostly rainbow and mostly destined for restaurants, supermarkets and institutions. Some go for sport fishing, too, supplementing the wild trout such as rainbow, brook, brown and cutthroat found in various cold-water regions.

Fresh-caught trout was a staple of my childhood, whether sauteed on a camp stove or starring as Sunday dinner in our Wisconsin kitchen — especially in spring, when the season opened.

As kids, we froze our feet while wading and spin casting in the Bois Brule, a northern trout stream that empties into Lake Superior. No sacrifice was too extreme when it came to fishing, our dad maintained.

As an adult, I fished for trout occasionally — in New York's Catskills, where I started in the newspaper business — but more often sought it out at restaurants and from seafood counters. I've cooked or sampled lake trout poached in white wine, with leftovers shredded on a green salad; smoked trout baked in puff pastry and lapped with a mustard cream sauce; and sauteed trout sprinkled with chopped Serrano ham and parsley.

Most memorable was the trout I had a couple of years ago at a little restaurant in Argentina's Patagonian village of Traful. Pan-fried and simply dressed in brown butter and parsley, the trout arrived at our patio table bursting with flavor. My husband and I had spent the morning exploring along the nearby Limay River, the trout's likely source. If I ever get back, it'll be with a fishing rod and a skillet.

Chef Frank Stitt of Birmingham, Ala., honored by the James Beard Foundation in 2001 as the Southeast's best chef, gives trout regular play at his three restaurants. At his French bistro, Chez Fon Fon, it's sauteed and sent out with brown butter with capers and little fried potatoes. At Mediterranean-style Bottega Restaurant & Cafe, the fish is roasted whole, with lemon slices and dill tucked inside to heighten its light, fresh taste. At the Highlands Bar & Grill — which features French-accented Southern cooking and was a best restaurant nominee for the Beard Foundation Awards announced Monday — sauteed trout occasionally appears on the menu.

While Stitt appreciates "the romantic excitement of having a just-caught wild trout," he's usually not patient enough for the sport, he admits. "As far as flavor, I'd like to think the wild trout that are eating bugs and minnows are going to have a purity of flavor that is preferable — but that's not an option for us very often." Farm-raised trout ensures a steady supply to meet diners' requests, he says.

Whether trout is wild or farm-raised, it should have bright eyes, firm, glistening flesh and cherry-red gills and bloodline, which runs down the center of the fillet. Stitt says the fish should have "a clean, fresh smell. Get the fish merchant to show you the trout," he instructed over the phone.

The Virginia festival's organizer — fly fisherman, author and firefighter Beau Beasley — catches and releases far more fish than he keeps. Oh, he's fond of eating fresh trout — especially when wife Leila coats it with garlic-infused olive oil, and dredges it in a combination of panko and Italian-seasoned bread crumbs before oven frying — but his primary interests are in sport and conservation. The annual festival, launched in 2000, has raised more than $12,000 for conservation projects, mostly on the South River.

So maybe I'm doing the habitat a favor by getting a new fishing license with a trout stamp. I'll appreciate the scenery, even if nothing bites. As Beasley says, "Fish generally don't live in ugly places."

Roasted Trout With Dill And Lemon 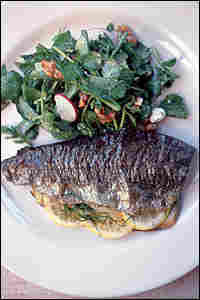 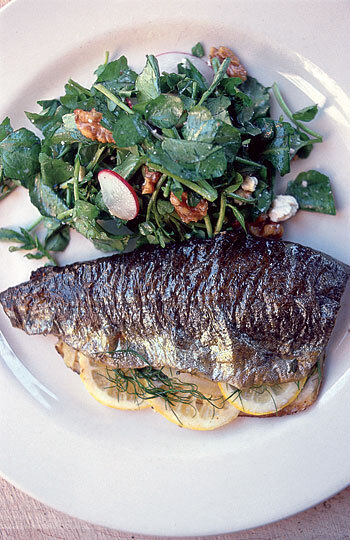 Roasted trout scented with lemons and dill gets high marks for luscious flavor and easy preparation. That's how Chef Frank Stitt prepares it at his Bottega Restaurant & Cafe in Birmingham, Ala. He shares the recipe in his new cookbook, Frank Stitt's Bottega Favorita: A Southern Chef's Love Affair With Italian Food (Artisan 2008).The recipe calls for creme fraiche, in which Stitt often grates horseradish for a little kick. He sometimes dresses up the salad with crumbled feta or shaved fennel, and tucks feathery fennel sprigs in the trout before roasting. Watercress fans will want to double the amount of the salad ingredients, including the radishes, walnuts and sherry vinaigrette. Stitt recommends serving the fish with little new potatoes, boiled and tossed with olive oil or butter, or polenta or grits.

Position a rack in upper third of oven; preheat oven to 500 degrees.

Season cavity of each trout assertively with sea salt and pepper. Stuff each with 2 to 4 dill sprigs and several lemon slices. Set aside.

Melt butter with olive oil in large ovenproof skillet over medium-high heat. When butter foams, add trout, place pan in the oven and cook for 4 to 5 minutes. Rotate the pan for even cooking; continue roasting until skin on top puckers or turns crispy golden brown, another 4 to 5 minutes. The flesh should just be opaque throughout. Be careful not to overcook.

While the fish roasts, toss the watercress, radishes and walnuts with the sherry vinaigrette. Divide this salad among four dinner plates, mounding to one side on each. Place a trout on each plate and spoon a dollop of creme fraiche next to each. Serve immediately.

Combine the shallot, sherry vinegar and a good pinch each of salt and pepper in a small bowl. Let stand for 10 minutes. Whisk in the olive oil in a slow, steady stream. Taste and adjust the seasonings. The vinaigrette will keep for several days in a jar in the refrigerator. 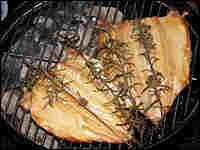 The trout are topped with fresh rosemary sprigs and smoked over hickory chips ... Carol Guensburg for NPR hide caption 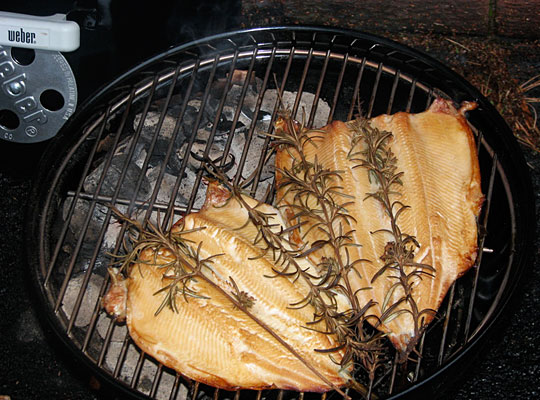 The trout are topped with fresh rosemary sprigs and smoked over hickory chips ... 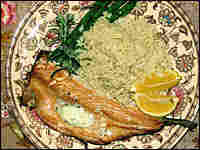 ... then served with a dollop of rosemary butter on top. Carol Guensburg for NPR hide caption 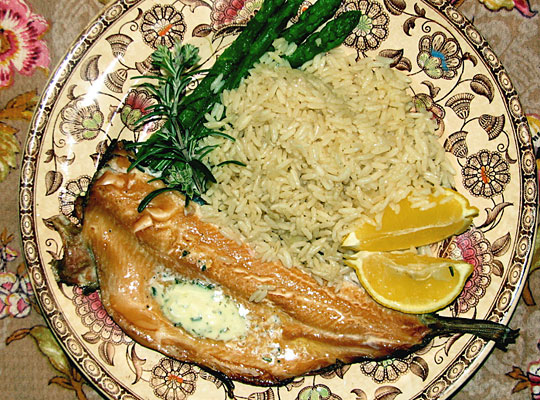 ... then served with a dollop of rosemary butter on top.

Trout soaks in brine for a day before grilling in this recipe from the delightful but sadly out-of-print Crabtree & Evelyn Cookbook: A Book of Light Meals and Small Feasts (Stewart, Tabori & Chang Inc. 1989). The cookbook's menu "for the armchair camper" includes potato pancakes with pepper relish and strawberries with strawberry vinegar.

Hickory chips or other wood chips for barbecuing

Rinse trout thoroughly in water, place in a 3-quart enamel or other nonreactive pan and add salt and 2 quarts water. The fish should be completely covered with brine. Cover and refrigerate 24 hours.

Place 2 to 3 handfuls of hickory chips in a basin of cold water and soak 30 minutes. About an hour before serving the fish, build an indirect barbecue fire by placing charcoal on one side of the kettle of a barbecue grill. When charcoal becomes gray-white, drain hickory chips and toss them onto fire. Oil grill, cover the kettle and leave the fire for 5 to 10 minutes.

Remove trout from brine, drain and rinse under cold water. Using a sharp knife, remove heads — slicing behind gills — and slit down center along backbone on inside to butterfly each trout (or have your fishmonger do this ahead of time).

Place trout, skin side down, on grill away from hot coals so they cook over indirect heat. Lay fresh rosemary sprigs on fish. Cover barbecue grill and let trout smoke for about 40 minutes (check periodically) or until flesh is cooked through and flakes easily when probed with a fork.

Remove trout from the grill. Cut each in half lengthwise and serve topped with dollops of rosemary butter.

In a small bowl, combine butter and minced rosemary. Beat until blended. 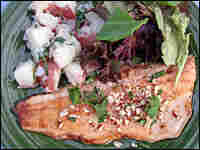 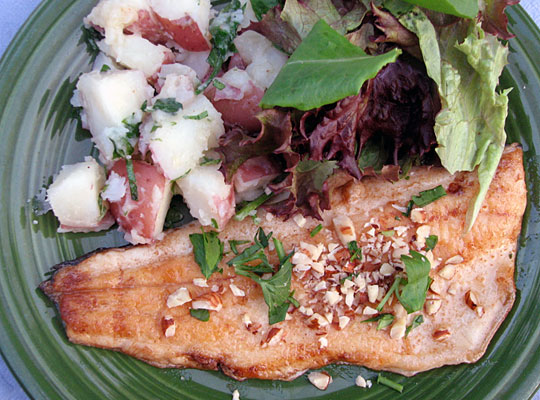 Here's a variation of the simple dish that seduced me in Patagonia. Sauteed trout, served with a gloss of brown butter and a squeeze of fresh lemon juice, gets crunch from toasted hazelnuts or almonds and extra color from minced parsley. You'll probably wind up with extra brown butter; save it, covered and refrigerated, to flavor steamed vegetables.

Heat butter and oil in skillet over medium-high heat. Add trout, skin side down, and fry until edges begin to turn golden, 3 to 4 minutes. Turn over and finish cooking, about 3 minutes. Fish is done when flesh turns opaque and flakes easily when probed with a fork. Be careful not to overcook.

Transfer fish to plate. Drizzle each fillet with a small spoonful of brown butter mixture. Garnish with parsley and, if desired, toasted nuts. Serve with lemon wedges.

* Note: Toast whole hazelnuts or almonds on baking sheet in 350-degree oven until lightly browned. (Hazelnuts will split.) To remove hazelnut skins, take baking sheet from oven and empty the nuts into a tea towel. Wrap nuts tightly for about 5 minutes, then vigorously rub then, still wrapped. Much of the skin will be loosened and can be discarded.

Place the butter in a heavy saucepan with a light-colored bottom so you can monitor the browning. Over moderate heat, melt the butter and cook, stirring frequently, until the butter solids collecting on the saucepan's bottom turn a deep golden brown with a nutty scent. Remove from heat; skim off and discard foam. Serve warm.