Accessibility links
Grieving Chinese Family Quells Memories To Heal Two days after the earthquake struck southwestern China last May, Melissa Block interviewed a couple as rescue workers searched for their toddler son and his grandparents who were buried under a collapsed apartment building. Block checks in with the boy's aunt to see how the family is coping with the loss of its loved ones. 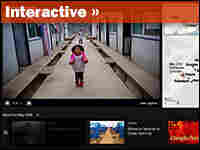 Listen To Stories, See Photos Of Coverage Then And Now 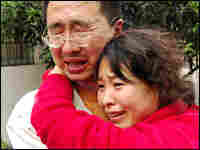 Last May, Wang Wei (left) and Fu Guanyu lost their 22-month-old son and his grandparents in the earthquake. All three died after a six-story apartment fell on them. According to Wang's sister, the couple is still too emotionally fragile to talk. Andrea Hsu/NPR hide caption

Melissa Block (left) stands with Wang Dan (far right) last May as they assess the scene two days after the earthquake. Wang Dan lost her parents and her nephew when an apartment building collapsed on them. Andrea Hsu/NPR hide caption 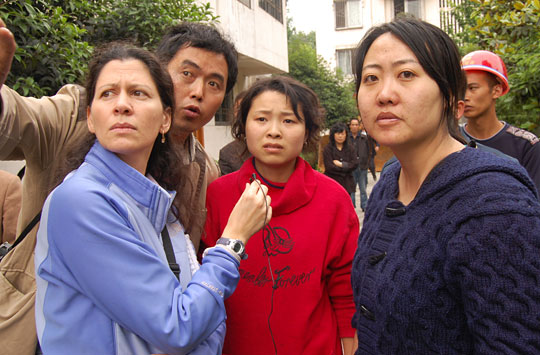 Melissa Block (left) stands with Wang Dan (far right) last May as they assess the scene two days after the earthquake. Wang Dan lost her parents and her nephew when an apartment building collapsed on them.

More From The Blog

A Welcome Reunion, One Year Later

Last May, I was in Sichuan, China, when the earthquake struck and killed an estimated 90,000 people. Two days after the quake, I spent the day with a young couple as rescue workers searched for their toddler son and his grandparents, who were buried in the debris of a collapsed six-story apartment building. By the end of the day, the young boy and his grandparents were found: All three were dead.

I've thought a lot about this couple since then.

The mother, Fu Guanyu, and the father, Wang Wei, had allowed me to be witness to a day of excruciating grief. It was a day that ended with the knowledge that their only child — a boy not quite 2 years old, named Wang Zilu — was dead. He died in the arms of his grandparents.

From time to time, I've exchanged e-mails with the young boy's aunt, whom I met that day. Her name is Wang Dan.

When I came back to Sichuan this year, she told me that her brother and sister-in-law were too emotionally fragile to talk. But she said she could tell me a bit about how her family is doing. We talked after dinner at a restaurant in Dujiangyan.

Wang Dan, I just saw you just about a year ago, on the worst day of your life, and it's great to see you again and looking so good.

I'm really happy to see you, too.

I think a lot of people who heard the story last year are wondering how your family is doing one year after the earthquake; what would you tell them?

You know after the earthquake, we were homeless. In the beginning, we stayed in tents. Later we moved to temporary housing. Conditions in Dujiangyan were poor. Living there made us think of all the sad things that had happened. So my brother and sister-in-law moved to a dormitory provided by his work, and I did the same.

On July 30, after we found a good burial spot for my parents and my nephew, we buried their ashes. For us, a funeral was a way of saying goodbye. And after we said goodbye, we all felt a bit of relief in our hearts.

Tell me about your brother Wang Wei. Are you able to talk to him about what happened during the earthquake and how your family is doing now?

After we had taken care of things, we didn't talk about the earthquake again. Because every time we talked about it, he'd start thinking about a lot of things and he'd get depressed. He might have been happy the minute before, even the second before. But mention the earthquake, and his face would suddenly turn dark.

And is that true of your sister-in-law Fu Guanyu, too?

My sister-in-law is stronger. But because my nephew died in the quake, seeing children makes her very sad.

It sounds like you haven't been able to share your memories of your parents and your nephew Wang Zilu.

No matter how wonderful the memories, we don't dare think back on them. Actually, just bringing this up makes me sad. Even seeing my father's handwriting — it's really painful.

Has Wang Wei ever been able to tell you why he can't talk about your family or his son, what it is about it that makes it worse?

He's a very introverted person — he doesn't talk much. Also, he lost so much. After the earthquake, we were all keeping a close eye on him out of fear that he might be thinking about suicide or something like that.

Now he thinks burning incense and praying to Buddha are useless ... burning paper money, all those traditions. Because our parents were really good people. They treated their friends well, treated their children well. My brother said, "If there really is a God, if there really is a Buddha, then people this good shouldn't have died. God or Buddha should have protected them and his son." But what happened in the end? A disaster that deprived him of everything. So all the praying, all the worship, it can't make his sadness go away.

A Ray Of Hope: A Baby

Wang Dan tells me her brother's grief is so strong he couldn't bring himself to visit the gravesite on a mountainside near Dujiangyan on tomb-sweeping day, or Qing Ming, when families honor the dead. He can't bear any mention of his son, or his parents. He has deleted all the family pictures on his computer and cell phone.

Rising from this profound sadness comes a ray of hope, though. Fu Guanyu and Wang Wei decided to have another child. She's pregnant, and the baby is due next month.

"If the child is born healthy and stays healthy, it will be a great consolation for them," Wang says.

Of course, the baby would never replace Wang Zilu, but it's a new start.

"Yes, it is a new start," Wang says. "And one that we hope will gradually mend their hearts."