Accessibility links
In Somalia, Piracy Is An Attractive Career Option To most of the world, Somalia could easily be renamed the Land of Pirates. Hijackings on the high seas have become routine off the coast of this East African nation. Known for their pragmatism, Somalis have taken to piracy because it's a multimillion-dollar industry that works.

Third in a series 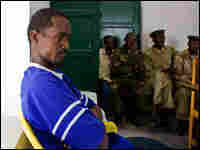 In 2006, Somali fisherman Farah Ismail became a pirate. But before he was able to hijack any ships, he was caught red-handed with his pirate gear — weapons, a boat, a ladder — and sentenced to 15 years in Mandhera prison near Berbera, Somalia. Brendan Bannon for NPR hide caption 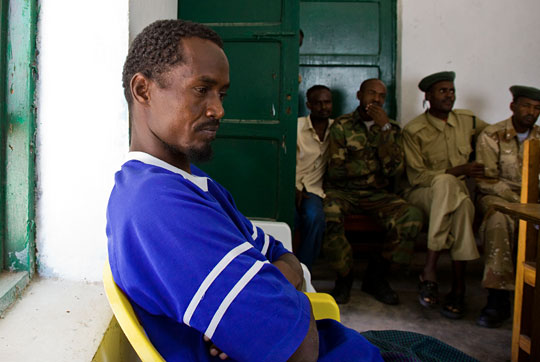 In 2006, Somali fisherman Farah Ismail became a pirate. But before he was able to hijack any ships, he was caught red-handed with his pirate gear — weapons, a boat, a ladder — and sentenced to 15 years in Mandhera prison near Berbera, Somalia.

At Somalia's Mandhera prison, near Berbera on the Gulf of Aden, Farah Ismail can attest that some pirates are luckier than others.

"My aim was to go and capture the ships. But it was not successful. Both times I failed," he says.

Ismail may be the worst pirate in the world. He is a 38-year-old fisherman from Somaliland who decided to make the switch to piracy in 2006. That's when, he says, he got mad at foreign vessels fishing illegally off the Somali coast.

So he got a crew together and went to sea on his boat, looking for a trawler to hijack. He says he wanted to teach the owners a lesson and make a little ransom money on the side. But, Ismail says, the ship got away.

"Because at that time, we didn't know what we know today. We were just trying to pursue them using our normal fishing boat. So, theirs was faster," he says.

Ismail bought a better engine for his boat, a satellite telephone, an AK-47, pistols and a retractable ladder. He also recruited experienced pirates from Somalia's Puntland region to do the job right.

By then, he was less interested in targeting illegal fishing vessels and more interested in gaining a magnificent ransom from piracy. He needed to catch a yacht — or better yet, a cruise ship.

"And I could love if I got one with tourists, with many people onboard," he says.

But before Ismail could get his boat into the water, his neighbors ratted him out to the Somaliland authorities. That was last October. He was sentenced to 15 years in prison.

"They caught me red-handed, with everything — the weapons, the boat, everything," Ismail recalls.

Members of the Somaliland coast guard patrol the waters off Berbera. The coast guard relies on informants onshore to monitor and alert them to suspicious activity along its shores. Brendan Bannon for NPR hide caption 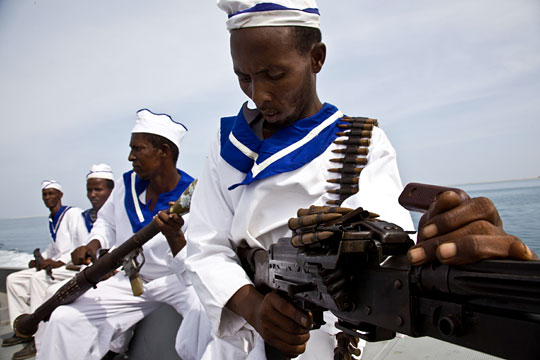 Members of the Somaliland coast guard patrol the waters off Berbera. The coast guard relies on informants onshore to monitor and alert them to suspicious activity along its shores. 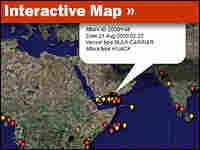 It is called Somalia, but to most of the world it could easily be renamed the Land of Pirates. Havoc on the high seas has become routine off the coast of this East African nation, with scores of hijackings so far this year. Last month, Navy SEALs rescued an American merchant captain after Somali pirates raided the Maersk Alabama as it was making its way around the Horn of Africa to deliver aid.

For nearly 20 years, Somalia has endured political chaos and bloodshed. The impoverished country's 10 million people are living without a formal economy or a functioning central government.

But, known for their pragmatism, they survive.

For many Somalis, choosing a line of business is the most practical decision of all. What works is right, and what doesn't work is wrong. That is why piracy has taken hold in the country: It's a multimillion-dollar industry that works.

'A Pirate Until I Die'

"I'll be a pirate until I die. We are not animals. We are human. We are normal people. We share with the people," says a pirate who goes by the name Abshir Abdullahi Abdi and the nickname "Boya."

Boya, from the Puntland region of Somalia, says he knows piracy is tearing at the seams of traditional Somali values. But he says he places more value on the money — and the mouths it can feed.

"We understand what we're doing is wrong. But hunger is more important than any other thing," he says.

To understand why piracy works in Somalia, it helps to know some basics about the place.

Roughly speaking, Somalia is shaped like the numeral 7. But the nation isn't half as lucky.

On the top of the 7 is Somaliland, which is on the Gulf of Aden. Somaliland calls itself an independent republic and steers clear of the commotion in the other regions. It has had fewer problems with pirates, in part because there is peace in Somaliland. The region also has a small coast guard.

On the corner of the 7 is Puntland, which is on both the Gulf of Aden and the Indian Ocean. Puntland means "Land of Spices." But the region is better known for human trafficking and piracy. Most hijacked ships are moored off Puntland.

And at the bottom of the 7 — and fully on the Indian Ocean — is an area known simply as The South. The capital, Mogadishu, is here, as are most of the Islamists fighting the current president.

Many in Puntland's government are said to be in league with the pirates. And with more than a dozen hijacked ships off the Puntland coast, piracy clearly has some local support.

Fishing villages in the area have been devastated by illegal trawlers and waste dumping from industrialized nations. Coral reefs are reportedly dead. Lobster and tuna have vanished. Malnutrition is high.

Sometimes doing a bad thing is the only way to improve the situation for yourself and the people you love, says a pirate known as "Milk Sucker" — who also goes by the name Abdul Rashid Osman.

His nickname suggests he became a pirate at a very young age. And it paid off. Pirate money got his siblings out of southern Somalia and gave him a different life in neighboring Kenya.

Sequestered in a Nairobi hotel room for fear of being discovered by either the police or fellow pirates, Milk Sucker says he worked his way up from indigent lobster fisherman to leading an attack boat in hijackings.

He says he will never go back to piracy. "I got my share," he says.

Now, he says he wants to move to the West and maybe work in a chicken-processing plant.

"If I were educated when I was in Somalia, then I could work at offices. I cannot do this job, and I cannot start education. What I can do is cut chickens. This is my way," he says.

To Catch A Pirate

Rashid Abdi Sheik is a Somalia analyst for the International Crisis Group in Nairobi, Kenya; he is also Somali. Rashid offers a pragmatic remedy for piracy off Somalia. He says it takes a pirate to stop a pirate — the same way it takes a computer hacker to stop a hacker. Rashid recommends deputizing former pirates from Puntland.

"These are people who know the sea. ... They are bright, successful, smart and courageous, as well. This is the right material for making a coast guard. So why should we not do it?" he says.

But the pirates interviewed for this report say they have little incentive to work against their brothers on the high seas — that is, unless the price is right.