Accessibility links
Stimulus Money Put To Work At Superfund Sites More than $600 million will be spent to aid the cleanup of Superfund sites across the country. The Environmental Protection Agency hopes the cash injections in the projects not only will accelerate recovery of the land, but also will create jobs. 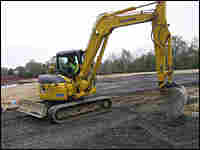 This excavator is finishing up one of dozens of cleanups that the EPA is doing as part of the Welsbach and Gas Mantle Superfund site. The contaminated site will get more than $25 million in stimulus funding. Elizabeth Shogren/NPR hide caption 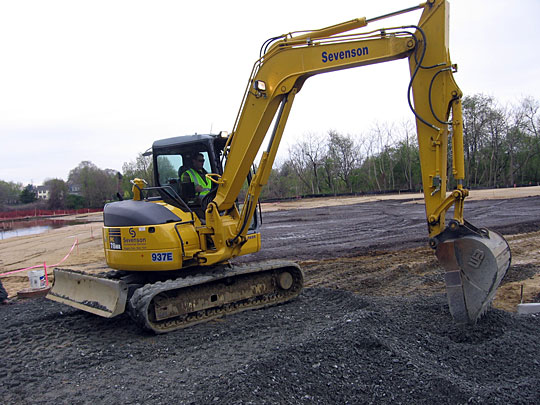 This excavator is finishing up one of dozens of cleanups that the EPA is doing as part of the Welsbach and Gas Mantle Superfund site. The contaminated site will get more than $25 million in stimulus funding. 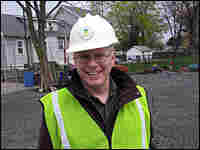 Rick Robinson manages the Welsbach and Gas Mantle Superfund site for the EPA. He says the stimulus funding will pay for most of the cleanup on Fourth Street, where the General Gas Mantle factory used to stand. It and another factory kept the lights on in homes and factories across the country a hundred years ago, but they left a toxic legacy of radioactive thorium. Elizabeth Shogren/NPR hide caption 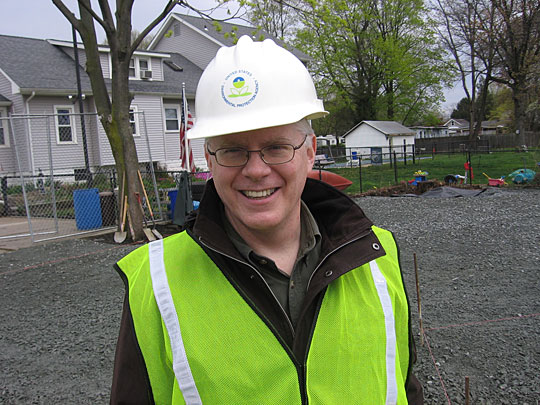 Rick Robinson manages the Welsbach and Gas Mantle Superfund site for the EPA. He says the stimulus funding will pay for most of the cleanup on Fourth Street, where the General Gas Mantle factory used to stand. It and another factory kept the lights on in homes and factories across the country a hundred years ago, but they left a toxic legacy of radioactive thorium.

A hundred years ago, the Welsbach and General Gas Mantle factories kept the lights on across the country by making a popular precursor to the light bulb called a mantle, but they left a toxic, radioactive legacy behind in Camden and Gloucester City, N.J.

As part of the economic stimulus package, the Environmental Protection Agency plans to spend more than $25 million to accelerate the cleanup at the Welsbach and General Gas Mantle Superfund site. It's one of 50 contaminated properties getting injections of cash totaling $600 million from the recovery funds. That's more than double what the EPA usually spends on these projects each year.

"For our program, this is a big infusion and very welcome," says Walter Mugdan, who heads EPA's Superfund program for New Jersey and New York.

The area targeted by the Welbach and General Gas Mantle cleanup is just across the Delaware River from Philadelphia. It has long been heavily industrial, but it is also home to many low-income residents who live in 100-year-old row houses and small single-family houses.

The stimulus money will be spent on Fourth Street, which is closed to traffic because of the radiation risk. There are both abandoned and working factories in the cleanup area, and it's just down the road from a port.

Rick Robinson, who manages this site's cleanup for the EPA, holds a pancake radiation meter over the cracked asphalt.

"The empty lot there — that's the former General Gas Mantle building that we demolished back in 2000. It was an abandoned building that was falling down. It had high levels of radiation on the inside," Robinson says as his meter beeps louder and more quickly.

"The more it beeps, the more radiation is being emitted," he adds.

Left To Pick Up The Bill

Welsbach and General Gas Mantle provided the bright white light their customers wanted by soaking tiny cotton mesh bags in a radioactive material called thorium. Welsbach, the bigger of the two companies, made up to 250,000 mantles per day. People used the mantles in gas lamps, which were similar to modern camping lanterns.

After electricity came, both companies went out of business, and now the EPA is left to pick up the bill.

The agency considers the site a priority project because long-term exposure to thorium can cause cancer, and many people live and work in close proximity to the toxic waste.

"The half-life of thorium is 14 billion years, so this waste will not go away," Robinson says. "Unless we take care of it, we will leave it for the generations of the future to deal with."

Robinson says because of the funding from the recovery package, he'll be able to use the more than $16 million he usually gets each year to pay for other cleanups, possibly some Little League fields, a storage lot for the port and some houses.

Already, Robinson's crews have cleaned up factories, swimming pools backyards and basements, but the project is only about one-third finished.

The contamination spread out to scores of properties because workers from the mantle factories took the radioactive waste and dumped it in low-lying areas around the two communities.

Robinson expects to put people to work running excavating equipment, driving trucks, monitoring and containing radiation risks, doing office work and loading the waste onto rail cars to be taken to hazardous waste dumps in Idaho and Utah. And local police officers will get extra work because the cleanups are in such rough areas that Robinson often hires them to protect his crews.

"At every step of the way, some number of jobs will be created. But we don't know the exact number," Mugdan says.

He says the EPA will track how many jobs are created here and at 49 other superfund sites that are in line to get stimulus dollars.

Many of these projects are in a low-income area with multiple sources of pollution. The agency expects that the stimulus money will hasten environmental development in these depressed areas.

"Camden needs all the help they can get from the EPA," says Helene Pierson, executive director of Heart of Camden, a community development group that has been rehabilitating old row houses for 25 years. Some of them were homes of workers from the mantle factory many decades ago.

Pierson's group is building a 99-seat theater on a lot where an abandoned building stood until the EPA did a cleanup. Decades ago, it was a store that sold thorium-soaked mantles. The lot is right across the street from Sacred Heart elementary school.

"I think there's always a big huge fear factor. That part definitely was scary for me, that it was known that there was thorium there," Pierson says.

For the sake of the children, she says, she is relieved that the EPA removed the radiation. She says the theater is an example of how EPA cleanups and her rehabs are restoring healthy community life and chasing away prostitution, drugs and crime.

The Fourth Street cleanup is only about four blocks from the school. Pierson hopes it also will help revitalize her community and attract some much needed jobs to Camden.