Accessibility links
The New Republic: Numbers Game In times of war, statistics abound. But where do all those numbers come from? In Gaza, even the facts aren't always straightforward when it comes to fatalities. 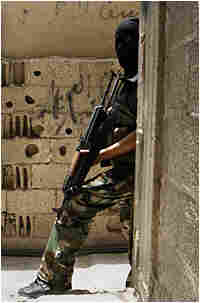 On December 27, the first morning of Israel's Operation Cast Lead offensive in the Gaza Strip, Khalil Shaheen was driving in the Tel al-Hawa neighborhood of Gaza City when he spotted a friend and got out of his car to say hello. Suddenly, an Israeli F-16 appeared in the sky and dropped a bomb on a building 200 feet up the road--one of many such bombings part of the IDF's 22-day effort to stop Hamas rocket and mortar attacks on southern Israel.

The building, which Shaheen identified as a Hamas internal security headquarters, immediately collapsed, sending an observation tower flying 100 feet, hitting a woman. Pandemonium broke out on the street, where Shaheen says hundreds of schoolchildren and adults were shouting and running from the blast. Predicting the F-16's next target, Shaheen tried to restrain a group of children from running to the street's west side. A minute later, the plane dropped four missiles on "the ex-prisoners museum," a community center and exhibition space for former inmates of Israeli jails. During that particular bombing, says Shaheen, no Hamas fighters were killed, just a woman in a nearby apartment building, a man in his shop, and two young girls leaving school.

Though Shaheen is not a Hamas soldier, he is on the front lines of a different battle: the P.R. war that has erupted since the end of hostilities. As head of the Economic and Social Rights Unit for the Palestinian Center for Human Rights (PCHR), he is one of the people behind the fatality figures beamed across the world this past winter. On March 12, the PCHR released its most recent statistics: 1,417 dead, including 926 civilians, 255 non-combatant police officers, and 236 fighters. It was PCHR's numbers, particularly the high proportion of civilian casualties, that in large part led to an international outcry against Israel, and "its worst diplomatic crisis in two decades" according to The New York Times. In the weeks since, the European Union has frozen its upgrade of relations with Israel, Norway's chief prosecutor is considering a request to charge Israeli leaders with war crimes in Gaza, and the United Nations is sending a fact-finding team to the region--all arguably based, to a large extent, on Shaheen's numbers.

During the war, Shaheen and a team of about 35 professional and volunteer field researchers braved the crossfire to visit hospitals, interview victims' families, and document the location and circumstances of every single war casualty. "It's a very dangerous job," says the soft-spoken Shaheen, who spent his nights sleeping in his brother's basement, and his days "moving, moving" up and down the Strip for up to 11 hours, all the while fielding hundreds of phone calls from media outlets hungry for numbers of the dead and wounded. "I am so lucky to be alive," he says.

So you can imagine his dismay upon hearing that the IDF is disputing his fatality figures. On March 26, two months after the unilateral cease-fire and two weeks after Shaheen released his stats, the IDF parried with its own fatality count: 1,166 dead, 709 of them Hamas terror operatives, 295 "uninvolved Palestinians" (89 under the age of 16, and 49 of them women). In addition, the IDF identified 162 men whose names had not yet been attributed to any organization.

If the IDF's alternate numbers are accurate, they paint a very different picture in terms of the toll on civilian life. How is there such a big disparity between the two sets of numbers? Though the IDF has refused to elaborate in any detail on how it obtained its figures, insight into its methods can be gained in the cluttered basement home office in Toronto of retired Israeli intelligence officer Jonathan Dahoah Halevi. "PCHR's list is inaccurate," he asserts. "I get the impression they intentionally tried to inflate the civilian numbers."

He begins to rattle off indictments. "Why is Said Siyam"--the de facto defense minister of Hamas--"listed as a civilian?" he asks. "Muhammad Dasouki Dasliye. Do you know who he is?" Halevi says that Dasliye was a Palestinian Resistance Committee operative and suspect in the terrorist attack against three American security guards in Gaza in October 2003. "Nizar Rayan," Halevi chuckles. "He's a civilian?" In fact, news reports describe Rayan as a militant cleric who mentored suicide bombers and sent his own son on a suicide mission in 2001, killing two Israelis.

Halevi, a pugnacious father of two, is an insider, a former IDF analyst who works days as a counterterrorism consultant but counts Gaza fatalities in his free time. "It's an intellectual challenge," says the dark-haired, 44-year old, whose parents immigrated to Israel from Yemen. It will take him six months to research all 1,400 of PCHR's names, comparing them to a database of thousands of terrorist operatives he has compiled, as well as whatever he finds on the Internet.

As of last month, Halevi has a list of 171 people the PCHR defines as civilians that he claims he can prove are actually combatants affiliated with Hamas or other terrorist groups. His contention is based on a simple principle: When fighters die, they don't just leave behind a body, a family, and eyewitnesses--they leave a paper trail. Martyrdom posters, photographs of funerals, articles celebrating heroes' exploits, lists of payments to families--these sources help Halevi disprove that a particular fatality was a civilian as opposed to a fighter. Intelligence analysts around the world are following this paper trail, and they don't just work for the Shin Bet or CIA. In fact, in the era of the Internet, vast amounts of intelligence are available to anyone with fluent Arabic, a little training, and a lot of time and patience.

Halevi's macabre hobby began during Israel's 2002 Operation Defensive Shield, the Israeli incursion into six West Bank cities that targeted Hamas and other terrorist cells responsible for a number of recent suicide bombings. Halevi was perplexed. "It made no sense that on the one hand, Palestinians claimed their fighters were performing valiantly, but at the same time they said they were being massacred." So the dogged and methodical Halevi compiled his own list of fatalities in the Jenin refugee camp. "I read everything I could get my hands on--militant web sites, articles, books of fighters' memories. I found that 65 percent of [Palestinians] killed in the Jenin refugee camp were terror operatives, including some children," he says gravely. The Palestinians later independently reduced their fatality number from an estimated 500 to 56.

It was addictive. Soon Halevi found himself spending all his free time cross-checking Palestinian fatality lists. In his opinion, the best and most trusted lists belonged to the Israeli human rights organization B'Tselem and PCHR. "These data banks have an enormous influence," he says. "I found PCHR statistics in UN reports...The UN relies on them." So Halevi published dozens of articles on a popular Hebrew news sites, reporting his findings, always precise, never overstating his claim, but scathing nevertheless. Soon he found himself in a war of words with a B'stelem's spokeswoman, who wrote on Israel's News1 web site, "Halevi is exploiting a Palestinian family's tragedy for political gain" and "he dances on Palestinian blood." For his part, Halevi says both organizations are frequently inaccurate, and attributes their contortions to their political motives: "The former chairperson of the board of B'Tselem said in an interview that the organization's goal is a one-state solution. PCHR has the same goal. They reject Israel's existence as a Jewish state."

Halevi is already knee-deep in PCHR's latest list from Cast Lead. He has produced a spreadsheet with the names of 230 police fatalities cited by both the Gaza police department and PCHR. For 171 of these, he provides the name of the faction they fought for as well as brief biographies, such as "a munitions expert" or "arrested by Israel in 1993 for weapons acquisitions for suicide missions." Most of the 171 moonlighting policemen are listed as operatives in the Qassam Brigades, with others belonging to Palestinian Islamic Jihad and the Palestinian Resistance Committee.

"This information wasn't hard to find," Halevi says. Type one of the names into a Google search and up pops a web site with photos showing the Gaza cop sporting a martyr's headband and M-16. Halevi grants that many of these policemen did actually perform police duties like patrolling streets or directing traffic. "But then they get a call from their friend who says, 'Come on, it's time for a mission,'" Halevi says. "One of the police casualties was even affiliated with al-Qaeda."

Shaheen stands by his numbers. "The police force is totally civilian," he insists. While ten of the fighters on PCHR's list are described as policemen, more than 250 of those described as policemen are labeled civilians. Many Gazans enter the police force because they are poor and need the money, he explains. "I can assure you that all these people were working in police traffic or as guards."

Many of the disparities between the PCHR and IDF numbers seem to be definitional. The IDF has repeatedly stated that any member of Hamas security forces--armed or unarmed--is fair game. Shaheen has a much narrower definition of an uninvolved civilian: "According to international humanitarian law, all armed people are classified as militants and all the people who are unarmed [are civilians]," he says. So if the person was armed at the time of death--which he or his fieldworkers determine by investigating the bodies as they arrive at the hospital--he'll count them as a militant. If the person is not armed, his team will check with family members, neighbors, political parties and Palestinian armed factions to determine the deceased's status as a militant or a civilian. He also checks press releases issues by armed factions. "[The IDF] can say whatever they want," he says. "I mean, [these are] facts on the ground."

But even facts can be subjective. For example, Halevi accuses Shaheen's organization of mislabeling Hamas cleric Nizar Rayan as a civilian. Shaheen explains that Rayan was killed in an Israeli airstrike on his home. There are jihadist posters of Rayan all over Gaza, and yet, "I cannot count him as a militant or fighter," Shaheen says. Rayan was unarmed with his wives and children when he was killed, Shaheen explains. "I cannot count this case as a fighter because he didn't participate as a fighter in the offensive. He was a civilian the whole time--going to the mosque, praying, coming back to his house."

Both agree, however, that the war does not end when the fighting stops. "In every war there are two components," says Halevi. "The first is the battle itself, defeating the other side, and the second is presenting the facts of what happened." If a country is not vigilant, he warns, "The other side will rewrite your history."

Simona Weinglass is a freelance writer based in Washington, DC.