Accessibility links
Elbow: The Weirdest Joint On the upside of the recent flu mania, one oft-neglected, seldom noticed and, come to think of it, very weird body part is receiving a new wave of attention: the elbow. 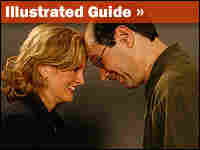 A video by the Maine Medical Society attempts to make sneezing into your sleeve fashionable and patriotic.

On the upside of the recent flu mania, one oft-neglected, seldom noticed and, come to think of it, very weird body part is receiving a new wave of attention: the elbow.

Health officials are recommending that people cough into their elbows as the preferred way to handle expectoration. And almost-surgeon-general Sanjay Gupta of CNN recommends touching elbows instead of shaking hands or bumping fists.

All of a sudden, the status of elbows has been elevated. Elbows are everywhere. Elbows are Elvis.

"Elbows are the new hands," as one comedian said. You need your elbows, according to the reggae singer on Sesame Street, "when you want to scratch your back. Or swing a bat to give a ball a whack." One of the Top 20 compact discs in England now is The Seldom Seen Kid by, you guessed it, Elbow.

The first couple believe in elbows. Michelle Obama wears dresses that flaunt hers. On the day before President Obama was inaugurated, he painted a wall in a homeless shelter. Wielding a roller, he remarked to reporters, "You do need to apply some elbow grease — just like everything we do."

Funny that elbows, which are designed to keep people away, are now being used to bring people together.

In sports, elbows can be dangerous. Most kickboxing competitions forbid the use of elbows. In college basketball, a player who throws an elbow at another can be called for a flagrant foul — even if the transgression is unintentional. Referees have also tried to clamp down on flying elbows in hockey, soccer and other sports. But that pointy elbow bone can be so deadly useful.

Elbows can be vulnerable, too. Cricket players suffer from "poisoned elbows." Tennis elbow can occur in anyone — not just a tennis player — who makes repetitive movements with an arm. In April, the American Academy of Orthopedic Surgeons reported that an injury stemming from throwing too many baseball pitches has become so prevalent in young athletes that doctors and nurses are calling it "little league elbow."

Speaking on behalf of the association, Donald Zoltan — a sports medicine specialist — said, "Coaches and parents need to remember that a child's bones, muscles, ligaments and tendons are still growing, making them more susceptible to injury, especially from overuse."

For James Cook, an orthopedic veterinarian at the University of Missouri, there may be a pot of gold at the end of the elbow. He and another inventor have received a patent for a prosthetic arm hinge. The elbow, he says, "is critical to do everything we take for granted — combing hair, brushing teeth, personal hygiene, eating, et cetera, et cetera, et cetera — and all the things we love to do like art, writing, sports."

Designing a replacement joint posed special challenges. The elbow, Cook says, "is a very complex joint — actually three joints in one — that is so important to our activities of daily living."

Elbows are, after all, L-shaped and bowlike. Elbow macaroni is beloved by Mickey Rooney, used in a creamy mac and cheese recipe by celebrity chef Paula Deen, and glued down on school-project mosaics by children everywhere.

A poetry reading, wrote former Poet Laureate Donald Hall, "helps toward understanding ... because the poet's voice and gesture provide entrance to the poetry: a way in, a hand at the elbow."

Under various conditions, the elbow can be a fulcrum, a handle, a point of contact with the concrete world. And a time-tested and efficient method of moving beverage from bar to mouth.

It is also a joint of whimsy. "Never stick anything in your ear smaller than your elbow" is an oft-invoked maxim. Another is "Kiss your elbow and you'll change gender."

When anthropologist Donald Johanson spotted a 2-inch fragment of bone gleaming in the Ethiopian sun in 1974, he realized it was from a human elbow. The shard turned out to be a part of a 3-million-year-old skeleton, dubbed Lucy, that provided new glimpses into the origins of humans.

The elbow is where three bones meet: the humerus, the radius and the ulna. A nerve near the ulna is called the funny bone, and banging it against something else can be bizarrely painful.

That's why Sanjay Gupta's el-bump suggestion is a little puzzling. It doesn't take much contact to send shock waves through the fragile funny bone.

In a way, when it comes to finding a more sanitary greeting than handshakes or fist bumps, touching forearms — the so-called Xena cross — might make more sense than knocking elbows. Bending the radius and accidentally banging one ulna against another is neither humerus nor funny.