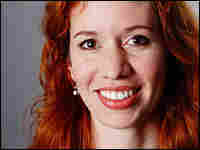 Camilla Taylor, a lawyer for the LGBT rights group Lambda Legal, was lead counsel on the case Varnum v. Brien, representing six same-sex Iowa couples who wanted to get married. In April, the lawsuit went before the Iowa Supreme Court — and the court voted unanimously that the state's same-sex marriage ban violates the constitutional rights of gay and lesbian couples.

Taylor speaks with Fresh Air host Terry Gross about her work with and on behalf of the LGBT community.