Accessibility links
Movie Review - 'Star Trek': That Final Frontier, Boldly Reapproached After six TV series and 10 motion pictures, you'd think there would be few places in the universe a starship could still "boldly go," if the point is going where no one has. NPR's Bob Mondello says you may be surprised. 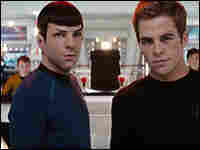 'What Gives You The Right?'

The Appeal Of Origin Stories: Of Kirk, Locke, And Wolverine 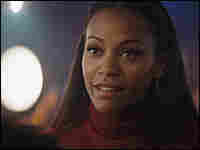 Abrams amps up the reboot's buzz factor by casting magnetic young actors in the iconic roles: Zoe Saldana as the xenolinguistics genius Uhura, above ...

You'd think that after six TV series and 10 motion pictures, there'd be few places in the universe a Federation starship could still "boldly go where no one has gone before." But you may be surprised.

If an opening 10 minutes of photon-blasting doesn't grab fans by their collarless collars, the introduction of one of the major characters almost certainly will: He's sandy-haired, cocky, kinda charming, a risk-taker — and not real fond of being told what to do, as a hovercycle-riding policeman discovers when he tries to pull over the 11-year-old James Tiberius Kirk, who's joy riding in a stolen car.

Baby Kirk gets just a few moments of screen time — just enough to prove that director J.J. Abrams has rethought his Star Trek reboot from the ground up. A couple of scenes later, you'll recognize a more familiar Kirk: flirtatious in a collegiately Shatnerish way, chatting up a pretty Starfleet cadet in a bar. Her name's Uhura.

And Kirk the patient listener surfaces a bit later, when a nervous student doctor is strapped in next to him on a space shuttle and starts a rant about how if there's a crack in the hull, their blood'll boil in 13 seconds.

Sparks of recognition? Well, the aim here is to court a new generation of fans without alienating the true believers speaking Klingon in the box-office lines. Director Abrams was in diapers the year the original Star Trek series went on the air, but he's pledged to honor the past while bringing in cool young performers — Sulu played by Harold (without Kumar), Scotty by that Shawn of the Dead guy.

And he promised to revive what was starting to seem like a walking-dead franchise by replacing '60s-vintage techno-babble with something more modern. In short, to set phasers on stun with a killer opening sequence, beam up a bit of past-altering time travel to guarantee a new future, and to make sure that new future stays familiar by keeping personality quirks front and center.

Especially Kirk's intuitional yin and Spock's rational yang. Youth makes a big difference with these guys. Chris Pine's 20-something Kirk is a frat boy chafing at his every contact with logic-obsessed Spock; the latter (Heroes supervillain Zachary Quinto) is an academic nerd so wet behind the pointy ears that you can't wait to see him lose his Vulcanized cool.

While no villain was ever going to steal focus from these guys, the writers haven't done Eric Bana's snarling Romulan any favors. His nefariousness is so beside the point that the film takes a timeout to let Leonard Nimoy offer a benediction to the new cast.

Of course, the point of a reboot isn't really to tell a tale; it's to ensure that the underlying enterprise can go on. Abrams has done that, for sure, and if it feels toward the end of his Star Trek that the various plot points have been scattered to the edges of the known universe, well ... it's hard to imagine anyone caring much why we're plunging ahead at warp speed, when the ride is so insanely satisfying.