Accessibility links
Marijuana Farms Take Root In National Parks Marijuana is one of America's biggest cash crops, and growers have brazenly moved pot farms onto public lands and national parks. Rangers and other officials now patrol the land in search of these farms, many of which are run by networks with connections in Mexico. 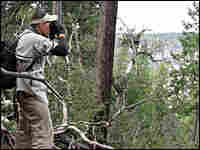 Steve Yu, a special agent with the National Park Service, looks for evidence of marijuana farms in the backcountry of Yosemite. Martin Kaste/NPR hide caption 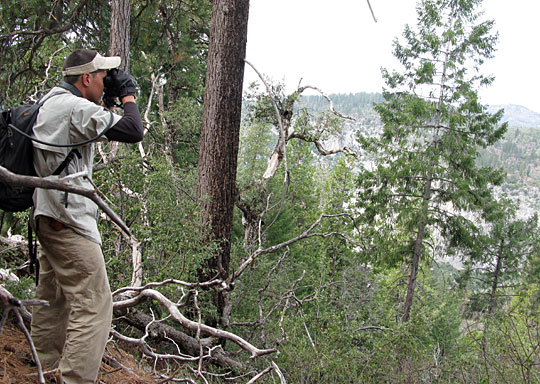 Steve Yu, a special agent with the National Park Service, looks for evidence of marijuana farms in the backcountry of Yosemite. 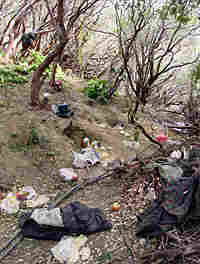 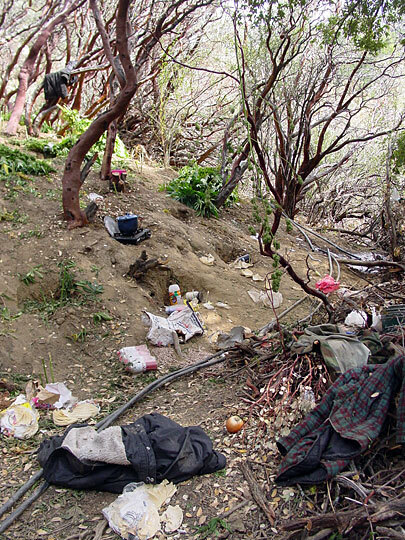 A former camp in Yosemite where marijuana farmers lived.

It's common knowledge that marijuana is one of America's biggest cash crops. In 2008, law enforcement confiscated more than 5 million plants in California alone.

What's less known is that much of that pot is grown on public lands. And, increasingly, the covert pot farms are moving into pristine lands — even parks.

Marijuana cultivation has been found in more than a half-dozen national parks on the West Coast; the latest to join the list is North Cascades National Park in northern Washington state, where a farm was raided last summer.

In Yosemite, one of the crown jewels of the national park system, park rangers are constantly searching for new pot farms. Just a few miles from El Capitan and other popular tourist spots, Special Agent Steve Yu and Park Ranger Chris Kuvlesky are sneaking through the ponderosa pine. They're on what they call a "creep": a stealthy hike through an area that's been used in the past by pot growers. They step carefully, because even the snapping of a dry branch could be enough to telegraph their presence to growers who might be hiding in these woods.

Pot farms tend to follow the same rough design: terraces cut into a remote hillside, with some trees and bushes left standing to provide cover from the air. An irrigation hose taps the nearest creek; at one Yosemite pot farm raided in 2007, the hose ran for nearly a mile — buried and camouflaged the whole way. Yu admits he has a grudging respect for the effort that goes into these "gardens."

"I don't know how these guys do it," he says, referring to the growers who live out in these woods all summer, carrying in hundreds of pounds of food, fertilizer and chemicals, and living under tarps. "When we get the handcuffs on them, when we get our hands on them, it feels like these guys are carved out of oak."

Relatively few of the marijuana-tenders are caught. At the first sign of trouble, they usually slip away through the brush. That's the main reason these pot farms are on public land: It's easy to cut and run.

But law enforcement agencies are learning more about these marijuana gardens. For one thing, they're not stand-alone projects. Investigators say pot farms in parks and national forests are often part of larger networks.

A recent Drug Enforcement Administration investigation of a Mexican crime family's alleged crystal methamphetamine ring led agents to discover that the family also had a marijuana-growing operation on the side. They call it a major enterprise; a Seattle-based DEA agent (anonymous here because he works undercover) says it stretched across several Western states.

"They had a plan in place, they had stash houses, they had living places for people and they had people whose role was just to provide food. Each person had their little skill set that they applied to the job, and the leaders never got their hands dirty," the agent says.

The agent says family members — most of them Mexican citizens — drove in from around the country to help with the farms. They moved up the West Coast in a wave, following the spring planting season as it moved north.

The DEA says the family — known as the Barragans — has been known to drug enforcement for decades, both in Los Angeles and in Mexico. Some of the Barragans are now in federal custody near Seattle, awaiting federal trial. Their lawyer would not make them available for comment.

Middle Managers In The Marijuana Ring

"It's all controlled by the Mexican cartels in Mexico, where the command and control sits," he says.

But other DEA officials are reluctant to use the word "cartel."

Gordon Taylor is the DEA's assistant special agent in charge in Sacramento, and he has years of experience investigating pot farms in California. He says the large-scale farms on public land are run by networks.

"Most of these groups are headed by Mexican nationals that live in the United States illegally," he says.

But he stops short of calling them "cartels."

"When I hear somebody use the term 'drug cartels,' what that means is the identified drug cartels that are operating down in Mexico," Taylor says. "We have not seen direct evidence tying [the marijuana gardens on public lands] to the cartels down in Mexico."

Those who have experience with the pot farms also draw a distinction between the bosses and the workers.

"Most of them are poor people from large families in Michoacan," says Tim Zindel, a federal public defender in Sacramento who has represented many of the garden tenders caught by federal law enforcement. He calls them "disposable workers" — campesinos who sometimes barely know where they are.

Still, their growing presence in the backcountry intimidates people who spend a lot of time there, people like Chris, a graduate student who asked not to share his last name. In 2007, while doing fieldwork in California's Plumas National Forest, he accidentally uncovered a hidden irrigation hose. He looked up and saw an armed man heading his way.

Chris tried to tell the man he didn't care what the hose was for, but it became clear the man didn't understand much English. Chris remembers him having an "air of malice."

"The fact that he was hiding the gun from me, like he wasn't trying to scare me, like he was trying to get me to go there. I would have preferred if he'd pointed the gun at me," Chris says.

Chris ran, and caught a lucky break when the man lost his footing. Even before his close call, Chris was concerned about the presence of hidden pot farms in the Sierra foothills. He says it even influences where he decides to do fieldwork.

That level of insecurity has not taken hold yet in the national parks. The chief ranger in Yosemite, Steve Shackelton, says he believes his staff is holding the line.

"People coming to Yosemite shouldn't fear this problem. Our job is to ensure that their visit is a safe visit, and we will ensure that. We do ensure that," he says.

At the same time, he's worried. In the national forest next to Yosemite, the pot farms have become almost commonplace. He has seen the effects over there — erosion, pesticides, garbage dumps — and he considers the pot farms a "fast-moving threat" to one of America's most beloved national parks.