Accessibility links
Movie Review - White-Hot 'Outrage' Over The Capitol Hill Closet Kirby Dick's documentary takes a long look at closeted politicians with anti-gay voting records, and it's hard not to conclude that the film is justified in its fury. Ultimately, though, Outrage is most eloquent about power and its traps.

Kirby Dick's film about the pernicious effects of the political closet is tendentious — and timely, if only because of the ongoing debate about same-sex marriage. Magnolia Pictures hide caption 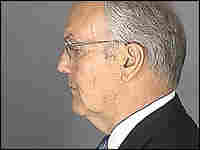 The police mug shot of former Idaho Sen. Larry Craig, one subject of discussion in Dick's film. Craig was arrested in 2007 by an undercover officer who said Craig had solicited sex from him in a Minneapolis airport restroom. He initially pleaded guilty, then attempted to withdraw that plea; throughout the scandal, he denied that he is gay. Magnolia Pictures hide caption 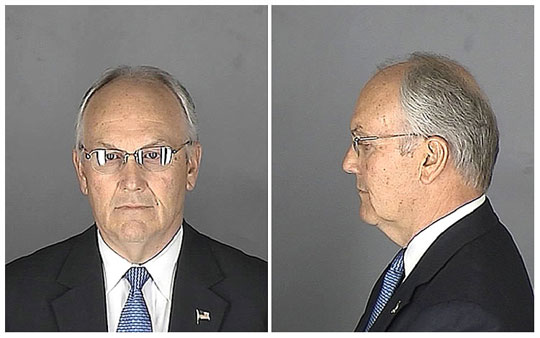 The police mug shot of former Idaho Sen. Larry Craig, one subject of discussion in Kirby Dick's film Outrage. Craig was arrested in 2007 by an undercover officer who said Craig had solicited sex from him in a Minneapolis airport restroom. He initially pleaded guilty, then attempted to withdraw that plea; throughout the scandal, he denied that he is gay.

'This Town Is Full Of Gay People'

'They Made Their Own Choices'

Kirby Dick On The Political Closet's Dark Shadows May 6, 2009
Outed Staffer Dan Gurley: From The RNC To LGBT Activist May 6, 2009
Kirby Dick's Look Inside The Hollywood Ratings System Sept. 13, 2006 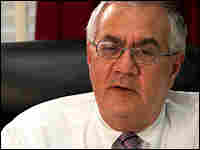 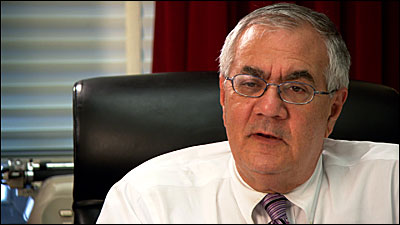 Barney Frank, the gay chairman of the House Financial Services Committee, is one of several once-closeted lawmakers interviewed in Outrage.

It's tempting to feel sympathy for the subjects of Outrage, a documentary about closeted politicians who lie or dissemble about their own homosexuality.

The closet, after all, is a dreadful place to live for anyone — let alone someone faced with the intense social scrutiny that comes with being a public figure. So you can almost come to understand how difficult these politicos' lives must be. On the other hand: What is the right word, exactly, for a "family-values" champion who damns gays and lesbians while pursuing a little same-sex action on the side?

One word offered up in this tendentious and provocative documentary: "hypocrite."

As it builds its case, investigates the evidence, floats rumors, substantiates gossip and consults with gay journalists and activists who have been on this beat for years — established muckrakers like Michelangelo Signorile and Larry Kramer, and the newsmaking blogger-activist Michael Rogers — the film tries to address its incendiary topic with as level a head as possible.

But director Kirby Dick is anything but objective about his subject and his agenda, which is to dismantle a widespread public deception. The men he targets aren't merely hypocrites, the movie insists, they're hypocrites with real power to affect peoples' lives — and a self-hating psychology that leads to the active suppression of gay rights. Perhaps the most powerful strategy of this docu-j'accuse, in fact, is a series of animated graphics showing the voting record of allegedly closeted pols: no on hate-crimes legislation; no on gay marriage; no, most repellently, on funding for HIV/AIDS.

The film concerns itself not only with politicians, but also with the staffers and operatives who keep Washington working. It looks back at Ronald Reagan's infamous reluctance to even mention the word "AIDS" until scores had died — an outrage underscored by the duplicity of men like Terry Dolan, an influential conservative organizer capable of maintaining an utter hostility to gay rights while simultaneously frequenting gay bars. That Dolan himself died of AIDS is the most grotesque of the ironies noted in Outrage.

While he focuses largely on right-wing closet cases, Dick is an equal-opportunity investigator. His film notes with some jaundice that the former mayor of a major U.S. city — a Democrat whose homosexuality has long been an open secret in his metropolis — was equally complicit in the deadly silence of the early AIDS era.

The poignancy of this perversity isn't lost on director Dick, a filmmaker who has previously examined the extreme masochism of a performance artist (Sick: The Life and Death of Bob Flanagan, Supermasochist) and the illogical moralizing of the Motion Picture Association of America (This Film Is Not Yet Rated).

Although Outrage tries to be mindful of the right to privacy, one of Dick's main objectives is to expose the queasy reluctance of the mainstream media when it comes to investigating, reporting on or simply acknowledging the homosexuality of prominent figures who haven't declared themselves. (I'm proscribed from naming names right now, for example, by longstanding NPR policy on the subject.) Whether or not there exists a "brilliantly organized conspiracy," as one title card hyperbolizes, Dick gives plenty of evidence of media complicity in maintaining a bogus status quo.

"Gay American" James McGreevey, the outed former governor of New Jersey, emerges as one of the most eloquent figures profiled, testifying in an extended interview to the anguish of living a fractured, deceitful life. The skills required to stay in the closet, he shrewdly notes, are also those that help one maintain political power.

Another documentary remains to be made about the peculiar position of women who either marry gay men unknowingly or actively consent to prop up their deceptions. For now, the various (and suspiciously convenient) girlfriends of one major swing-state governor are but one element of a persuasive case made here about a man with aspirations to be the 2012 Republican presidential candidate. Evidence of that governor's homosexuality, Outrage claims, is widespread and well sourced. Even more convincing is the film's examination of the proposition that he will do anything necessary to remain in power — and in the closet.

In fact, power — and the corruption that adheres to those who pursue it — is the true subject of Outrage. Given the raging policy debates over gay marriage, the film is a timely and effective reality check on homophobic delusion. But in what it has to say about power and compromise, it also speaks to that more fundamental dysfunction in our politics — one that's sure to live on, in one form or another, long after a new generation comes to power never having suffered in the shadow of the closet.

Given the nature of this film's media critique and the NPR editorial policy mentioned above, the writer has asked that his byline be removed from this review.