Accessibility links
The New Republic: A Gay Supreme Court Justice? Two of the people whose names are being tossed around as Supreme Court possibilities are lesbians. The obvious, first-glance answer is that it would be a political minefield. But further reflection reveals that it is eminently doable. 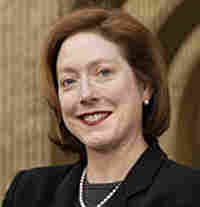 Politico notes that two of the people whose names are being tossed around as Supreme Court possibilities are lesbians: Kathleen Sullivan and Pam Karlan, both of Stanford Law School. (For more about Karlan, see this impassioned endorsement from Bill Stuntz, who has written some terrific pieces for TNR over the years.) Obviously, putting a lesbian on the court (or a gay man, for that matter, although none appear to be under consideration) would mark a wonderful step forward for the country. But is it politically possible?

The obvious, first-glance answer is that it would be a political minefield. But the more I think about it, the more I am convinced that it would be eminently doable. And not only doable: It's even plausible to envision a scenario where it ends up helping Democrats by damaging conservatives.

First, history suggests that the country is willing to accept Supreme Court nominees from minority groups even at a relatively early stage in their integration into American political life. When Louis Brandeis was nominated to the court in 1916, anti-semitism was still pervasive. When Thurgood Marshall was nominated in 1967, the country was still in the throes of the civil rights struggle. Yet both men were confirmed.

More significantly, though, nominating a lesbian to the court would put conservatives in a politically awkward position. As the gay rights battle has come to center more and more on the specific question of marriage, conservatives have frequently insisted that they are not anti-gay, just opposed to gays getting married. Conservatives are attached to this distinction because they know that, without it, they end up looking like bigots. But if they decide to make an issue of a Supreme Court nominee's sexual orientation, they would effectively be conceding that this distinction was a lie. (After all, could there be any more baldly anti-gay political maneuver than bashing a Supreme Court nominee because of her sexual orientation?) Given that most Americans are no longer comfortable with transparent homophobia (while conservatives still have the majority on same-sex marriage, liberals enjoy majorities on various other gay-rights questions, such as workplace discrimination), it would be a risky move for conservatives to toss aside their cherished distinction between anti-gay sentiment and anti-gay-marriage sentiment. So maybe they would think twice about raising sexual orientation during a confirmation battle. And if they decided to do it anyway, it could become one of those defining moments where the American political center gets a glimpse at the fundamental ugliness undergirding a particular crusade--and turns decisively in the other direction.

Wishful thinking? Maybe, maybe not. Of one thing I am confident: If it doesn't happen this time, it will happen soon enough.