Accessibility links
What's Your Can't-Miss Summer Blockbuster? The summer movie season is underway in multiplexes across the country. Denver Post film critic Lisa Kennedy has details on the rest of the big summer flicks. She's especially excited about Star Trek and Julie & Julia.

The summer movie season is underway in multiplexes across the country.

Some Older 'Star Trek' Fans May Skip This Voyage

Some Older 'Star Trek' Fans May Skip This Voyage 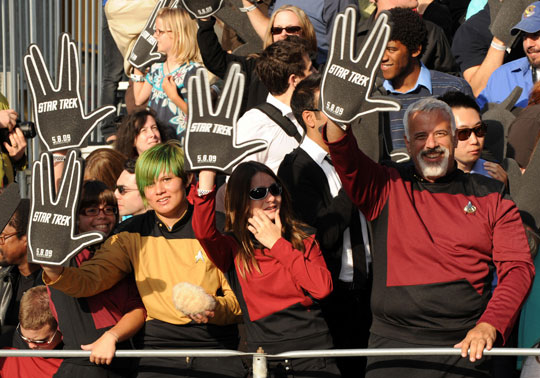 Fans gather outside Grauman's Chinese Theatre in Hollywood for the April 30 premiere of the movie Star Trek in Los Angeles.

Kirk And Uhura Exchange Pleasantries In A Bar

The new Star Trek movie, directed by Lost creator J.J. Abrams, opens nationwide this week. It's a prequel that explores the story of how the main characters on the original Star Trek met and came together on the Starship Enterprise. All the characters — Captain Kirk, Spock, Dr. McCoy, Sulu, Uhura — are played by a new, young cast.

This movie is an attempt to give new life to the Star Trek franchise and attract a new generation of fans, but some older fans are wary and say the ads they've seen on television are directed only toward the young.

They mention graphics that leave them cold, phrases such as, "This is not your father's Star Trek."

Sharon Martin, who began watching Star Trek when she was 11, says it's almost like they're dissing the generations who grew up on Star Trek.

"They keep running this ad on TV," she observes. "It says, 'Forget everything you know.' This does not seem like a positive come-on for someone like me." So she says she will wait and watch it on DVD.

But John Ordover says the new movie is extremely respectful of "your father's Star Trek." Ordover started watching the series when he was 6, and later edited Star Trek novels for 10 years and wrote two episodes of Star Trek: Deep Space Nine, one of the many spinoffs.

"They have found an absolutely brilliant way to simultaneously show tremendous respect for everything that has gone before, while wiping the slate clean and being able to present the story fresh from the beginning," he says.

At its core, Ordover adds, "America is an optimistic country, and Star Trek has always said the future is going to be a fun place to live and that we will overcome our petty differences."