Accessibility links
The Fat Alien Sings: A Klingon-Language Opera Because it's billed as a prequel, the new Star Trek movie has at least one notable omission: the bumpy-headed warriors known as Klingons. But that isn't stopping one experimental theater company from going boldly where no theater company has gone before. Seriously. 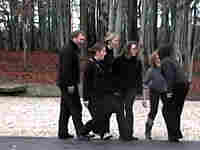 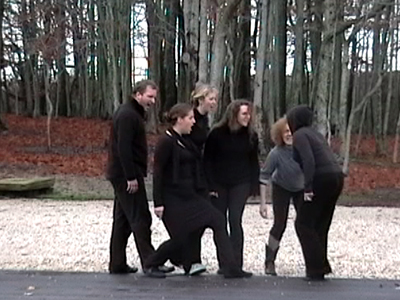 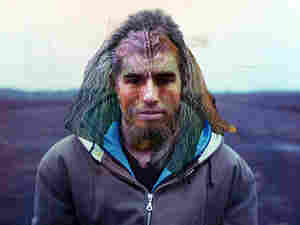 The new Star Trek movie opens Friday, and it includes the usual suspects: Vulcans, Romulans and, of course, humans. But one race gets short shrift: the Klingons.

The new movie is billed as a prequel — it's set before the strident, bumpy-headed warriors were introduced to the Star Trek saga. But Klingons have not been forgotten — far from it. In fact, they're the subject of an ongoing research project that explores a long-neglected art form: Klingon opera.

A Myth Of Mythical Proportions

Every culture has its epic tales of mighty warriors. Odysseus blinds the Cyclops. Beowulf rips out the arm of Grendel. For Klingons, there's Kahless, who dices 500 warriors with a sword forged from his own hair and some help from the Lady Lukara. To celebrate their victory, they make love in the ankle-deep blood.

The story of Kahless the Unforgettable is a cornerstone of Klingon mythology, as told in the opera u. Members of the Klingon Terran Research Ensemble — based in The Hague, the Netherlands — have been workshopping u for the last year with an ambitious goal: to mount the first authentic performances of Klingon opera here on earth.

"The first time I read that proposal, I thought they were freaks," says Jorn Weisbrodt, the creative director for the Byrd Hoffman Watermill Foundation in New York. "But they're really being very serious. And I think it really is the result that matters, and I found the result quite fascinating and interesting and strange and weird."

The Watermill Foundation selected the Klingon Terran Research Ensemble for a residence last fall at the Watermill Center on Long Island. It's the creative home of avant-garde playwright and director Robert Wilson, perhaps best known for his work with composer Philip Glass on the opera Einstein on the Beach.

In fact, watching the members of the KTRE, you'd probably think that these actors were just working out another experimental theater piece. There were no space suits, no bumpy heads, no communicator badges. Working in the pristine white gallery, the performers engaged in musical combat across a hexagonal ring in standard black concert wear.

In Search Of The Perfect Scream

Crafting u has required a great deal of research. Beyond the handful of episodes from The Next Generation and Deep Space Nine that reference Klingon opera, none of the actual music survives.

The KTRE is connected with the ArtScience department of the Royal Conservatoire in The Hague. The KTRE's Web site states, "The project strives to learn the ways of Klingon music through theory and practical application. The Klingon have a rich musical culture that until now has been largely overlooked by the musical establishment."

Floris Schoenfeld, artistic director of the KTRE, says that all he has to go on in trying to re-create u is the opera's written text and an ancient treatise called the paq'jachchcu.

"That means the book of the perfect scream," Schoenfeld says. "This is basically the theory manuscript of Klingon music."

Scream theory sounds like territory for psychotherapy, but Schoenfeld doesn't seem to be expressing repressed childhood traumas. Nor is he merely a science-fiction geek with too much time on his hands.

He says he sees himself contributing to the development of a culture, like Marc Okrand. The linguist began inventing the Klingon language more than 25 years ago as a consultant for Star Trek II: The Wrath of Khan. His audiobook Conversational Klingon is designed expressly for tourists visiting the empire.

Thanks to Okrand's work, thousands of people are conversant in Klingon — and, reportedly, some 100 speak it fluently.

"I created a bunch of words and the rules of grammar to put them together," Okrand says. "So that's the groundwork. But if it just sits there in a book, it doesn't do anything. The interesting thing about Klingon is that people have taken it and done new things with it.

"People are translating the works of Shakespeare into Klingon. They're translating all kinds of songs. I saw someone perform 'Alice's Restaurant' in Klingon, which was amazing. I saw people doing a riff on Abbott and Costello 'Who's on First?' and people who didn't even understand the language got the joke."

If the idea of Klingon Shakespeare strikes you as, well, ludicrous, the Klingon Terran Research Ensemble is actually a serious outfit. Schoenfeld has been exploring these strange new worlds like a cultural anthropologist. In trying to recreate Klingon opera, he says he's dealing with the same kinds of problems faced by anyone studying ancient Greek music or trying to stage so-called authentic works.

"We're assuming a lot of things simply because we don't have the access," Schoenfeld says. "We can't go to Qo'noS and hang out with the Imperial Opera. That's just not an option right now. And we're hoping, of course, for some grants to allow that."